Researchers at University of New South Wales (UNSW) Sydney are using wearable technology with a modified eye-tracking device to shed more light on the risk factors of myopia onset and progression. 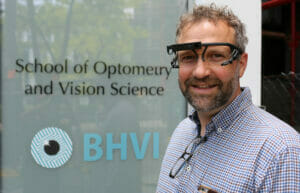 Peter Wagner with the wearable device he is using in his research.

Research suggests exposure to higher light levels, such as those experienced outdoors, defers myopia onset, however the exact role of a combined amount of light and near-work on myopia onset or progression is not entirely understood.

Current available technology, such as static attachable light and distance sensors, can monitor the quantity of light and the amounts of exposure to various distances of objects these sensors are pointing at. However, it is unable to monitor the eyes naturally, which are not static, instead changing direction and distance of gaze rapidly and frequently. Furthermore, there is currently no way to objectively quantify the amount of ‘near-work’, the dioptric landscape or visual content.

PhD candidate Peter Wagner, at Brien Holden Vision Institute, is hoping to overcome these limitations by combining two novel technologies: a head-mounted eye-tracking device with a miniature 3D camera. This device can quantify the time individuals spend on focussing at particular distances throughout the normal course of an activity; an important part of the visual behaviour associated with ‘near-work’.

He hopes that obtaining accurate, long-term, high frequency data for the described variable, will enable an objective analysis of their influence on myopia and its progression.

Graduating in 2005 with a Diploma of Ophthalmic Optician Optometrist from the University of Applied Sciences, Berlin, Germany, Mr Wagner has a personal reason to be interested in myopia – he lives with the condition and anticipates that his daughter will also be affected by myopia.

“Myopia could be as little as an inconvenience, a burden to our vanity, if not for the association of higher degrees of myopia with vision loss. Unfortunately, we know too little to yet determine why the eye is growing too long… my research aims to deliver important insights into the effects of our ever-changing visual environment on axial length, myopia onset and progression,” he explained.

“The eye can rotate with speeds of a few hundred degrees per second and will hover around a small area for just a few dozen milliseconds. Describing visual behaviours necessitates measuring eye-movements for hours. Equally important is the ability for eye-trackers to match gaze direction onto a two-dimensional image, disregarding spatial (distance) information from the scene. This spatial information provides important cues for our visual system to trigger accommodation and convergence, the process that lets us see sharply.

“So, to be able to measure visual behaviours accurately, in real world conditions, we need portable technology that until now has not been available. Luckily, promising technology is emerging – for high-frequency eye-tracking we use a device called Pupil Labs Core and we have substituted the world camera with PicoFlexx – a miniature time-of-flight camera. Supported by UNSW’s High Performance Computing, we were able to develop software that combines both technologies,” said Mr Wagner.

He said findings from research using the device will support an understanding of visual behaviours that are conventionally quantified in self-reporting questionnaires exploring myopia related behaviours.

“These conventional research methods using questionnaires provide valuable data, but are susceptible to the risk of bias or subjectively influencing the data and its collection,” he explained.

Mr Wagner, who managed corporate optometry practices in Austria and Australia for 12 years before undertaking his PhD at UNSW, is conducting the research under the supervision of Professor Arthur Ho and Associate Professor Juno Kim.

Kids’ Eyewear: Ticking all the Boxes

Ode to My Dear Professors