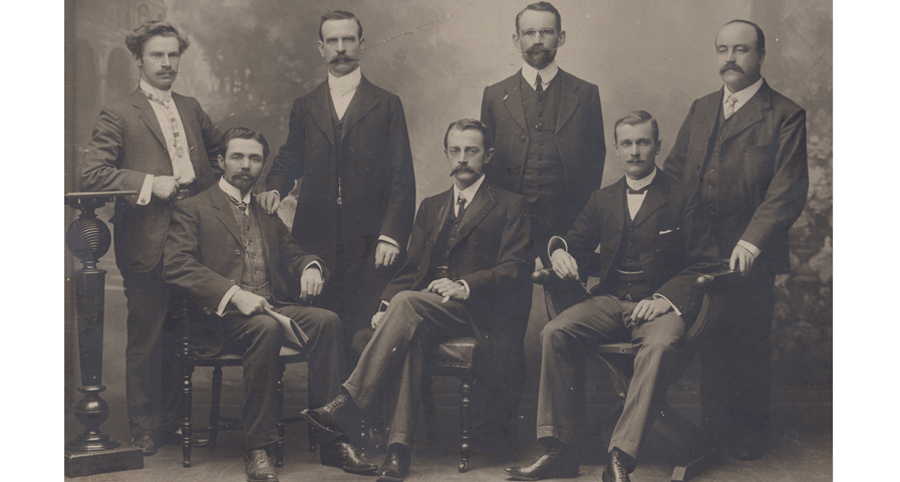 The year was 1908 and the state of Queensland (not to mention the Northern Territory) was certainly a frontier part of Australia, albeit a growing one.

The game of rugby league had just established itself, breaking away from the traditional rugby union…and a small group of Brisbane opticians were making their own history.

The 100 year history of the OAA Qld/NT has now been well documented in a recently released book entitled “A Century of Service” and sub-titled “100 Years of Optometrists Association of Australia in Queensland and the Northern Territory”.

In launching the book, Shannon Pugh, the longest ever serving president of the OAA, Queensland and Northern Territory division, put it this way: “The names Finkernagel, Sankey Fraser, Brier, Nissen, Tilley, Hulsen and Denby have little meaning in optometry today, but 100 hundred years ago, on 1 October 1908, they gathered in Brisbane to form the Institute of Ophthalmic Opticians, the forerunner to Optometrists Association Australia Queensland/NT Division. I dedicate this book to their memory and hope that as you read it you might like to reflect on their contribution and the significant progress the profession has made in that time.”

Mr. Charles (Chas) Sankey Fraser was elected as the Institute’s first President and was re-elected in 1914. He continued his involvement from 1910 to 1921 and from 1924 to 1927 as an Examiner on the Institute’s Examining Board, passing away in 1953.

During the Institute’s second meeting on 5 November 1908, rules of the Institute were adopted. Rule three stated that any candidate for membership must pass a theoretical examination in optics, to be entitled a “degree” of the Institute. This is the first known official education of opticians in Queensland.

Minutes of the second AGM on 3 February 1910 show that the objects of the Institute of Ophthalmic Opticians of Queensland were:

The first national conference was held on 3 December 1918, in Melbourne, with Queensland member Mr. A.P. Greenfield in attendance.

In 1919, Mr. Greenfield strongly urged the Institute to have a united front in the cause of legislation to close the door on inexperienced practitioners.

Documents show that in 1925, Mr. J.P. Fry urged his Council colleagues to accept the recent AOA decision that Associate and Fellowship Degrees should be introduced. The Associate Degree could be obtained by any member of State Institutions by applying to their Secretary before 31 March 1926. After that it would be by examination only.

In 1928, the Institute of Ophthalmic Opticians of Queensland changed its name to the Institute of Optometrists of Queensland and the following year, a committee was created to formulate a proposal for the performance of optometric work in public hospitals. A response was received from the British Medical Association (now the Australian Medical Association) advising that it did not approve of qualified optometrists assisting at public hospitals.

The year 1935 saw the beginning of the first classes at the University of Queensland with the School of Anatomy. Fifteen members and seven student apprentices were enrolled and the next year, Mr. K.B. Ward became the first optometrist appointed to the staff of the Brisbane General Hospital, a position he held for 10 years.

During WWII the Institute worked at obtaining Army recognition for optometrists listed in the forces. The aim was for the Defence Forces to form an Optical Unit.

At the 1949 Council meeting, rules and clinician duties were established for the beginning of part-time training by the Queensland College of Optometry in conjunction with the Brisbane City Mission. Mr. V.N. Verney was appointed the

Four years later, at an Extraordinary General Meeting, the motion that the name Institute of Optometrists Queensland (Incorporated) be changed to Australian Optometrical Association, Queensland Division (Incorporated) was carried.

In 1965, a three year full time course was established at the Queensland Institute of Technology with Mr. Noel Verney as its head.

Fast forward to 1975…the Whitlam Labor government swept to power and introduced Medibank. Thanks to then Minister for Social Security and later Governor-General, the Hon. Bill Hayden AC (a Queenslander), optometry was included.

Medibank was restructured as Medicare in 1984 and optometry remained a part of it. Three years later, thanks to lobbying by Queensland and other state OAA divisions, optometrists were granted access to diagnostic drugs.

Following intense lobbying from Queensland and other state OAA divisions, the Federal Government reversed its decision to exclude optometry from Medicare in 1993.

It was almost a decade ago that all State Divisions of the Association changed their names from the Australian Optometrical Association to Optometrists Association Australia.

In 2000, the Northern Territory joined with the Queensland Division to become the OAA Qld/NT Division.

The year 2004 was an historic time for the QLD/NT Association with the start of the first Graduate Certificate in Ocular Therapeutics course at the Queensland University of Technology, with 40 post graduate students enrolled.

Another huge victory came the following year when the Queensland Health (Drugs and Poisons) Amendment Regulation came into effect and gave Queensland optometrists access to topical, ocular drugs including steroids and glaucoma medications. Legislation was approved in the Northern Territory in 2007 enabling optometrists to prescribe therapeutic drugs.

Following a threat by twenty-two public hospital ophthalmologists to abandon services at Queensland public hospitals, the Queensland Government introduced the Health (Drugs and Poisons) Amendment Regulation (no 2) 2005 on 14 July 2005 thus removing some steroids and glaucoma medications and the therapeutic role of the Optometrists Board of Queensland.

Looking into the future of optometry in her area, Ms. Pugh says: “At this time in 2008 we boast one of the world’s finest optometry schools, QUT’s School of Optometry in the Brisbane suburb of Kelvin Grove. This year students will sit their examinations after four years of undergraduate study in the BAppSc(Optom) degree. From next year, the degree will be a five-year course of study. It will be in two parts – a three-year undergraduate Bachelor of Vision Science followed by a two year Masters of Optometry. Therapeutics will be included as is the case with the existing five-year degrees at the University of New South Wales and University of Melbourne.

“On 1 August this year forty-five practising optometrists commenced study in QUT’s post graduate qualification, the Graduate Certificate in Ocular Therapeutics. On completion of the course they will be therapeutically endorsed by the optometrists boards of Queensland and the Northern Territory and be able to use and prescribe ocular therapeutics in practice. This will be the fourth such course of its kind. Currently there are over one hundred optometrists endorsed in both jurisdictions. It is inevitable that all Australian States and Territories will adopt a national ocular therapeutics list that includes glaucoma medications, possibly by Christmas this year.

Ms. Pugh believes however, “this is an area that the Division will need to monitor closely as other interests lobby governments. The move to “corporate optometry” has not adversely affected the integrity of the profession at this point and corporates have thus far maintained good clinical standards. It is critical that they continue to put standards above shareholder returns as experiences in other professions have not always gone that way.

“These are exciting times for optometry in both jurisdictions. Contemporary initiatives for the Division are mainly associated with government and include more comprehensive therapeutics lists, enhanced participation in the Pharmaceutical Benefits Scheme (PBS), reduction in public hospital ophthalmology lists, improvements in the Visiting Optometrists Scheme (VOS), falls prevention, diabetes and smoking cessation.”