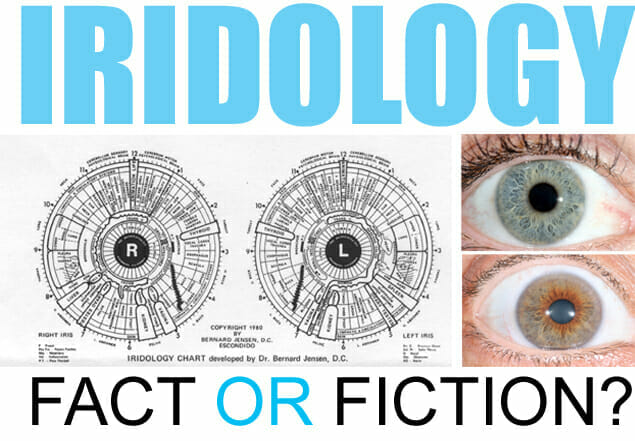 Iridology is considered a disproved alternative health practice by eyecare professionals, however as iridologists use the eye as a ‘health screening tool’, we examine the foundations of the practice and examination methods.

Internet reference tool, Wikipedia, defines iridology as “an alternative medicine technique whose proponents believe that patterns, colours, and other characteristics of the iris can be examined to determine information about a patient’s systematic health. Practitioners match their observations to iris charts which divide the iris into zones corresponding to specific parts of the human body. Iridologists see the eyes as ‘windows’ into the body’s state of health. “Iridologists use the charts to distinguish between healthy systems and organs in the body and those which are overactive, inflamed, or distressed. Iridologists believe this information may be used to demonstrate a patient’s susceptibility towards certain illnesses, to reflect past medical problems, or to predict later consequences of health problems which may be developing.

“As it is not a method of treatment, but a diagnostic tool, its practitioners often study other branches of alternative medicine, such as naturopathy.

“Iridology is not supported by any published studies and is considered pseudoscience to most medical practitioners.”1

“There are several studies examining iridology from different perspectives. The following studies have been published in peer-reviewed journals.”

However, when asked what the Australian Medical Association’s (AMA) position was on iridology, Dr. Maurice Rickard, Manager the Public Health Policy for the AMA simply replied: “I’m afraid the AMA doesn’t have a position on iridology.

” He then referred mivision to RANZCO, which would have the evidence-based clinical understanding we might be seeking.

The Royal Australian and New Zealand College of Ophthalmologists (RANZCO) does not recognise iridology as a science or diagnostic tool. A spokesman simply replied: “RANZCO’s position on iridology is that it has no basis in science and is a disproved alternative health care practice.

” That attitude does seem to be the general consensus of most medical and eye health professionals. When asked for its official line on iridology, the Optometrists Association of Australia (OAA) also said: “it had no policy on that”.

Sydney GP, Dr. Richard Gordon, is one of the mainstream medicos who remain sceptical. In fact, as past President of Skeptics NSW, Dr. Gordon has often commented and written on iridology and other forms of alternative medicine.

This is what he has to say:

“The theory is that – either by a process of creative design or evolutionary process, depending on a person’s religious beliefs – the human body is equipped with a metering device to gauge a person’s health. This device is the iris.

“Proponents claim that through the neuro-optic reflex – the neural connection of the iris with the cervical ganglion of the sympathetic nervous system – impressions are conveyed from all over the body to the iris, revealing pathological, structural and functional disturbances in the body.

“So, what is the evidence for iridology?

“The neuro-optic reflex is neither anatomical nor physiological, there being problems with the claimed representation of sides of the body and the ipsilateral iris, and the claims that the optic nerve is the final link in the feedback loop.

“The fact is that, except where damaged by trauma or surgery, the structure of the iris remains constant throughout life. This constancy of structure can be used like fingerprints for identification and has been suggested as a replacement for personal identification numbers.

“There are several studies examining iridology from different perspectives. The following studies have been published in peer-reviewed journals.

“In 1981, at the University of Melbourne, researchers compared iridology evaluations with known medical histories. Iridologists compared before-and-after iris photographs of subjects who developed an acute disease, and were asked to determine changes in the iris and to identify the organ affected.

“The iridologists only found changes in a set of photographs of the same subject taken two minutes apart as a control.

“The researchers concluded that “at least for the subjects of the prospective trial and for the acute stage of the disease states represented, there were no detectable iris changes of the type depicted in the commonly used iris diagnosis charts”.

“In 1979, at the University of California, U.S., researchers asked iridologists to compare iris photographs of 143 subjects (48 with renal disease) with creatinine levels for the detection of kidney dysfunction. The photographs were examined by three iridologists and three ophthalmologists. The overall hit rate for all six was no better than chance.

“Another study participant disputed the validity of serum creatinine as a test of renal function compared with iridology. He said iridology had been around for more than 125 years and creatinine testing was only recent. However, the age of a test does not add to its validity.

“In Complementary Therapies in Medicine – an international, peer-reviewed journal – a 1996 study by Buchanan examined the diagnosis of ulcerative colitis, asthma, coronary artery disease and psoriasis. The study concluded that ‘the diagnosis of these diseases cannot be aided by an iridological style analysis’.

“In 1985, in the Nordic ophthalmological journal Acta Ophthalmologica, Berggren concluded that: “Good care of patients is inconsistent with deceptive methods and iridology should be regarded as medical fraud.”2

There have been numerous other studies, such as the one in 1998, conducted by Eugene Emery, a science writer for the Providence Journal,l who tested the ability of two iridologists to assess his health and to match slides he had prepared of the eyes of eight people who had been medically diagnosed. Both iridologists scored very poorly.

In 2000, Dr. Edzard Ernst issued a thorough review of published reports up to that time. Noting that none of the ‘positive’ studies had been properly designed, he concluded:

“Might iridology be doing any harm? Waste of money and time are two obvious undesired effects. The possibility of false-positive diagnoses, i.e. diagnosing – and subsequently treating – conditions that did not exist in the first place, seems more serious.

“The real problem, however, might be false-negative diagnoses: someone may feel unwell, go to an iridologist, and be given a clean bill of health. Subsequently, this person could be found to have a serious disease. In such cases, valuable time for early treatment (and indeed lives) can be lost through the use of iridology.”3