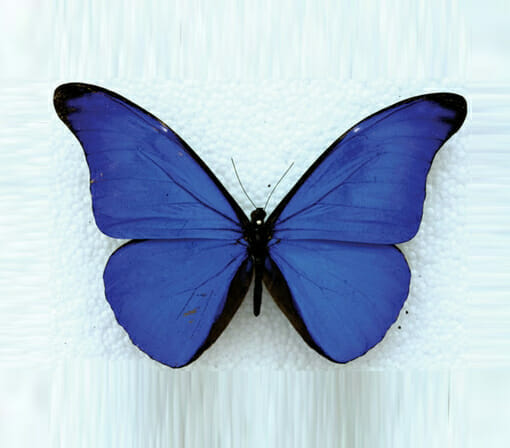 Bio-inspiration, the study of nature to inspire innovation, has lead to remarkable discoveries that have impacted everything from fabrics and cosmetics to building design, solar cells and x-ray technology. Even contact lenses could be said to be bio-inspired as the contact lens was designed to mimic the natural contour of the healthy eye.

One day, back in 1941, Swiss Engineer, George de Mestral conceived Velcro when he was out for a walk in the Alps with his dog. On his return, he noticed his dog’s fur had collected burdock plant seeds. On closer inspection, he discovered the seeds had many small hooks on the end of their protective spikes which had tightly bound themselves to the loops formed by the dog’s hair.

This simple observation led him to recognise that an artificial system comprising of hooks and loops could be fabricated to create the same effect – and used constructively in industry.

Swiss Engineer, George de Mestral conceived Velcro when he was out for a walk in the Alps with his dog…

There are many other forces of nature that have inspired the everyday including the lotus leaf, gecko and peacock feathers.

Floral systems have been a valuable source of innovation. One notable example is the leaf of the lotus plant, from the genus Nelumbo Nucifera. The Lotus leaf has a complex rough surface, which, coupled with a waxy chemical surface composition, repels water and facilitates a natural process of self cleaning. This property of superhydrophobicity – very high water repellence – is often referred to as the ‘Lotus Effect’.

Synthetic mimics of the mechanism responsible for this effect have found application in biomedicine, large-area glazing and architectural coatings.

A recent study of the way lizards’ feet adhere strongly to surfaces and release their adhesion in milliseconds, allowing them to run quickly and vertically, has led to the concept for a new synthetic adhesive tape. Gecko Tape is now in the early stages of development.

The study of nature, has lead to the realisation that biological systems have evolved advantageous ways to manipulate the propagation of light and colour.

Photonic systems manipulate light directly by coherent scattering. This allows some bands of wavelength to propagate through the system in question while preventing others. Those bands that are inhibited from propagating are reflected, creating or contributing to the system’s coloured appearance. Common examples of this are the blue feathers on a peacock, or the silver scales on some fish.

Some animal and plant species are more highly evolved to offer distinct selection advantages such as being able to avoid detection by predators or search for nourishment.

Take, for instance, the bright iridescent colour of Morpho butterflies. Several detailed investigations have revealed that their intense hues and remarkable conspicuousness is the result of a series of highly layered coherent scattering structures that cover the scales on wings. The nature of the layered structure and the ridging into which it is distributed, produces bright iridescence and enhances the creature’s visibility when viewed from an angle.

In some Morpho species, an additional layer of surface scales that covers those which brightly reflect blue wavelengths further enhances the angular visibility.

Significant efforts have been directed toward understanding the scale structure photonic protocols in Morpho and other butterflies. The results of some of these and other studies, have inspired and continue to inspire specific optical, photonic, biomedical, industrial and more general appearance-related applications.

Research into the Morpho butterfly inspired development of MorphoTex – a high-end fashion fabric which is designed and marketed by the Teijin Corporation of Japan. MorphoTex fibres comprise a particularly ingenious periodic variation in the refractive index of their interior, which in turn gives them an iridescent colour effect. When they are woven together, this structural colour dominates the appearance of the fabric and offers an additional self-cleaning property modelled on the lotus leaf effect.

The design of cosmetics has taken similar inspiration from Morpho and other butterflies. L’Oreal, in particular, has led bio-optics inspiration in the cosmetics industry by mimicking the way in which light and colour are manipulated in Morpho butterfly scales and other structurally coloured natural systems.

Studies of ultra-black wing-scale regions in Lepidoptera, a large order of insects that includes moths and butterflies, revealed the importance of a photonic component that enhances absorption of incident light and creates a deep black appearance. This discovery is inspiring the development of high efficiency photovoltaic cells for the energy industry.

A study of the brilliant whiteness from ultrathin beetle scales has offered important insight to the understanding of how white surfaces may be made very thin while still achieving their diffuse broadband and high intensity scattering character.

The photonics-based study of the Cyphochilus beetle has inspired the development of optimisation principles for the industrial processes involved in the manufacture of white paper, amongst other objects and systems that require a white appearance.

Researchers have discovered that while the optical features of many animal species are often conspicuous to human vision, some features can not be seen by the naked eye. As an example, the wings of the Papilio butterfly are green to human vision, but its wing scales comprise micron-sized regions of juxtaposed yellow and blue colour centres.

This has led directly to associated bio-inspiration in anti-counterfeiting applications. By recreating the photonic nanostructure responsible for the visual appearance of the Papilio butterfly, we can create a visually clandestine communication channel that will be invaluable for currency-related applications.

So how is bio-inspiration being applied to the world of eye care?

Animal visual systems can be just as highly adapted and precisely functional as the systems which dictate their appearances. They have similarly been the subject of a wide range of detailed investigations that have offered equivalent inspiration for scientific and commercial applications.

An outstanding example of this is research into the lobster. Lobsters’ eyes comprise arrays of channels arranged in such a way that light from a wide range of angles is focussed onto specific receptor regions. This enables their eyes to collect photons from an extremely wide range of angles and in doing so, to see most of the hemisphere above it.

The lobster’s incredible vision has inspired X-ray astronomers to design and develop a comparable device hat captures x-ray astronomical information from up to 1000 square degrees of space at once – rather than from just a few square degrees as was previously achievable.

Scientists have discovered that insect eyes have a distinct surface nanostructural feature that improves the transparency of the eye by significantly reducing the intensity of light that it reflects. This optimises the eyes’ overall optical collection efficiency. The research has inspired engineers of the protective coverings on solar cells and architects designing buildings that incorporate large glazed openings for maximum lighting function.

Scientists are now studying the physiology of the human eye and observing evolution’s processes in an effort to develop products that are more in tune with the eye and the visual system. This is good news for the industry because optical researchers believe that patients will feel more confident about using bio-inspired lens care products based on research that is more compatible with the eye.

As we sit on the cusp of exciting new bio-inspired discoveries, we look forward to benefiting from nature’s profound influence over millions of years, on the technology and procedures surrounding eye care.