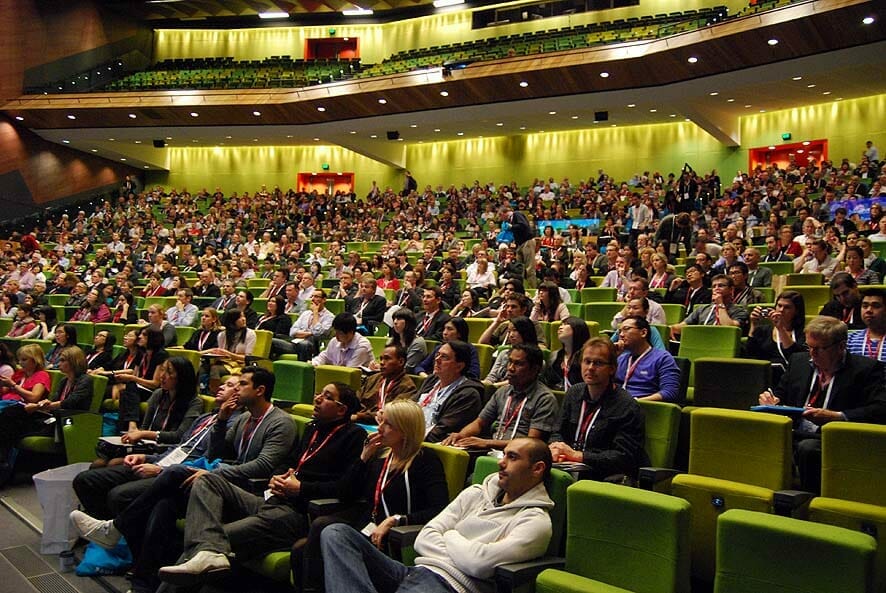 Victoria’s 2011 Southern Regional Congress (SRC) has been and gone, but this year, as a result of enforced CPD requirements, there’s no doubt that key learning points were well heard and retained.

There were over 1,300 delegates in attendance at SRC, held in the Melbourne Exhibition and Conference Centre alongside the Yarra River, over a typically fresh, long winter’s weekend in May. Delegates came from around the world and every state of Australia.

Terri Smith, CEO, Optometrists Association of Australia, Victoria branch, said attendance “was up 30 per cent up on last year’s numbers” fuelled, in the main, by the Optometry Board of Australia’s new requirements to achieve 40 Continuing Professional Development (CPD) points every year.

By attending sessions over all three days of the conference, delegates could achieve an entire year’s worth of CPD points. While this has been possible in previous years, a new interactive keypad system ensured that to receive all their CPD points for a session, delegates needed to not only attend sessions, but pay attention too. “A couple of people had concerns (about the system) because it was new… but the delegates have been terrific… they’ve received it really well and most of them have taken the option of doing the assessment after the sessions,” said Ms. Smith.

In fact, the assessment questions at the end of each session stimulated lively conversation among delegates as they discussed the key learning points, the most likely answers to the questions asked, and responded to official results once they were displayed on screen.

All of the optometrists mivision spoke with were positive about the assessment and attendance process and the emphasis it placed on professional development. “If an optometrist isn’t interested in attending the sessions and isn’t interested in furthering their professional education, then I wouldn’t want to be a patient in their practice,” said one.

Another commented that the enforcement of CPD requirements has brought the Australian profession more into line with the American stance on professional development, but there is still further to go. “At courses I attended when I practised in America, you didn’t get points if you arrived at a session more than five minutes late or left more that five minutes early,” said one Victorian optometrist. “It makes sense, we need professional development.”

“We’ve got a big enough group now to offer the choice… so we were able to develop a business focussed session with ODMA which was great to be able to do. And there were the usual clinical sessions
to choose from as well.” said Ms. Smith.

Keynote Speakers
International keynote speakers at this year’s SRC included U.S. based Professor Bruce Onofrey, a recognised specialist on the management of ocular disease and the use of pharmaceutical agents; and Associate Professor Diana Shechtman, the attending optometric physician at the Eye Institute and Diabetic Macular Clinic of Nova Southeastern University College of Optometry. While Prof. Onofrey spoke on the visually confronting topic of ocular bumps and lumps, Prof. Shechtman delivered a practical keynote on the impact of diet on macular degeneration.

Speaking of Prof. Shechtman’s presentation, Melbourne based optometrist, Laura Downie commented: “The presentation was really useful – the sort of information that can be picked up and used in practise immediately”.

Dr. Alex Gentle, a senior lecturer at the Department of Optometry and Vision Sciences at the University of Melbourne delivered a presentation on myopia control and Daryl Guest, an optometrist who practices in Tasmania spoke about systematic diagnosis by exclusion, rather than ‘bobbing for apples’.

While all keynote speakers presented workshops across the weekend, a Johnson and Johnson breakfast on Monday morning proved particularly interesting. Dr. Alex Gentle and Daryl Guest sparred over the diagnosis and treatment of ocular viral conditions and even broached the somewhat sensitive topic of dealing with patients suspected of carrying sexually transmitted diseases.

Other workshops delivered across the weekend included the complex topic of patient co-management, women’s eye health, the latest in vision research, including solutions for safe contact lens storage, diet, the use of steroids and antibiotics.

The conference closed with the presentation of the H Barry Collin Public Research Medal Lecture, delivered by Professor Jack Pettigrew. Prof. Pettigrew’s lecture, which was entitled ‘Exploring the visual systems of monks and extinct Bradshaw rock artists’ proved that vision science is not just the dry stuff of physics and optics, but rather, a vibrant field of life science, from which we can all learn about the natural world, as well as our own nature.

Social Networking
Of course an event like SRC is never only about learning… there’s a fair amount of social networking and partying that goes on too. And this year was like no other.

700 people gathered in the Banquet Room of the Melbourne Conference Centre to attend the SRC dinner on Saturday evening, which was hosted by Transitions. In a room wafting with dry ice and low light, guests were entertained by Mr. Percival who crafted his own music using electronic keyboards, his body, his voice, the voice of Transitions CEO Eric Breda and the audience. Later, a DJ had most in the room up and dancing until the evening’s close.

SRC Trade Expo Cocktails the following evening provided delegates and exhibitors with yet another opportunity to mingle and network in a relaxed environment, away from lectures and exhibition stands. SRC 2012 will be held in Melbourne from 19 – 21 May.