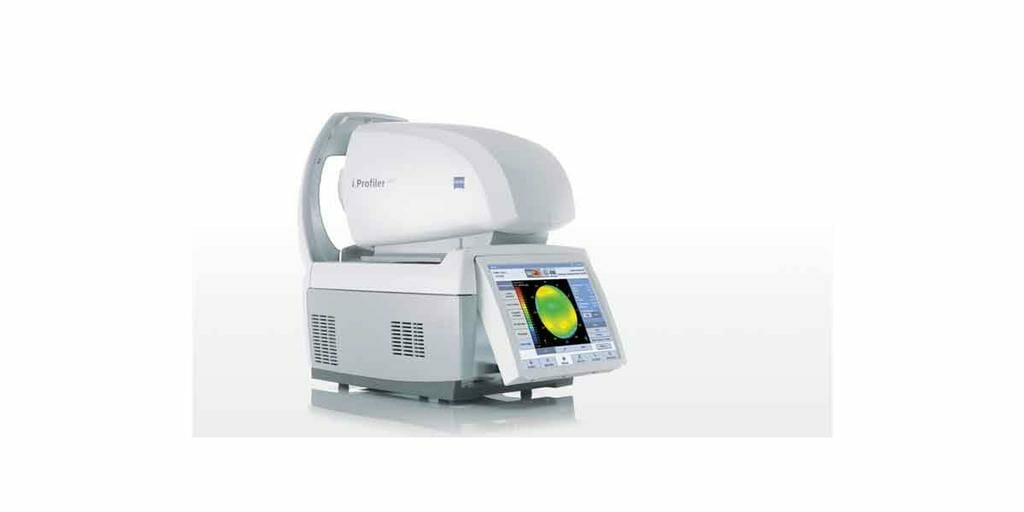 By taking into consideration higher order aberrations when prescribing spectacle correction, wavefront aberrometry can lead to improved vision correction that delivers optimum visual performance across a broad range of light conditions, including challenging viewing conditions such as night driving.

This is the idea behind the new i.Profiler Plus.

The i.Profiler Plus combines subjective refraction and wavefront-guided analysis with proprietary software to produce an optimised spectacle correction called i.Scription, that takes into consideration both lower-order and higher-order aberrations that are unique to each eye.

The wavefront refraction is blended with the subjective refraction in order to produce the final i.Scription result…

What is Wavefront Analysis?

Wavefront analysis first appeared in the realm of astronomy to compensate for distortions produced by the earth’s atmosphere in telescopic images. A star can be considered a point light source at infinity and with ideal conditions, it would appear as a single point of light through telescope optics. However in practice, light rays are distorted as they pass through the earth’s atmosphere creating blurry images.

To correct for this, the Hartmann-Shack principle compensates the distortions with a series of deformable mirrors within the telescope.

The i.Profilerplus also uses the Hartman-Shack principle to compensate for imperfections – in this case from the cornea and the lens instead of the earth’s atmosphere. And instead of a star, the i.Profilerplus projects a point of light onto the retina which reflects back into the device through an array of tiny lenslets and onto a CCD sensor, thereby sampling the optics of the eye over the entire pupil aperture.

A perfect optical system would produce a plane (flat) wavefront on the sensor, however any differences between the ideal wavefront and the actual wavefront will cause light to deviate as it passes through the lenslets. This displacement of each ray of light is measured and used to create the wavefront pattern of the measured eye. It can thus quantify both the lower-order aberrations (that is those that can be corrected by traditional spherical and cylindrical lenses) as well as higher-order aberrations (more complex aberrations that cannot be corrected by traditional sphere and cylinder).

Subjective refraction has been the mainstay of spectacle prescription for many years – in fact, the technique has not changed much over the last century, and for good reason. In most cases, a subjective refraction in the hands of a highly-skilled clinician yields good levels of daylight vision.

Firstly, with the pupil at a relatively small size, the eye’s depth of focus is greater, therefore making it less sensitive to subtle improvements of vision correction which could be otherwise achieved during the refraction.

But more importantly, as pupil size increases, marginal rays of light enter the eye rather than just paraxial rays. The consequence of this is an increased blur due to higher order aberrations which tend to be affected more by marginal light rays than by paraxial ones.

Therefore, the ideal prescription often varies under photopic (daytime), mesopic (twilight) and scotopic (night time) conditions. This shift between photopic and scotopic conditions is often described as “night myopia” and can be troublesome for patients.

This is where the i.Profilerplus and its wavefront analysis comes into the equation. Once the wavefront errors have been recorded, the higher-order and lower-order aberrations are established and a customised spectacle correction can be determined.

Personalised higher-order aberration correction cannot be ground into spectacle lenses because the eye is constantly moving and looking through a different point of the lens at any moment, making such an idea impractical. So how can wavefront analysis be of use?

Wavefront analysis becomes important due to the fact that higher order aberrations may produce more than one combination of cylinder power and axis, which yields improved quality of vision. Although the Jackson cross-cylinder technique will be able to find one of these local maxima, it may not necessarily produce the best quality of vision, or global maximum.

So instead of simply using spherical and cylindrical lenses to eliminate lower order aberrations at one of these local maxima as found by the Jackson cross-cylinder, the i.Profilerplus uses wavefront-guided vision correction to select a single correction that minimises the blur that results from the interaction between lower-order and higher-order aberrations, still using a traditional sphero-cylinder combination. This is the essence of the i.Scription prescription.

In practical terms, this technique optimises overall vision, but most importantly, improves low-light vision as higher-order aberrations come into play.

Finally, the i.Scription result is used to produce a ZEISS free form lens design, which can be calculated in “real time” and targeted to 1/100th of a dioptre using the wearer’s specific prescription and fitting parameters, immediately prior to fabrication. Therefore, progressive and single vision lens designs with i.Scription by ZEISS can be fully customised to the unique visual requirements of the individual wearer who will then benefit from optimised vision across all light levels.

Initial results using this unique approach are encouraging. The i.ProfilerPlus was first launched in Europe where there are now over 250,000 i.Scription wearers. In a survey conducted by an independent optician in Germany, 74 per cent of patients wearing i.Scription lenses reported an improvement in night vision.Additionally, about two thirds of patients reported seeing colours more intensely and about 80 per cent reported that they enjoyed greater visual comfort.

In summary, the i.Profilerplus aims to supplement the traditional subjective refraction by using wavefront analysis in combination with proprietary software to produce the most balanced and precise correction possible. The resulting i.Scription is used to produce personalised free-form ZEISS lenses, optimised to give maximum benefit to the patient in all lighting conditions.

Matthew Wensor is the Product Manager Ophthalmic Systems with the Carl Zeiss Medical Group. He has worked with the company since 1997, initially in sales and then as Education and Clinical Support Manager.