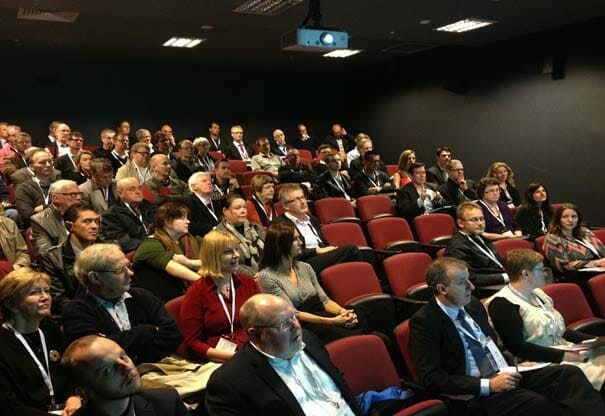 The rather quirkily named Tasmania’s Lifestyle Congress (TLC) is now in its ninth year and has grown from a small seminar following the Optometrists Association’s AGM to a three day conference incorporating a specialist low vision seminar with top quality local and international speakers.

The name TLC was originally chosen by the Division’s first Executive Director, Keith Mackriell, because the conference was designed to reflect the Tasmanian lifestyle – laid-back, small scale, intimate, quirky, and unique. Keith’s contribution to the Association, and his efforts to develop TLC prompted the Tasmanian Division Board to name the keynote lecture after him.

This year, the annual Keith Mackriell Lecture, delivered by Queensland optometrist David Foresto, was entitled “Autoimmune Disease and the Eye”.

David was, as usual, an extremely entertaining and engaging speaker, and his presentation made the clear point that autoimmune diseases are extremely relevant to the optometrists in private practice, and that, not only do we need to know about our patients’ autoimmune history, but that the medications used to treat these conditions can be as big a problem as the disease itself. David touched on rheumatoid arthritis, Type 1 Diabetes, Sarcoidosis and Graves Disease, with the common theme being, of course, inflammation.

As is customary at TLC, Keith Mackriell himself was present to congratulate David on his talk, and present a small token of appreciation. However, this was not the last time the former ABC journalist and OAA CEO would be featured at TLC IX.

Although the Mackriell Lecture took place on the Saturday morning, this year for extremely unique reasons, TLC started on the Friday afternoon. 2013 sees the centenary of regulated optometry in Tasmania, and indeed in the entire British Commonwealth. Exactly 100 years ago, the Tasmanian Parliament passed the Opticians Act 1913, the first in the empire, and optometry became a profession.

To recognise this occasion, the conference was granted a Vice-Regal opening, with His Excellency, the Honourable Chief Justice Alan Blow, Lieutenant Governor of Tasmania opening proceedings and delivering the commencement speech. Following this, local Tasmanian optometrist Leah McClintoch delivered a talk on behalf of our official charity, Optometry Giving Sight. Leah personally help set up an eye care and teaching program in Bangladesh, and her insights into the challenges faced in this part of
the world are fascinating.

Friday afternoon’s highlights were without doubt the presentations by the keynote overseas speakers, Professor Joe Sowka and Dr. Lori Vollmer, from Nova Southeastern University in Florida. This is the third time that this entertaining husband and wife team has spoken at TLC, and once again, they did not disappoint. Professor Sowka’s first talk was on the diagnosis and management of neuro-ophthalmic emergencies, where he used numerous case reports to demonstrate how third cranial nerve palsies can be the earliest sign of a life-threatening neurological condition. Dr. Vollmer’s initial presentation was on the management of conjunctival malignancies, where she discussed such conditions as ocular lymphoma, sessile papilloma and ocular surface squamous neoplasia.

Rounding out the early start to day one was local Tasmanian ophthalmologist Dr. Guy Bylsma, who presented a series of extremely entertaining and interesting glaucoma case reports, and New Zealand optometrist and contact lens expert, Adele Jefferies, who spoke on lens care products and the somewhat controversial issues of SICS and PATH. All in all, a great day, but there was still more to come…

In recognition of the centenary event, all TLC delegates were invited to a Vice Regal reception at Government House. Two buses were organised to transfer delegates directly from the Congress venue to Government House, which is built overlooking the city and the Derwent River. Delegates enjoyed spectacular views, Tasmanian food and drink, and were once again welcomed with a short speech by the Lieutenant Governor.

A key part of TLC has always been the European Eyewear Australian Low Vision Seminar. Held on Saturday morning, this year the keynote speaker was Professor Jonathan Jackson, the Head of Clinical Services at the Australian College of Optometry. Professor Jackson, along with local low vision practitioner Paul Graveson, and the inimitable Graham Sheil, presented just over three hours of practical low vision education, directed at the experienced and novice practitioner alike. The highlights were Professor Jackson’s pediatric low vision lecture, and Paul Graveson’s talk on using iPads and iPhones to help patients with low vision.

Saturday afternoon’s session was shorter this year. David Foresto led off with the aforementioned Keith Mackriell lecture and Joe Sowka returned with an extremely interesting presentation on using OCT to aid clinical therapeutic decisions. His talk included anterior segment, optic nerve
and retinal imaging, and would have
no doubt impressed the army of suppliers in the trade display with OCT machines on display.

Dinner and Book Launch at MONA

The reason for the early finish to day two was so delegates could enjoy a cruise up the River Derwent to the Museum of Old and New Art, the world renowned MONA. It is hard to describe this private museum owned by Tasmanian millionaire David Walsh, except to just say ‘wow’. Built into the side of a cliff overlooking the river, MONA is part-Batcave and part-museum, housing no small amount of controversial and confronting works.

The museum visit was followed by the conference dinner at MONA, the highlight of which was the launch of Keith Mackriell’s book, Towards the Vision Splendid – The History of Optometry in Tasmania. I was given the job of interviewing Keith, which, as a fellow ABC broadcaster, was a pleasure in itself. His insights into the early days of the profession in Tasmania, and the amazing achievements of Tasmanian optometrists, were fascinating.

Day three began with the Cornea and Contact Lens Society breakfast, which brought back Jonathan Jackson to talk about the role that contact lenses have in the prevention of avoidable blindness. Joe Sowka and Lori Vollmer contributed three more lectures, covering glaucoma and anterior segment emergencies. Joe’s final lecture on making the correct therapeutic choices in angles closure glaucoma was particularly well received.

On Sunday afternoon we were treated to the return of Australian cataract specialist Dr. Fabian Burgess to TLC. Dr. Burgess, who runs cataract clinics in both Hobart and Melbourne, is an extremely popular speaker, and once again did not disappoint. His presentation on the therapeutic decisions surrounding cataract surgery centred on the ‘hot topic’ of the moment – femtosecond laser assisted cataract surgery. Queensland optometrist and regular presenter Jason Holland spoke on contact lens surface issues, and David Foresto returned to talk about ocular allergies.

All in all, TLC 2013 was a great success. Special mention should be made of the many suppliers who made the trip across Bass Strait to take part in the Trade Display. The small scale of TLC gives suppliers terrific access to delegates, and makes the TLC Trade Display one of the best opportunities in the country for optometrists to try out big ticket items like OCTs and retinal cameras. The small scale and unique location make TLC, in my opinion, one of the most enjoyable conferences in the country. Although I may be a bit biased…

Andrew Hogan BScOptom (Melb) PGCOT FACO, is an ABC broadcaster practising optometrist in Hobart where he works in the areas of children’s vision, contact lenses and sports optometry.