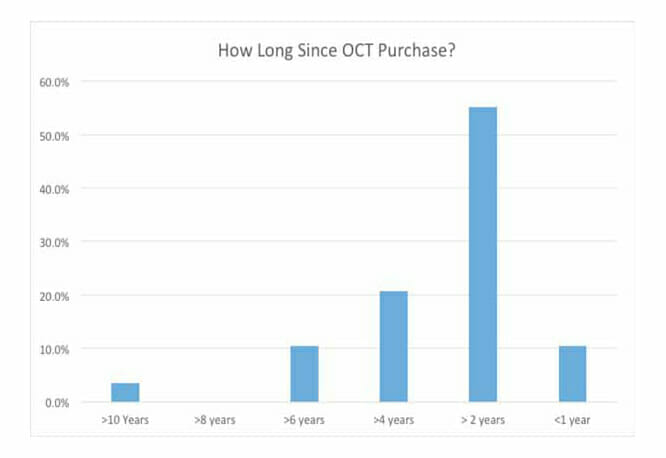 Results from a recent Australian survey has identified that patient care might be improved – simply because optometrists are not taking the opportunity to get the most from their OCT.

The way an eye health professional uses technology is not necessarily the way it was designed to be used. Eye health industry consultancy Ideology, in conjunction with Eyecare Plus, recently surveyed 200 Australian optometry practices to determine how they currently use Optical Coherence Tomography (OCTs).

The survey delved into both the clinical use of the device as well as some of the commercial and operational aspects of its use.

The results clearly identify significant opportunities for both patients and practices to benefit more from this technology.

Given that 100 per cent of respondents said that they had found pathology they would have missed using other diagnostic methods, this would incline us towards a more liberal use of the OCT rather than a restrictive application… 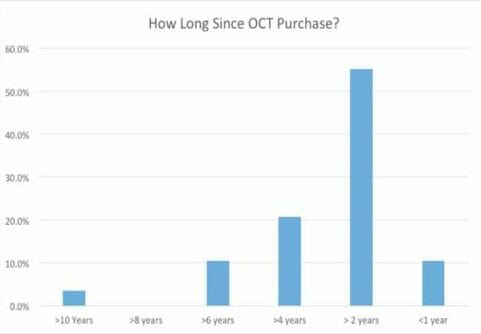 The overall average price paid for an OCT was AU$81,600, although this was found to have varied considerably depending on the model and when it was purchased (Table 2). 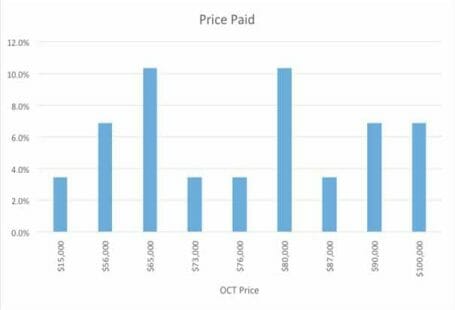 Although OCTs have shown a trend towards becoming cheaper, local pricing has been heavily influenced by international currency exchanges. This technology is also developing rapidly with newer features in upgraded machines coming online that have tended to keep the prices of the latest equipment higher.

Ninety three per cent of optometrists who responded to the survey said they were happy with the OCT they had purchased. One optometrist, Victorian Ed Kosmac, commented, “The last time I felt passionate about digital technology was when I discovered the iPod. In much the same way I have become attached to the possibilities offered by the modern OCT instrument.”

Respondents to the survey replied that the Topcon 3D OCT was the most popular choice at 41 per cent, with the Carl Zeiss Cirrus and Stratus models combined making up 28 per cent (Table 3). The combined OCT/DRI functions appear to have great appeal, although the recently released Cirrus 5000 also has two DRI options which may change this result. 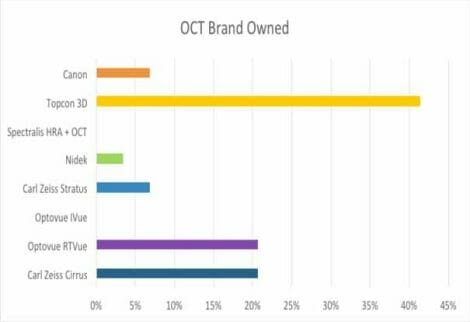 Clinical Indications For OCT Use

The study revealed a range of perspectives regarding the clinical indications for OCT. The large majority of optometrists in the survey indicated they were being conservative and selective with the application of the device in their practices (Table 4). Those who replied “Other” said the following:

“We would like to offer to everyone, but currently patients with clear risk or identified eye disease.”

“Any suspect or identified pathological patient.”

“It varies depending on optometrist and discussion with patient.”

Eighty per cent of respondents said they scanned just 15 per cent or less of their patients who presented for eye examinations (Table 5).

This low number of scans is significant. There are no legal or professional restrictions relating to the use of OCT. There are no health or risk issues that would limit who might be able to have an OCT scan. Neither are there any defined limits on OCT use by third party organisations. Use of the OCT, therefore, must be simply a matter of clinical judgement or economic concern for the patient.

For those optometrists that scanned patients over a specific age the following ages were used as an indicator for OCT scan eligibility (Table 6). 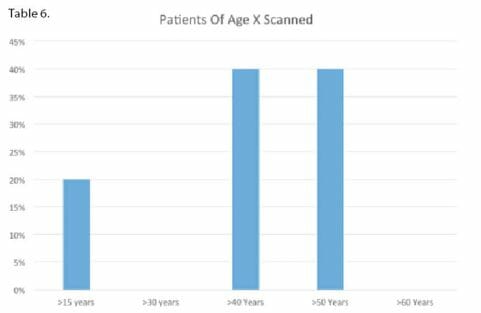 To consider these results properly we need to be clear about the nature of the patient and community base that represents the market for OCT scans.

The following demographic information provides context when considering these responses. Bear in mind that the data relates to optometry practices where almost everyone has an eye problem and the sample of the community is biased. The following facts, for the most part, relate to the general population:

The basic age demographics when compared to the survey responses would indicate that even though there is an intention to provide OCT scanning for patients over the ages of 40 and 50, this is only partially realised in practice.

For those practices taking a more specific approach to selecting patients for OCT scans on the basis of disease risk, the provided responses would lead us to conclude that many patients who are at risk actually do not get OCT scans, even though it is the practice’s intention to provide this service. Logically then, as this criteria is applied as a matter of clinical judgement, a failure to scan a patient with potential risk of disease is a failure of clinical practice.

When asked whether optometrists believed they had identified pathology with the OCT that they would have missed using traditional methods, 100 per cent of respondents said yes.

In considering the OCT as a device, this would naturally be a result of the advance in technology. The OCT is a diagnostic device of greater capability than any of the older examination methods. If 100 per cent of optometrists find disease or eye health problems they could not identify using other techniques, the same must be true to some extent in untested patients attending the practice, particularly given that there are patients in risk categories that go un-tested. The practitioner can never truly know if they have missed something unless they do an OCT scan.

OCT as a Monitoring Tool

If the OCT is a baseline reference, we must by definition, scan those without identified eye disease, and those outside of the normal risk categories. If we wait until they are in a risk category they may have already started to develop eye disease.

The study found that in just over half of all practices surveyed, the optometrist completes the scans and in all but a few other practices the optical assistant performed the scans. A further study would be of interest to determine whether the outcomes differ among various OCT operators. It is fair to say that the differences, if any, would come down to knowledge and training, rather than job title. This is a very important area to consider. The consequences of an inadequate scan could be significant for the patient and the practice (Table 7 and 8) 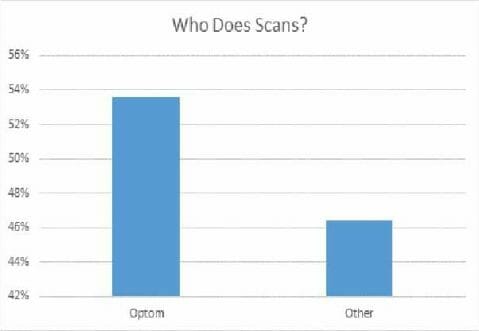 Although more than half the practices surveyed said they scanned patients prior to their eye test, the tables compiled as a result of the study results presents a slight contradiction (Tables 9 and 10). 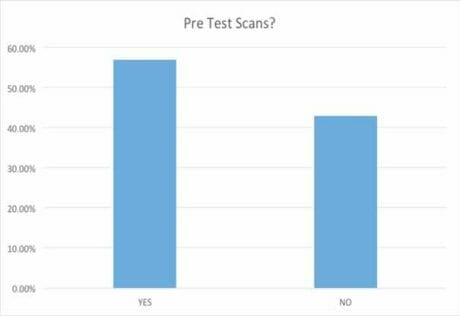 The decision about when to scan a patient, in terms of timing, is determined by the practitioner’s view of:

What are the Normal Fees Charged? Fees are always a subject of discussion. To decide on an appropriate fee, the best information comes from performing a cost-volume-profit analysis. By identifying the anticipated number of patients and factoring in the equipment and practice overhead costs you can determine the level of fees required to either cover costs or make a profit.

For example, if your OCT costs around $100,000 paid over five years, and you scan 400 patients a year, a fee of around $75 will cover all of your costs (including practice overheads). Price is also a marketing decision. If you are of a mind to make a profit from the OCT the question then becomes, “What will my patients be prepared to pay for this service?”

The patient’s perception of value is an important consideration when setting fees. Making the benefits of OCT as tangible as possible can help reinforce the delivery of health care. All practices explained the OCT results to their patients but less than 50 per cent actually provided patients with some sort of report about the scan (Table 12). 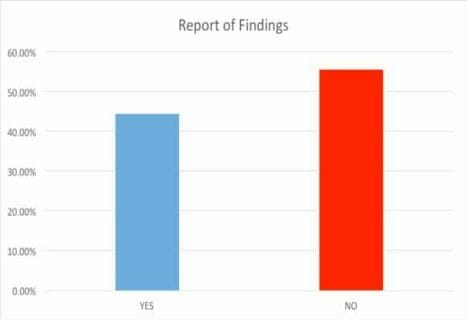 This study, though brief, highlighted important considerations and opportunities that could help optometrists maximise the value of OCT – both for the benefit of patients’ eye health and practice profitability.

If we accept the proposition that everyone over the age of 50 years either needs a baseline-of-reference scan, or is at risk of eye disease and therefore could benefit from a scan, we would find that at least 50 per cent of our patients should have an OCT scan provided they do not refuse.

Given that 100 per cent of respondents said that they had found pathology they would have missed using other diagnostic methods, this would incline us towards a more liberal use of the OCT rather than a restrictive application. Macular degeneration and a number of other pathologies can occur at young ages.
This may be uncommon, but who would want to take the chance of missing it in an eye test?

One hundred per cent of respondents thought OCT was a useful baseline reference but the OCT in most practices is not being optimally used as a monitoring tool for those patients who would benefit from this use.

From this sample of responses, it is clear that on a number of levels, we could develop a very good argument to say that every patient should have an OCT scan.