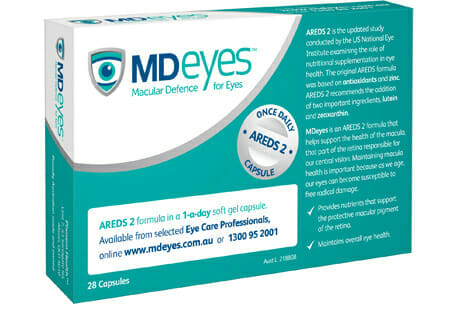 A new once daily AREDS 2 supplement, made in Australia and containing the precise ingredients and total daily amounts studied in the Age-Related Eye Disease Study (AREDS) 2, is now available exclusively for re-sale by eye care professionals.

MDeyes was launched at Australian Vision Conference (AVC) in Queensland, almost a year after the Age-Related Eye Disease Study (AREDS) 2, conducted by the National Eye Institute in the U.S., published its findings about supplementation for reducing the risk of progression to advanced AMD.

“I think a big part of the excitement has been around the fact that we’re Australia’s first complete AREDS 2 formula. MDeyes contains the precise ingredients and total daily amounts studied in the AREDS 2 low zinc formula, and we’re delivering it in a once daily capsule,” said Mr Spork. “Many of the delegates made the comment ‘I’ve been waiting for this’ – which is certainly good to hear. And people were also pleased to hear that MDeyes is Australian made and owned, and exclusive to eye care professionals. It isn’t sold through pharmacy.”

The original AREDS formula with 80 mg of zinc cannot be registered in Australia due to regulatory restrictions around high dose zinc (the TGA maximum zinc limit for listed medicines is 50 mg per day). While some brands are ‘AREDS 2-based’, they tend to contain only half the daily dose studied in AREDS 2 and are registered and labelled as “one a day.”

“The fact that AREDS 2 results reported in JAMA stated ‘there was no apparent effect of beta carotene elimination or lower-dose zinc on progression’ is particularly important in the Australian context. We’ve been careful to formulate MDeyes following the AREDS 2 results and we feature the same ingredients FloraGLO Lutein and Optisharp Zeaxanthin used in the AREDS 2 trials,” said Mr Spork. He added that the low zinc AREDS 2 formula delivered in MDeyes is well accepted in the UK, which has a similar regulatory environment to Australia.

Support for AREDS 2 supplements with reduced zinc dosage was voiced by many leading experts in the UK following the JAMA report last year. In Optician Online (May 2013), City University’s Professor John Lawrenson (co-author of the 2012 Cochrane review ‘Antioxidant vitamin & mineral supplements for slowing the progression of AMD’) and others advocated revising the AREDS formula by lowering zinc in addition to replacing β-carotene with Lutein + Zeaxanthin.

Design registration is pending on MDeyes’ packaging, which includes blister foils printed with the days of the week, and a grid printed on the back of each pack.

For more information go to www.mdeyes.com.au