Connect with:
HomemicontactHouston, We Have a Problem
micontact
author: mivision

Houston, We Have a Problem

Having undergone a vitrectomy, followed by a revision procedure, Professor Nathan Efron thought his right eye was on the way to recovery… yet somehow the world still didn’t look very clear.

As soon as I arrived home after my right eye vitrectomy I began posturing, which means looking down towards the floor. The theory is that the air bubble inside my eye will rise up and act as a tamponade; that is, exerting pressure against the back of my eye to keep my retina securely in place and minimise the risk of any post-operative detachment. I was required to ‘posture’ for 30 minutes every hour, and this was to continue for the next three days.

Just before retiring to bed that night, I removed the protective plastic shield and soft gauze eye pad, to reveal a very nasty looking eye. My upper eyelid was grossly swollen and distorted and my conjunctiva was very red and also swollen (grade 4 on the Efron scale). I reattached the plastic protective shield and laid
down with my left cheek against the pillow, as instructed. I tried to get to sleep… without success.

When discharged from the day surgery following my vitrectomy, I had been given numerous medications, including 500mg paracetamol/codeine tablets to be used to alleviate any post-surgical pain. Now I have never been one for taking sedatives or analgesics, but my eye was becoming very uncomfortable and it was keeping me awake. So I took two of these tablets, and they knocked me right out. I slept soundly for the rest of the night.

I started to feel a little faint, and developed a sickly feeling in the pit of my stomach.

I awoke the following morning (it was Saturday) to a beautiful sunny day. I couldn’t see anything out of my right eye – not that I had expected to see much because I had a huge air bubble in my eye – but I wasn’t expecting the dull orange-brown haze. I proceeded to insert my prescribed eye drops, and when I tilted my head right back to do this, I noticed something that scared the daylights out
of me… ink in the sky!

As I looked up at the ceiling, I could see three or four parallel lines of what looked like black ink dribbling in from the superior periphery towards my central point of fixation. I had an immediate sense of déjà vu… this was very similar to the ‘ink in the sky’ episode I experienced a couple of years earlier, when I had my initial retinal tears.

I started to feel a little faint, and developed a sickly feeling in the pit of my stomach.
I blurted out to Suzanne that something was amiss, and explained what I was seeing. Suzanne also felt faint, and had to sit down. We quickly realised that there must be bleeding inside my eye, and that this should not be happening. Silence followed. What to do next?

I called the emergency phone number for the clinic, which I had been given when discharged. There was no answer, so I left a recorded message. About an hour later Mike returned my call, and after a brief discussion, asked me to come straight in to the clinic. He said he would call Bill to see if he could come in to the clinic also. Suzanne drove me there, and Mike arrived at about the same time. He led me to the consulting room and proceeded to examine my eye, which was nicely dilated because I had already instilled 2 per cent homatropine as part of my post-operative medication protocol.

Both Mike and Bill examined my eye and declared that they really couldn’t see my fundus through the thick haze. Slit lamp examination revealed the presence of a 1 mm hyphaema, and red blood cells could be seen floating around in the anterior chamber. This confirmed my initial self-diagnosis that there had been bleeding inside my eye. Bill advised that there was a possibility that this would clear spontaneously, which was comforting. Mike was concerned about the level of swelling of my eyelid, and suggested I may have had an adverse reaction to Chlorsig. As a precaution he prescribed the use of Tobrex instead. I was advised to come in again two days later for a recheck.

When Mike examined me on the Monday, he reported he still could not see my fundus, which was consistent with the thick orange-brown haze I was observing. Vision was recorded as ‘light perception only’.
My intraocular pressure (IOP) had dropped to 2 mmHg, so Mike advised that I stop taking Azopt, and increase the frequency of pred forte to six times per day.

Two days later, my IOP was 3 mmHg (measured by Suzanne), but the following day, when I saw Mike again, it had shot up to 15 mmHg. I recommenced Azopt. After a further two days, my IOP was 13 mmHg, and remained at that level thereafter. The hyphaema had cleared and Mike advised me to revert back to instilling pred forte four times per day.

Bill’s main concern was not the drop in IOP or lack of vision, but the question of whether my retina was still attached. To check this, he performed a B-scan ultrasound examination, which confirmed that all was fine in this regard (Figure 1). 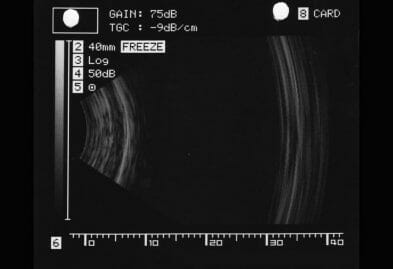 Bill sent me off to get my bloods taken for a thorough assessment of my blood clotting capability. At that time – and still today – I wasn’t taking aspirin or any blood thinners. I had stopped taking aspirin two years prior in view of emerging evidence – related to me by my endocrinologist – suggesting an absence of a proven benefit of regular aspirin. Blood tests revealed no abnormalities in respect of blood clotting.

Nine days after my vitrectomy, I was still only seeing a murky orange-brown haze, and vision was recorded as ‘hand movements’. Bill advised that a revision procedure was indicated, which would involve draining the bloodied fluid out of my eye and reinserting another air bubble. I was to come back in two days for this procedure.

As the saying goes, Bill was ‘beside himself’. “Of all people, why did this have to happen to you, Nathan?” he asked rhetorically. He was to repeat this sentiment, relating to my post-vitrectory bleed, a number of times over the next few months.

I had a different anaesthetist for the revision surgery, and found myself under a lighter sedation, but still comfortable and pain-free during the operation. Following the procedure, Bill told me he had identified the source of the bleeding. There was a small blood clot at the location of one of the original access ports, which was probably nicked when withdrawing the operating instruments. Apparently this can occur in up to 10 per cent of vitrectomy procedures. Bill told me that after flushing out my eye, he decided to again reinsert an air bubble, rather than silicone oil. He also lasered the new port sites to prevent further bleeding. His final comment to me, as I was wheeled out of the surgery, was “Let’s hope lightning doesn’t strike twice in the same place”. And again “Of all people, why you …?”

I slept well on the first night following this re-procedure, without sedatives or analgesics, and the first thing I did upon awakening the following morning was to tilt my head back to see if there was more ink in the sky. Thankfully, there wasn’t any. Vision was still poor, as expected. There was an orange-brown haze, but much less intense than that observed following the first procedure. At least, I thought to myself, we have avoided significant intraocular bleeding this time.

At the clinic the next day, IOP was a little low at 7 mmHg, but Mike didn’t seem at all concerned about this. I had some nasal bruising. Over the next few days my vision improved, but more slowly than expected, and I was getting very worried that something more sinister might be wrong. Vision at day three was still only ‘count fingers’. The bubble was reducing in size as expected, but the world was still hazy brown (Figure 2).

Figure 2. Left: The normal view from the back veranda of our house. Right: Simulation of the same view 3 days after the revision procedure. The thick black line is the top of the bubble.

I went into the clinic to see Mike on day seven. Vision had improved to 6/60, and IOP was 12 mmHg. Mike reported that he could see my fundus with the Volk lens, although it was still quite hazy. My peripheral retina appeared to be attached, but Mike still couldn’t get a clear view of my macula. My media was still too cloudy to perform optical coherence tomography.

I was aware of the bubble inside my eye slowly getting smaller day by day, and by day 13 it was gone. However, vision at this stage was still only 6/18, with a slight orange tinge. My vision continued to improve over the following week, and although I ended up with acuity of 6/5+, the world somehow didn’t look very clear.

It was at this stage that I noticed a kind of after-image just below the point of fixation in my right (operated) eye. Maybe I hadn’t escaped unscathed …