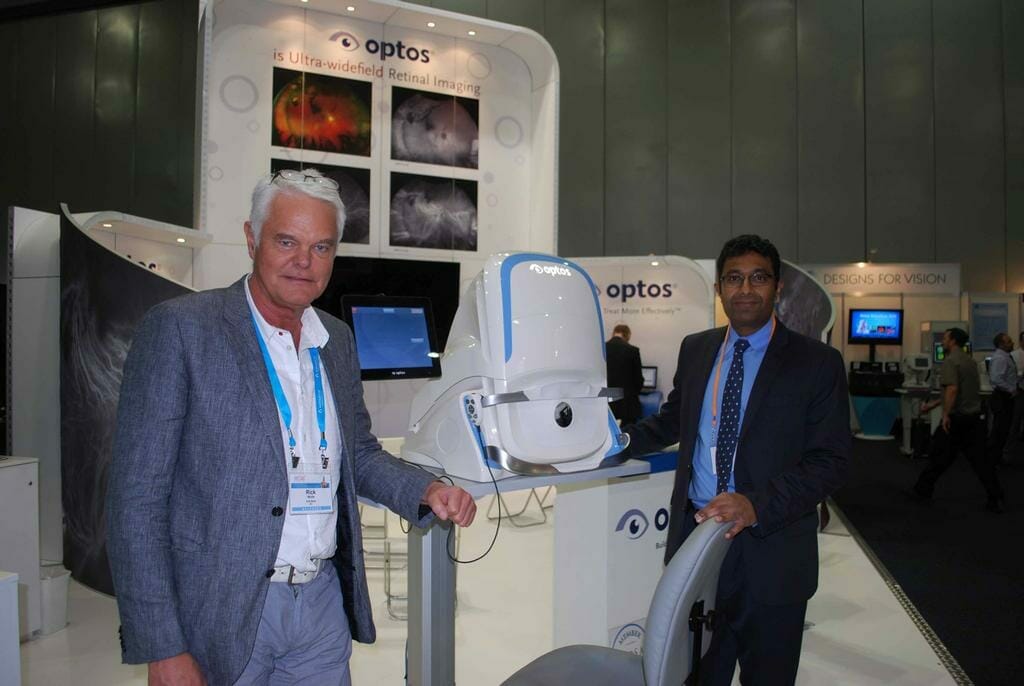 A US retinal specialist has warned that current screening of patients with diabetic retinopathy might be inadequate, without the use of ultra-widefield imaging as a standard screening tool.

Dr. Srinivas Sadda, an expert in retinal imaging and diagnostics based in California, said the availability of ultra-widefield imaging tools would inevitability lead to further research on the importance of the peripheral retina on a range of eye diseases.

He discussed the Optos California device which is described as “the most comprehensive ultra-widefield retinal imaging device on the market”.

It can view up to 82 per cent or 200 degrees of the retina, with Optus claiming it allows eye careprofessionals to see 50 per cent more of the retina compared to its closest competitors.

“Some ophthalmologists are obtaining an ultra-widefield image – or Optomap – even before seeing the patient,” said Dr. Sadda.

“I still look at it as a complement to the exam… but I will tell you that’s where the field is evolving to… unlike in the past, when you got a single 30 degree image or the like, here you can get, with a single quick acquisition, the entire retina… pretty close to the ora serrata.

“You usually have to steer them one way or the other to get the ora. I won’t say you get the ora consistently with every patient, but you can,” Dr. Sadda said.

One of the “huge advantages of the device – and this relates to this device in particular, the different Optos devices – is that you can actually get through a small pupil. So we get these beautiful images out to the peripheral retina, undilated.

“Our cataract guys (surgeons), what they do is they get this (an ultra-widefield image) on every patient before cataract surgery.

Even if you have a tiny break in the opacity, you can get an image. We use that as a screening tool.”

Dr. Sadda said while the full range of careful research studies on all the possible advantages of the device hadn’t yet been done, “people were just using it” and, in the process, discovering things about the importance of the peripheral retina. One of the consequences of using ultrawidefield imaging as a screening tool on patients with diabetic retinopathy, for example, was that ophthalmologists in the US were “finding neovasculation we didn’t suspect”.

“We find it all the time in diabetics where there looks like there’s not much retinopathy, you get this (ultra-widefield imaging)and you see all this peripheral retinopathy.

Ophthalmologists could be “under-staging patients with diabetic retinopathy” because “it looked like they had relatively little disease (when) out in the periphery there was a lot of retinopathy,” Dr. Sadda said.

“For diabetic retinopathy screening it has the advantage of not only detecting this peripheral retinopathy better, which may be important, but also that your rate of gradable images is higher because cataract and small pupils don’t undermine the images as much as our standard non-myd photos.”

He said the importance of the peripheral retina to the progression of diabetic retinopathy could have been understated with some research suggesting: “Patients who had mostly peripheral lesions, as opposed to mostly central legions, those patients, if they were followed up four years, they had a higher rate by several-fold of progressing to proliferative disease…”

Dr. Sadda said that now ophthalmologists had a tool that could view the peripheral retina, its importance in a range of diseases and conditions was being reassessed.

Previous studies on diseases such as diabetic retinopathy and age-related macular degeneration didn’t study the peripheral retina because the tools didn’t exist. Now that peripheral changes can be documented, he predicted research would show “that part of the retina really seems to matter”.