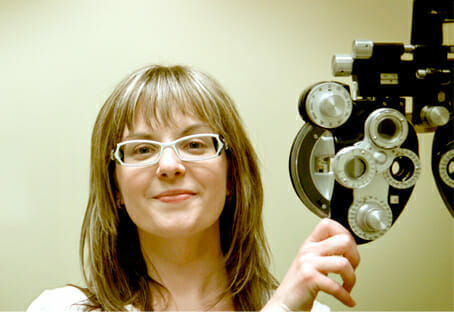 The Australian College of Optometry has invited Adelaide based optometrist and comedian Dr. Rachel Sommer to address delegates at its annual national Conference which runs at the Melbourne Cricket Ground from 22 – 23 October. Dr. Sommer will present at the Sunday breakfast session.

An interview with Dr. Sommer sheds a little light on how she manages her sanity while juggling two disparate occupations and a family.

How do you balance optometry / comedy / motherhood?
You are assuming that I balance all these things! I attempt to balance these things and I have some success because I have a great supporter in my husband. He’s the one that puts the kids to bed while I go to comedy clubs or corporate gigs. I only work two days/week in optometry, am a stay at home Mum the rest of the time and comedy sort of fits in the cracks. I don’t have a lot of sleep! I’ve done comedy shows as close as 10 days before giving birth and four days after giving birth. But, I do think I’m better at being a Mum/optometrist/comedian because they all exist together.

Do you prefer optometry or comedy?
Depends on the day! But, if I could write comedy all day and get paid like an optometrist, I would do it. I really love writing my TV sitcom idea Hindsight (about an optometrist comedian), new jokes or sketch comedy. Optometry is a wonderful profession which I do enjoy, but there is just something about comedy. If I won the lottery, I would be sitting at my computer writing jokes about winning the lottery.

Do you incorporate your comedy routine into your optometry practice? Vice versa?
I think I inject an appropriate amount of humour into my consults. I’ve always found that humour relaxes people and creates an instant rapport but you don’t want to cross the line into being a clown. No one wants a clown optometrist. Except maybe children. And they don’t care; they just want you to juggle.

I always include an optometry portion in my comedy routine. It’s what separates me from the other comics and audiences love it. I’ve had patients come to see me because they saw my act and they’ll tell me my jokes back to me in the chair.

What will your presentation at the ACO Conference be about?
I will be talking about things like: how I got started in comedy, what a joke is, how to write jokes, how to structure a set list for stage, how to perform on stage, how to write a TV sitcom, what to do if you are interested in comedy, where comedy and optometry overlap (and do they?), three things that you should never say to a comedian plus entertaining stories, hilarious video clips and excessive name dropping. All that in 50 minutes plus questions? Impossible! If you only attend one lecture this conference, make it this one. Rated 5 stars by my Mum.

How did you get started in comedy?
Although I am Canadian, I actually started doing stand-up comedy in Australia in 2003. I moved to Australia in 2000 to attend optometry school in Melbourne. I had just finished my degree and got a great job with a big optometry company in Australia. Part of my job offer was that I had to move to Darwin. I had moved there with a bunch of friends from university (one being Sophie Koh) and we were actually just walking down the street and one of them noticed a poster for the Triple J Raw Comedy Competition that was coming to town. The poster stated that it was for amateur comedians and that you just had to do 5 minutes on stage. My roommates, who are very encouraging, turned to me and said, “You should enter. You can be funny sometimes.” I was a little hesitant about going up on stage, but again, my roommates said, “It’s Darwin, there will probably be 10 people there and if you bomb, no one will ever know. I entered the competition, completely scripted my five minutes and practiced them religiously for the weeks leading up to the competition. I get to the competition, and it turns out it is the biggest comedy event in Darwin. All my friends and co-workers had shown up. There were 12 other competitors, 300 people in the audience, and Triple J had flown a famous comedian (Charlie Pickering) from Melbourne up to Darwin to host the night. I felt like vomiting. I did my five minutes and I ended up winning the competition.

My children think my husband is hilarious. I told a funny story at the dinner table the other night and my son asked, “Mom, is that a joke?”

A few weeks later, I get a phone call saying that they took all the best acts from all the cities that participated in the competition and they are having a big finale in Melbourne as part of the Melbourne International Comedy Festival. I was chosen. So, I get flown to Melbourne to do my act at the Melbourne Town Hall where it will be televised. My second gig ever was in front of 2000 people and on TV. The finale was played on ABC TV in Australia and was subsequently bought by Qantas Airlines. My friends complained that every time they took a flight that year they had to watch my act.

Where are you currently practising optometry?
I have recently moved back to Adelaide and am practicing as a locum optometrist. I am working for Opti-Call Visiting Eyecare, a mobile company that tests residents in aged care home facilities.

Do you have any shows/tours/upcoming events?
I have a fairly regular gig where I do stand-up before a movie premiere. It’s actually a great gig because I have a captive audience and I get to watch the movie after. I am also doing spots at the Crown and Anchor pub comedy night which is quite popular in Adelaide. I am looking at doing something with the Adelaide Fringe for 2017 or 2018 and also marketing my TV show idea, Hindsight for Australian audiences.

Do your children think you’re funny?
My children think my husband is hilarious. I told a funny story at the dinner table the other night and my son asked, “Mom, is that a joke?”

Registrations for the ACO National Conference are now open (earlybird available until 30 June).