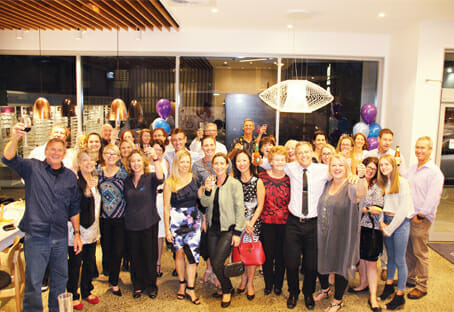 EyeQ Optometrists have celebrated the opening of new practices in Batemans Bay on the NSW south coast and Port Macquarie on the state’s north coast.

The EyeQ practice at Bateman’s Bay was opened by optometrist Tony Ireland. Tony is no stranger to practice management – Batemans Bay is his second Franchise Associate practice alongside his joint venture franchise with Bayd Rosenbaum in Merimbula, and his corporate practice in Ulladulla. Having quietly opened his new practice on 5 September, Tony welcomed an enthusiastic group of new patients, suppliers and professional supporters to the official opening on Tuesday, 25 October.

In his address, Tony emphasised his commitment to delivering the most advanced eye health services to the community. He said although many practice owners would not establish a new practice with a significant investment in state of the art equipment, he had done so because he believed it to be very important and the investment had already paid off. “In our first week we had a patient present with diabetic macular oedema. Had we not invested in a Nidec Duo, we would not have identified the disease. As it was we were able to have her seen by an ophthalmologist on the same afternoon, who commenced immediate treatment.”

Tony said the new practice had been welcomed into the community. “What I’m finding here is the community is respecting our opinion and the advice we’re giving, both on their eye health and their eyewear as well – they see us as the experts.” Tony celebrated his 40th birthday on the day of the official opening and was excited about his career achievements to date and the future growth both personally and for the optometry profession.

Earlier in the month, optometrist Adrian Cornale held an official opening celebration for his new EyeQ Optometrists practice in Port Macquarie. Having opened its doors on 4 July, Adrian has already amassed a strong following of patients and healthcare professionals within the community. Many of them turned up to celebrate the opening which continued well into the night. Local GPs and ophthalmologists spoke particularly highly of Adrian, who has been practicing in Port Macquarie for 28 years prior to opening the new premises and joining EyeQ Optometrists. He said he was enjoying the transition to owning his own practice and noted that the local community was showing strong support.