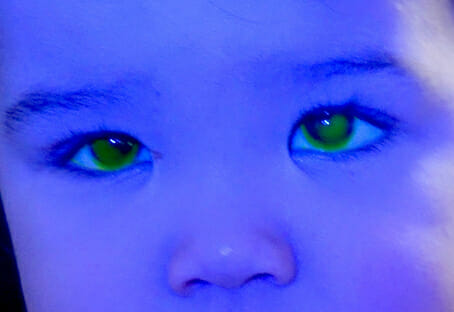 Managing babies with aphakia could be the most challenging yet rewarding task you take on.

EP first presented to the practice aged four months, referred by the Royal Children’s Hospital after a recent diagnosis of bilateral cataracts. In the past month, his mother had noticed that his eyes had begun to appear ‘white’ and started to ‘wobble’. EP was due to have right cataract extraction one week later.

A contact lens fitting was performed – trial RGP lenses were inserted with the initial lens selected by age appropriate norms, as measuring corneal curvatures is difficult at this age. The back vertex power of the lens could not be obtained until following the surgery as the refractive power of the eye would be very different following cataract extraction.

Contact lenses are the preferred option for treatment of infantile aphakia

At the delivery one week after surgery, retinoscopy of the contact lens revealed an over-correction of R -4.00DS. The lens appeared well fitting. The parents were taught insertion and removal and the lens was dispensed.

Two weeks later, the left cataract was removed, and a contact lens of L 7.55/11.4/+32.50 was prescribed. The fluorescein fitting pattern revealed that both lenses were well aligned with generous edge clearance (Figure 1).

EP continued to do well with these lenses, which were worn on a daily wear basis. His lenses needed to be modified as the shape of his eyes changed. As his corneal curvatures flattened with growth, his previously well-fitting lenses began to appear steep fitting – shown by central fluorescein pooling and sometimes bubble formation. His eyes also elongated axially, causing myopic shifts, evidenced by an increase in the degree of over-correction with his contact lenses.

At this time, back up spectacles were prescribed. These were of prescription +18.00 (Figure 2).

Visually significant infantile cataracts cause deprivation amblyopia, thus prompt removal of the cataract is required to allow vision to develop, especially during this critical period of development.3

Unfortunately, glaucoma is a common complication occurring after infantile cataract removal. Many of these infants will develop glaucoma or become glaucoma suspects.4,5 IOL implantation does not appear to alter the risk of developing glaucoma. Cataract surgery at an earlier age has been shown to significantly increase the risk of glaucoma, with the greatest risk when surgery is performed in the first month of life.6 Glaucoma can present early on, or even decades after cataract surgery,5 hence lifelong management for these patients is required.

Unlike adult cataract operations, which normally involve intra-ocular lens implantation after cataract extraction, infants born with congenital cataracts are usually left aphakic. Intra-ocular lenses are not typically used for infants while the eye is growing rapidly and becoming less hyperopic. If the baby is left emmetropic following surgery, they will be significantly myopic later in life. If they are left hyperopic with the goal for emmetropia later in life, the baby will still require refractive correction immediately following surgery. In addition, IOL implantation at the time of surgery for these infants is associated with a higher rate of postoperative complications, including posterior subcapscular opacification and sublaxation of the intra-ocular lens.3

Spectacles at high plus powers will induce considerable spectacle magnification, peripheral aberrations and reduced field of view, as evident with EP’s spectacles. They are heavy and are often poorly tolerated. Spectacles are not an option for unilateral cataract infants due to the marked aniseikonia induced.

Contact lenses are the preferred option for treatment of infantile aphakia. They may be readily applied and changed, and do not have the same degree of distortion as spectacles at this high power. However, the parents/carers have to be highly motivated for contact lenses to be successful. Handling lenses on a young child can cause distress for both carer and child. The carer needs to be educated about the importance of visual stimuli in this early critical age of development.

Soft lenses today are a more viable option than they were in the past as there are now silicone hydrogel materials available in high plus powers. While these lenses afford greater initial comfort and are relatively easy to fit, they are far more difficult to handle on an infant.

Silicone elastomer lenses (Bausch and Lomb SilSoft) are widely used throughout the world. They are composed of silicone and allow excellent oxygen transmissibility. However, they are far more prone to deposition and binding, are difficult and expensive to obtain in Australia, and are only available in limited parameters.

RGP lenses are my preferred lens of choice, particularly for infants. RGP lenses can be customised to virtually any parameter, are easier to handle, have a lower rate of adverse events and afford excellent oxygen permeability. RGP lenses also offer superior optics and are less prone to deposition compared to other lenses.

The ideal RGP lens fit is an alignment fit with appropriate edge clearance. Larger diameters are used, with these lenses covering most of the cornea and often extending onto the conjunctiva to afford greater stability. Smaller optics and highly permeable lens materials are used to reduce lens thickness and weight and increase oxygen permeability. As these infants are aphakic, they lack a normal accommodating ocular lens. Hence, these infants have a uni-focal eye, and thus need to be over-corrected to provide a clear near focus. Assessing the lens can be difficult in an uncooperative patient, and obtaining a good view with a portable slit lamp can often be a challenge. However as these patients tend to have relatively normal corneas, sodium fluorescein and a source of blue light will usually do the trick.

As these eyes grow, the corneal curvature will flatten and the eye will become less hyperopic. The greatest rate of growth occurs in the first year of life, hence during their early life frequent changes are required.

Prescribing lenses to babies can be difficult and stressful at times. The thought of inserting contact lenses in babies’ eyes is foreign to most, however despite the challenges, this has been the most rewarding and satisfying part of practice for me. Seeing big smiles like EP’s (Figure 3) makes all the crying, kicking and screaming worth it.

Jessica Chi is the director of Eyetech Optometrists, an independent specialty contact lens practice in Melbourne. She is the current Victorian and most recent past National President of the Cornea and Contact Lens Society, and an invited speaker at meetings throughout Australia and beyond. She is a clinical supervisor at the University of Melbourne, a member of the Optometry Victoria Optometric Sector Advisory Group, a fellow of the Australian College of Optometry. Jessica writes ‘mipatient’ on alternate months with Margaret Lam.

Correction for my July MiPatient – I have been informed that SilSoft is available in Australia. Bausch + Lomb Australia hold stock inventory, and subsidise the product as part of their commitment to assisting families with aphakia.