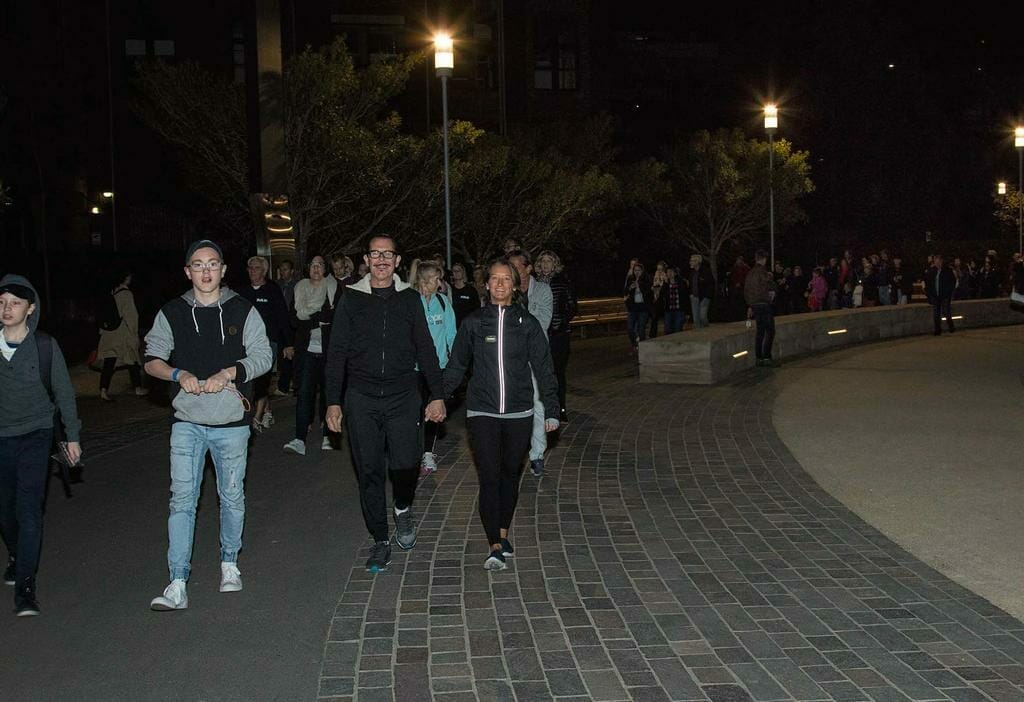 The first ever EYECon Night Walk has been staged in Sydney’s Barangaroo.

Hosted by The Eye Surgeons’ Foundation to celebrate the culmination of JulEYE, participants in the community event walked a 5km course while taking in the city’s most famous EYEcons – Anzac Bridge, Sydney Harbour, Circular Quay and the Overseas Passenger Terminal – from different vantage points. EYECon walking maps were also available for communities in Melbourne, Brisbane, Adelaide and Perth.

The Sydney EYECon event kicked off at 5pm at Nawi Cove, Barangaroo, with face painting for the children, an Apgape Food truck and a DJ. Additionally, a Q&A with paediatric ophthalmologist Dr. Caroline Catt, her 11-year old patient Beth Silgar (who lives with chronic relapsing inflammatory optic neuropathy) and JulEYE ambassador, INXS band member Kirk Pengilly enabled participants to learn first hand about the experiences of people with eye disease. Mr. Pengilly was in his 20s and touring with INXS when he almost lost his sight to severe glaucoma. He lead the community walk with his wife Layne Beachley along with his family.

Blindness Struggled With Most

Every year in Australia, more than 1,600 children are diagnosed with significant vision impairment – an average of four children a day whose lives will change forever. They are among the thousands of Australians of all ages who needlessly go blind or require eye surgery each year.

Australians rate blindness as the health condition they would struggle most to live with. Lisa Cheng, CEO of The Eye Surgeons’ Foundation, explains: “Visual impairment is not just a problem for the ageing. Losing your sight to eye disease such as glaucoma, macular degeneration, diabetic retinopathy and other rare diseases is a life sentence, and one that affects more than 435,000 Australians. Vision loss adversely affects people’s independence and ability to go about living their daily lives, and for those without supportive family and friends it negates any reasonable quality of life.”

The main eye diseases that cause vision loss are glaucoma, macular degeneration, diabetic retinopathy and numerous rare eye diseases. While regular eye tests are the most effective way of detecting changes and identifying problems early, research is essential to find a cure.

“With 75 per cent of Australians needlessly vision impaired and the other 25 per cent needing a cure, The Eye Surgeons’ Foundation has made it our goal to create a future where no one is blind,” says Ms. Cheng.

“To achieve this we must continue to support world-class research, and invest in the future of eye health by working with visionaries in their field – the eye surgeons, researchers and academics.”

It’s not too late to donate to JulEYE. Visit: Juleye.com.au