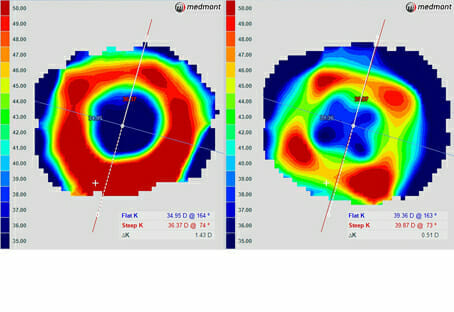 Sometimes, despite best practice, there are factors that we simply cannot control.

In the September issue of mivision, I reported the case of MR, a 42-year old male who had radial keratotomy (RK) in 2000 for treatment of his moderate myopia. He had a subsequent significant hyperopic shift in the right eye years following the procedure. His refractive status was R +6.00/-1.00×97 (6/7.5) and L plano/-0.25×37 (6/6). His corneal topography was irregular as a result. (Figure 1). He was fitted with a soft daily disposable spherical contact lens for his right eye, which enabled excellent contact lens acuity of R 6/7.5 and excellent comfort.

MR returned to my practice four months after he had been prescribed the lenses, earlier than his planned six month review. He reported that his contact lens was working well most of the time, however he suspected there some were faulty lenses in his batch. There had been two prior occasions when he put a lens in and experienced dizziness and nausea. When this occurred, he had removed the lens, inserted a new lens and his symptoms disappeared. However, upon inserting his lens this morning he had experienced these symptoms, and discarding the lens and reinserting another did not alleviate his symptoms. He reported right blur, dizziness and headache.

even with a perfect lens, there is one factor we cannot perfect, and that is the patient

MR was understandably very concerned when he could not discern even the biggest letter on the chart when at the last review he could achieve 6/7.5.

There were various possible explanations for MR’s reduced vision. When a patient presents with a sudden change in vision it is to run through these thought processes methodically, and importantly, to eliminate any sinister causes.

Perhaps MR was correct – perhaps there were a few ‘bad lenses’ in the batch. However, today, this is not a common problem with modern manufacture due to improvements in efficiency and reproducibility of contact lens moulding. Seventeen years ago, in 1999, Efron, Morgan and Morgan measured the reproducibility of several daily disposable contact lenses and found them to reliably meet ISO standards.1 Anecdotally, I have found that manufacture of disposable contact lenses has continued to improve, and it is rare that lenses come in significantly faulty.

So what could be the cause of his reduced vision? Pathology had to be ruled out. Prior to surgery, MR was a myope and while RK had left him hyperopic, he still has a myopic fundus. It was important to rule out retinal detachment, maculopathy and cataract. Fortunately, his retinal health was unremarkable.

Following RK, patients can become progressively hyperopic, with the change often occurring years following surgery. In addition, RK patients can experience quite significant diurnal fluctuations, with some experiencing up to a couple of diopters shift.2 This would seem a plausible cause for MR’s symptoms, however, as his symptoms had been immediately alleviated by removal of his contact lens and insertion of a new one, it would seem that the cause would be more likely to be related to the contact lens.

When a patient presents with a sudden change in vision with their contact lenses, clinical experience causes me to question whether the patient has mixed up their lenses. This is a patient error that occurs surprisingly often, and often results in a relieved yet embarrassed patient. However, MR only wore a lens for one eye, and patients rarely insert the lenses into the wrong eye if they are managing only one.

I did not bother to over-refract MR before I performed slit lamp examination. I had suspected what happened as while being greeted by the reception staff, I overheard him saying he was hung-over. When I assessed MR’s contact lens, I found not one, but two contact lenses in the same eye (Figure 2). While inebriated the night before, MR had believed he had removed his contact lens, but obviously had not. He had then woken up, and inserted a new lens on top of the lens worn overnight, thus resulting in him being significantly over-corrected. The prior two times this had occurred, he had removed the lens but both had come out at the same time. This time, only one had been removed and the other lens stayed in his eye while he inserted another one above it.

Various studies have tried to quantify contact lens compliance levels, and despite education and training, it would appear that almost all patients are non-compliant. An international survey performed in 2010 revealed that patients across all contact lens modalities were consistently non-compliant with all steps in their contact lens care (Figure 3).3 Only 14.7 per cent of daily disposable contact lens wearers reported full compliance, however this is far greater than all other modalities which reported 0–0.2 per cent.3

MR was wearing the ‘most compliant’ modality, however compliance is often reported to be worse in men compared to women, with compliance reported worst in young men.3 Despite being an educated individual who had no intention of being non-compliant, MR got drunk and did not realise he had slept in his lenses. MR, however, had only left one lens in his eye, which does not begin to compare to the woman in the UK many of you would recently have read about, who managed to have 27 contact lenses lodged unknowingly in her eye.

Compliance with contact lens wearers is arguably one of the most challenging aspects of contact lens practice. Contact lens technology continues to improve, with lenses becoming more oxygen permeable, more wettable, more bio-compatible, however even with a perfect lens, there is one factor we cannot perfect, and that is the patient.

Jessica Chi is the director of Eyetech Optometrists, an independent specialty contact lens practice in Melbourne. She is the current Victorian, and a past National President of the Cornea and Contact Lens Society, and an invited speaker at meetings throughout Australia and beyond. She is a clinical supervisor at the University of Melbourne, a member of the Optometry Victoria Optometric Sector Advisory Group and a fellow of the Australian College of Optometry and the British Contact Lens Association. Jessica writes ‘mipatient’ on alternate months with Margaret Lam