Connect with:
HomeminewsOculentis Recalls IOLs Manufactured Between Jan 2012 and May 2015
minews
author: mivision

Oculentis Recalls IOLs Manufactured Between Jan 2012 and May 2015

Oculentis has issued a global voluntary Field Safety Notice for Oculentis intraocular lenses (IOLs) manufactured between January 2012 and May 2015 (expiry dates between Jan 2017 and May 2020).

The global notice was issued on 11 September, 2017 and consequently, a Medical Device Recall was issued in Australia and New Zealand on 14 September for all affected shelf stock.

The recall does not include implanted lenses and specifies that “there is no need for explanting or review of patients where the lens has been implanted”. In some rare cases, the opacification may compromise the optical transparency of the IOL in time, potentially leading to a slow reduction in visual acuity.¹

The voluntary recall was prompted by a study conducted at the Institute of Chemical Engineering Sciences, University of Patras, Greece under the leadership of Prof. Petros Koutsoukas and in collaboration with the Patras University Clinic of Ophthalmology as well as Dr. Richard Packard and Prof. David Spalton, two renowned ophthalmic surgeons from the U.K.

The study revealed that the “surface calcification could possibly be the result of phosphate remnants originating from a detergent previously used in the cleaning process of the IOL”.²

Managing Directors of Oculentis GmbH, Ben Wanders and Mark Lansu, have advised, in a letter sent to Oculentis customers, that Oculentis GmbH ceased use of the phosphate–containing cleaning agent, which contributed to the calcification of some Oculentis lenses, in May 2015 and that “all currently produced Oculentis products and all products on the market with an expiry date of 6/2020 or later (manufactured from 06/2015 onwards) are unaffected by this recall.”³

The Patras Study demonstrates that Oculentis lenses produced after May 2015, where the suspected cleaning agent is no longer present, behave equal or better to the control group, consisting of competitive products (refer Graph 1). 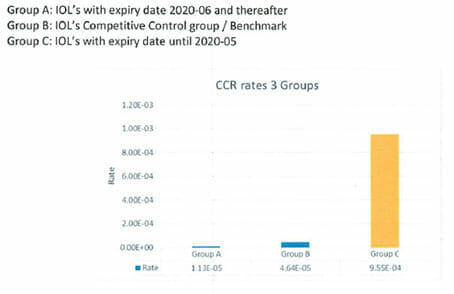 Device Technologies ANZ (DTA) can confirm that no Oculentis lenses produced since June 2015 have been reported to DTA with suspected calcification. DTA Product Complaint Records show that the current confirmed incidence of calcification for lenses, affected by the recall and sold by DTA, is close to one in 2,000. Product Complaint Records also show that calcification, in these rare cases, typically becomes apparent between two and three years after implantation.

Almost 50 Years on, Contact Lenses Keep On Keeping On