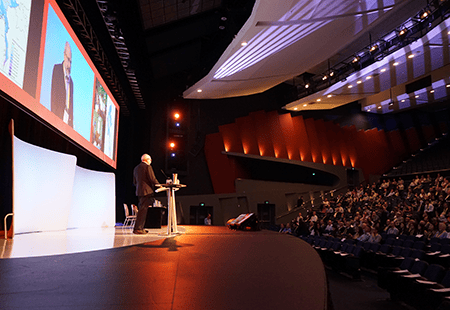 The Royal Australian and New Zealand College of Ophthalmology (RANZCO) hosted its 49th Annual Scientific Congress from 27 October to 1 November at the Perth Convention and Exhibition Centre. More than 1,000 ophthalmologists, orthoptists and practice managers took part in sessions over five days and left revitalised and inspired.

RANZCO’s 49th Annual Scientific Congress in Perth was a brilliant opportunity to hear the latest in research and technology, and socialise with colleagues against the spectacular back drop of Perth’s Swan River. Keynote speakers were invited from both Australia and New Zealand as well as from around the world to share insights into their fields of expertise.

Glaucoma was in the spotlight in both a plenary session and an update symposium. Dr. Anne Coleman from the Jules Stein Eye Institute in the United States was this year’s invited glaucoma speaker. She gave a fascinating summary on lifestyle, nutrition and diet and their associations with glaucoma. Her group used the National Health and Nutritional Examination Survey (NHANES) to look at factors like caffeine intake, chemical exposure, antioxidants, vitamins, fatty acids, smoking, sleeping position and exercise and whether there was an association with glaucoma. After exhaustively analysing the data, she concluded that to minimise one’s risk of glaucoma you should not be exposed to cats (yet dogs are protective) or pesticides and ensure less than five cups of coffee per day!

Professor Bob Casson also discussed the concept of bio-energetic neuro-protection in glaucoma. He referenced experimental work centred on modifying glucose, vitamin B and fat intake to allow retinal ganglion cells to recover from glaucoma in the laboratory. Further to Dr. Coleman’s work, he even postulated the need for an ‘AREDS-style’ study looking at the role of diet in glaucoma.

Technology was the flavour of the retina congress this year

Minimally Invasive Glaucoma Surgery (MIGS) was again the subject of a symposium, with several leading experts giving their opinions regarding both suprachoroidal and trans-trabecular stents. In Australia, these stents are placed at the time of cataract surgery in order to reduce intraocular pressure (IOL) in patients with primary open angle glaucoma already treated with glaucoma drops. The perceived advantages of MIGS include preservation of the conjunctiva, minimising sub-optimal compliance with drops, improving quality of life in patients with ocular toxicity and a cost reduction over the patient’s lifetime with drops. In addition, the surgery can be performed earlier in the course of the disease as opposed to filtering procedures, which are traditionally reserved for advanced glaucoma. Devices such as the iStent Inject are available in Australia and can be considered for patients with mild to moderate open angle glaucoma at the time of cataract surgery. While there are many different options available on the market, Dr. Coleman concluded the session by reiterating the need for standardised high-quality trials and comparisons between devices.

Technology was the flavour of the retina congress this year. Perth welcomed home one its favourite sons in Professor Lyndon da Cruz. Professor da Cruz is originally from Perth where he did his medical training. He now lives in London where he is a vitreoretinal surgeon at Moorfields Eye Hospital and the Professor of Stem Cell and Retinal Transplantation at UCL. One particular area of his interest is combining stem cell research with the emerging utilisation of robots in ophthalmology. He highlighted widespread use of robots in other specialities such as urology and gynaecology and pointed out that the technology associated with femto-assisted cataract surgery does fit the criteria of being a robot! He discussed why we need robotics in VR surgery – currently, delivery of new therapies such as stem cells and gene therapies exceed what manual surgery can achieve. These new therapies will require cells to be directly introduced into the retina or vasculature and so precision is paramount. He envisions a future where there will be tools such as tremor minimisers and “tele-robots” routinely used intra-operatively.

Dr. Bonnie Henderson from Tufts University School of Medicine in the US discussed the phenomenon of negative dysphotopsias in the Cataract Update Lecture. Surprisingly, these were only first defined in 2000 by JA Davison in a paper in the Journal of Cataract and Refractive Surgery (Davison, 2000). These are a crescent shaped dark shadow appearing in the patient’s temporal vision after cataract surgery. While it can be experienced in up to 15 per cent of patients in the immediate post-operative period, it appears to be permanent in only one in five sufferers. Their aetiology, and therefore treatment, have remained somewhat controversial. In 2015, Dr. Henderson performed a literature review and summarised the risk factors for permanent negative dysphotopsias to include patient anatomy (specifically when the nasal retina is highly functional, or they have a shallow orbit or a prominent globe), IOLs with truncated edges or a high refractive index (acrylic) or a small pupil (Henderson & Geneva, 2015). When negative dysphotopsias occur, they can be extremely debilitating for the patient and treatment is difficult. Non-invasive treatment options include counselling, dilating drops, use of sunglasses or glasses with thick frames to block temporally entering light or operating on the second eye. However there is a 50 per cent chance of negative dysphotopsias occurring in the fellow eye. More invasive options that have been tried include performing a YAG capsulotomy of the anterior nasal capsule to reduce the reflections from the capsular edge to the nasal retina. This was validated in 2013 in a small series resulting in a 50 per cent success rate (Folden, 2013). Other surgical options include reverse optic capture of the IOL, inserting a piggy back IOL into the sulcus or IOL exchange. These would only be undertaken after at least six months to allow some degree of neural adaptation. Dr. Henderson also emphasised preventative approaches, including choosing IOLs with low refractive indices and rounded edges. She also conducted a prospective masked multicentre trial to determine whether orientating the optic-haptic junction infero-temporally resulted in a lower incidence of negative dysphotopsias. They found a three-fold decrease incidence in the group with the IOL orientated infero-temporally in the immediate post-operative period compared with an IOL oriented vertically (Henderson B. e., 2016). However, this difference did not persistent beyond four weeks. In Jack Holladay’s recent update on prevention of this issue, he recommends the optic-haptic junction not be oriented horizontally to minimise risk of dysphotopsias (Holladay & Simpson, 2017).

There was an entire symposium on postoperative diplopia after cataract surgery. Professor Frank Martin highlighted those who are not suitable for mono-vision after cataract surgery including patients who have long standing strabismus or a phoria, poor fusional amplitudes and weak ocular dominance. He cautioned all cataract surgeons to take an adequate history on these matters to minimise post-operative dissatisfaction. In addition he advised all surgeons to introduce the concept of a ‘compromised concept’ with monovision – that is, it will provide useful vision for casual use but for sustained near tasks or quality distance vision glasses will be required.

Dr. Wendy Marshman gave an excellent summary of issues around local anaesthetic and diplopia after cataract surgery. With peri-bulbar and retro-bulbar anaesthesia there is a risk of injection into, most commonly, the inferior rectus muscle which results in an initial temporary paresis and a hypertropia. In a minority of cases (0.1-0.2 per cent) this can then evolve into inferior rectus fibrosis with a resultant hypotropia and vertical and torsional diplopia. Dr. Lionel Kowal also touched upon the ‘sensory’ causes for diplopia post cataract surgery, including monovision, aniosometropia and ‘sagging eye’ syndrome. Sagging eye occurs usually after the age of 60 without any central nervous system imaging abnormality. Usually, the lateral recti’s insertion into the globe shifts inferiorly, resulting in esotropia that’s greater for distance than near.

The RANZCO Annual Scientific Congress was once again the perfect blend of incredible scientific content and interesting social catch ups. We look forward to bringing you an update from Adelaide in 2018!

Dr. Amy Cohn is a Melbourne based ophthalmologist with special interest in medical retina and cataract surgery. She trained at the Royal Victorian Eye and Ear Hospital before completing a cataract surgery senior registrar year at Southern Health. After this she relocated to London where she undertook nearly three years as a Medical Retina Fellow at Moorfields Eye Hospital. Upon her return she has taken up VMO posts at RVEEH and Southern Health. She is also a Senior Research Fellow at the Centre for Eye Research Australia. She sees patients privately in East Melbourne, Footscray, Glen Waverley and Armadale. Amy is on the RANZCO Scientific Review Committee responsible for selecting papers and posters for the annual congress.