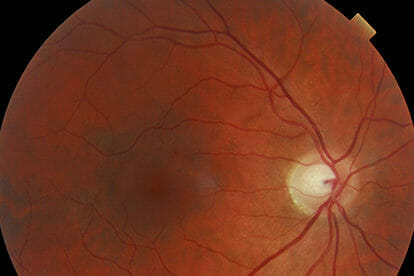 Onset of central serous chorioretinopathy can be distressing for patients. In most cases it willresolve without treatment and little loss of vision.

KP, a 29 year old male academic presented to the practice complaining of a four day history of blur in the right eye, which he suspected was solar retinopathy from looking at a bright light (the strong reflection of a building covered in mirrors). He could not recall having had his eyes tested previously, and had never had any problems with his eyes. He reported good health, was not taking any medication, but had experienced personal stress some months prior, having finished his PhD and separated from his wife.

KP was diagnosed as having central serous chorioretinopathy.

Central serous chorioretinopathy (CSCR) is a serous detachment of the neurosensory retina at the macular area. CSCR typically affects men between the ages of 20 and 45, and is six times more common in men than women. The incidence per year in men is 10 per 100,000. Risk factors include steroid usage, type-A personality, psychological stress, psychopharmacologic medication use and pregnancy.1,2

CSCR is due to the leakage of fluid from the choriocapillaris beneath the retinal pigment epithelium (RPE) resulting in serous neurosensory retinal detachment. The pathophysiology is not fully understood, but it is believed to be caused by hyperpermeability of choroidal vessels, dysfunction of the autoregulation of the
choroidal vasculature and impairment of retinal pigment epithelial barrier or pumping mechanism.3

Symptoms include reduced vision, central scotoma, micropsia, metamorphopsia and dischromatopsia. Fundus and OCT signs include a round, well-demarcated detachment of the neurosensory retina at the macula with fluid beneath the macula.

Solar retinopathy results from photochemical damage of the retina normally the macula – from prolonged exposure to bright light. This may present with a slight macula oedema in the initial stages, which will resolve, then develop to a yellow foveolar spot evolving to a wellcircumscribed red spot. KP’s OCT images clearly showed subfoveal fluid rather than macula oedema. The amount of light from the building that KP described is unlikely to have resulted in solar retinopathy. Recent media about solar eclipses and President Donald Trump looking into the sun probably, primed KP to believe this was the cause, particularly given his type A personality.

CSCR is normally self-limiting and resolves spontaneously within three months. Hence, newly diagnosed cases may be monitored without treatment. Recurrences are seen in half of patients within the first year, and ten per cent of cases will have at least three episodes. Half the patients with multiple episodes will have recurrence within the first year of the first episode.3 Most cases will resolve with little loss of acuity, however patients may be left with abnormal colour vision, metamorphopsia, micropsia and relative scotomas. Visual prognosis is worse in cases which develop persistent or recurrent foveal detachments, choroidal neovascularisation, subfoveal retinal pigment epithelial atrophy and subretinal fibrosis.

To increase the chance of spontaneous resolution, risk factors that could contribute to the condition should be addressed, including discontinued or reduced steroid use, and life style modification to reduce stress.

Treatment is reserved for a CSCR episode that does not resolve within three months, chronic CSCR, recurrent CSCR, when the fellow eye has suffered permanent vision loss from CSCR, or when there are occupational or other needs for a patient requiring faster recovery. However, efficacy of treatment modalities is contentious. Efficacy of medical treatments is unknown, and corticosteroids should be avoided as they have been shown to be associated with CSCR. Intravitreal anti-vascular endolthelial growth factor injections have not been shown to be effective at treating CSCR, except when treating choroidal neovascular membranes secondary to CSCR.

Laser photocoagulation can hasten the resolution of CSCR, however should be used with caution as it does not influence the final visual outcome or the chance of recurrence, and can result in permanent scotoma and laser-induced choroidal neovascularisation.

Photodynamic therapy (PDT) with verteporfin is thought to induce choroidal hypoperfusion and vascular narrowing and remodelling, however it can lead to adverse effects of choroidal ischemia, RPE atrophy and secondary choroidal neovascularisation. Thus, reduced dose PDT has been used, which results in faster resolution of CSCR and earlier recovery of visual acuity compared to laser photocoagulation, as well as resulting in less adverse events.

KP was reviewed five weeks after his initial consultation. He reported that although his symptoms had not subsided, he had noticed an improvement in his vision. His vision unaided R 6/9 had corrected to R6/7.5 with R +0.75DS.

OCT revealed a reduction in central macular thickness. The subfoveal fluid had shifteddownwards and temporally (Figures 4 and 5).

KP will be reviewed in a further two months, with a reasonable expectation that his CSCR will resolve spontaneously. However, if his case were to continue and his CSCR were to become chronic, referral for treatment would be indicated.