Jonathan Hennessy Sceats, creator of Jono Hennessy, Carter Bond, and Zeffer, has been inducted into the prestigious Design Institute of Australia’s (DIA) Hall Of Fame.

The DIA Hall Of Fame celebrates the work of eminent Australian designers and their significant contribution to Australia’s economic development and cultural identity. It also highlights the current diversity in our community, reflecting a broad range of design disciplines.

Fellow Australian eyewear designer Peter Coombs nominated Mr Hennessy Sceats for the award, describing him as inspirational and his eyewear as beautifully crafted.

“At a time when colours were bold and shoulder pads were de rigeur, the name Jonathan Sceats was synonymous with Australian style and the ‘go to’ brand for many Australians,” said Mr. Coombs. “Jono’s frames tell the story of Australia; he has captured our essence and continues to enrich us with his beautifully crafted offerings… No doubt he has inspired many over the years – he certainly inspired me – and I’m thrilled by this accolade.”

Mr. Coombs said the recognition of Mr. Hennessy Sceats was, “positive for the entire eyewear industry”. 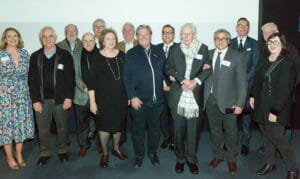 Mr. Hennessy Sceats said he was honoured by the Design Institute of Australia’s recognition and said he hopes his induction will enable him to have some influence at Government level.

“I’m trying to change the perception of designers… they are an important part of the process of product development and they should be treated as such. In Germany and Japan, designers are integrated into corporations at board level, I’d like to see the same respect for designers in Australia,” said Mr. Hennessy Sceats.

He believes the research and development grants available for consumer products in Australia are outdated. “They don’t have anything to do with where the economy is now,” he said, adding that because consumers are influenced in their purchasing decisions by the design of products as well as the technology, Australian grants should be for “design and development”.

Mr. Hennessy Sceats said induction into the DIA had also re-ignited his passion for the industry. “We have some of the world’s best eyewear designers in Australia – Peter Coombs is one of very few eyewear designers internationally to be invited to the exclusive Loft in New York, then we have Colin Redmond (Niloca), John Van Staveren and Paul Taylor – it’s a small group of design led eyewear professionals.

“I think that in Australia, although we can’t compete internationally in all industries, our eyewear industry shows we can compete in design and it is something I will be working to promote with the Australian Institute of Design.”