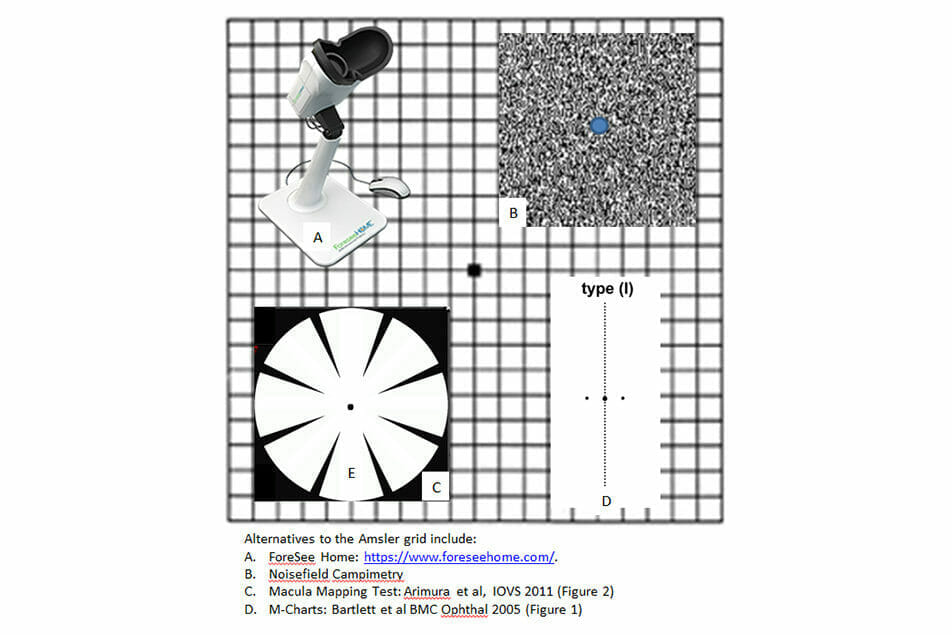 Australian optometrists, ophthalmologists and Macular Disease Foundation Australia alike all promote the use of the Amsler grid with the goal of detecting changes in macular disease in between scheduled examinations. In the current digital age however, is this simple grid still the best option? Centre for Eye Health staff reviewed the options.

While the Amsler grid has shown the ability to identify subjective symptoms in many studies, sensitivity may be as low as 34 per cent.1 Why is this so low? First we have to consider that the human brain is adept at filling in gaps in vision which can result in patients being unaware of smaller distortions,2 in particular those smaller than six degrees.3 Additionally, steady fixation on a central point may be challenging for many as it is not a task people are naturally used to, or good at, performing.2

Motivation, correct usage and feedback have also been shown to be limiting factors. One study found that only 10 per cent of people who noticed distorted vision actually reported it at the time.4 Another showed that six months after getting an Amsler grid for self-monitoring, 29 per cent of people never looked at it.5

IS THERE A BETTER OPTION?

There are a number of alternatives for selfdetection and monitoring of macular disease, including but not limited to the following:

The ForeSeeHome is a home-based monitoring device that transmits results direct to an eye care practitioner. It is currently commercially available in the US for around US$15 per month. The patient views a series of dotted lines, with each series containing a few dots out of alignment. If a larger area of misalignment due to a scotoma or metamorphopsia is present, then the brain preferentially detects the larger distortion.6 The sensitivity of Preferential Hyperacuity Perimetry is better than Amsler, but it has a higher rate of false positives.7 The cumulative cost may be a barrier for widespread use as it may take years for a patient to convert to neovascular age related macular degeneration (AMD).8

Noisefield campimetry requires the patient to report abnormalities seen against a background of small black and white randomly flickering dots.8 It has shown an overall sensitivity and specificity of 82 per cent and 100 per cent respectively in AMD8 but is not yet commercially available for home use.

The Macular Mapping Test involves the patient identifying capital letters which appear randomly in a ‘wagon wheel’, with spokes pointing towards the centre to guide fixation. This test also appears to be a promising tool for monitoring progression of AMD6 however, like Noisefield campimetry, it is not yet available for home use, and it is significantly more complex to use than the Amsler grid.

There are a range of other alternatives to the Amsler grid, including near acuity charts and self-monitoring, using familiar objects such as bathroom tiles. However most have lower sensitivity (33 per cent) and specificity (77.8 per cent) than the Amsler grid.10 One exception is the M-Chart, which has higher sensitivity and equivalent specificity to the Amsler, but is not as straightforward and easy for patients to use.9

Although the research shows that more sensitive methods than the Amsler grid do exist, a simpler, cheaper, easier to use home based alternative, which is also highly sensitive and specific for detecting late AMD and other maculopathy, is yet to be available in Australia. So for now, Swiss Ophthalmologist Marc Amsler’s concept from 1947 should remain bed, chair or fridge-side for AMD patients.

Lindsay Moore, BOptom (Hons) / BSc is a CFEH senior staff optometrist who has had a variety of clinical experience working in both optometric private practice and alongside ophthalmologists in Sydney, performing both pre and post surgical assessments. She has a specific interest in promoting collaborative models of care.

Agnes Choi, BOptom, MOptom, GradCertOcTher, is currently undertaking her PhD studies through CFEH where she has been a clinical optometrist since the Centre opened in 2009. Her research area is in early diagnosis of AMD using functional tests. Clinically, Ms. Choi is also involved in the provision of clinical care using electrodiagnostic tests.

13th OSO Conference to be Strong on Myopia