Connect with:
HomemipatientOCT and Me – A Beginner’s Guide
mipatient
author: Margaret Lam

OCT and Me – A Beginner’s Guide The use of Optical Coherence Tomography is becoming more prevalent in clinical optometric practice. This three part beginner’s guide will help you maximise its advantages.

(OCT) maps changes in refractive indices – it creates an image of the posterior vitreous, retina, retinal pigment epithelium and choroid.

Layers or structures that are homogenous – such as the vitreous – appear on an OCT image as areas that are dark. Layers with heterogeneity appear to be bright, for example, the retinal layers, especially the retinal nerve fibre layer.

OCT INTERPRETATION: WHERE TO START

In clinical practice, combining fundus photography and OCT imaging can help in the differential diagnosis of retinal, macular, chorioretinal lesions, anomalies at the vitreoretinal interface, and choroidal disease.

To interpret the retinal architecture or identify a lesion or anomaly, it is helpful to recognise the anatomic landmarks standardised by the International Nomenclature for Optical Coherence Tomography Panel by Staurenghi et al.1

The first landmark when reading an OCT is the dark vitreous, which sits above the highly reflective, brightly coloured Internal Limiting Membrane (ILM) (Figure 1). Another helpful landmark is the retinal nerve fibre layer. As it follows the thicker papillomacular bundle, the retinal nerve fibre layer is thicker on the nasal side of the fovea and thinner on the temporal side.

Normally, the posterior cortical vitreous should be only just visible and attached to the macula. If there is a posterior vitreous detachment, it should be seen floating just above this.

The next layer, which appears quite bright on an OCT image, is the retinal nerve fibre layer (RNFL). Then, slightly darker, and posterior to this, is the ganglion cell layer (GCL).

As per Figure 1, the inner plexiform layer, inner nuclear layer, outer plexiform layer, outer nuclear layer, and external limiting membrane, are visualised with differing levels of brightness on OCT, followed broadly by the retinal pigment epithelium (RPE). On a clear OCT image, the choroid can be seen to be comprised of three layers: the choriocapillaris, followed posteriorly by Sattler’s and Haller’s layers. Reaching the junction of the choroid and the beginning of the sclera, the homogenous sclera appears dark.

Vitreomacular traction occurs with vitreal separation and vitreal liquefaction. There should be a visible Weiss ring on fundoscopy, accompanied by symptoms of floaters in your patient.

On an OCT image, vitreomacular traction should be identified by separation of the posterior cortical vitreous from the internal limiting membrane (Figure 2).

In more advanced cases, this traction can cause macular pathology, including foveal distortion, elevation, schisis, oedema or pseudocyst formation3 (Figure 3).

Vitreomacular traction may spontaneously resolve, but may progress into a lamellar or full thickness macular hole (Figure 4).

A macular hole on a retinal photo will appear to be a round or oval shaped, red coloured lesion. When a full thickness macular hole occurs, all retinal layers split from the internal limiting membrane to the retinal pigment epithelium (Figure 4). 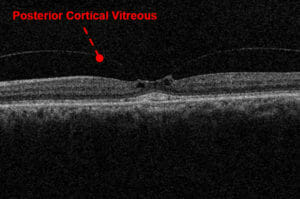 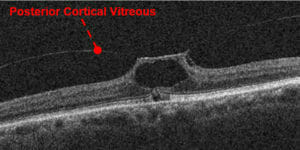 A lamellar hole will show as an irregularity on the surface at the macular region, and appears similar to a full thickness macular hole, however, the outer retinal layers should appear somewhat intact (Figure 5).

Ryan (name changed for anonymity) presented in November 2016 for a routine vision test. This health conscious 48 year old was meticulous about his weight, health and work. He advised that his mild dry eye symptoms were bothersome. He had mild hypertension, and otherwise no ocular, family or medical history.

Cup to disc ratios for both eyes were 0.4, there were signs of mild peripapillary atrophy at his discs, both macula appeared normal, and his eye health was otherwise unremarkable.

When Ryan returned for his annual review the following November, he reported significant vision fluctuation during the preceding few weeks. He had significant dry eye symptoms but was compliant with his dry eye management.

Ryan spoke about his interest in unique health diet treatments and advised that he had almost completed a strict 30 day water only fast and detox diet.

One month later, Ryan had finished his water only detox diet, and was slowly reintroducing his body to solids. His Rx had regressed to the earlier Rx of November 2016:

His best corrected visual acuity was poor in both eyes.

Dilation and OCT showed Ryan’s macula was slightly mottled and raised, consistent with macular telangiectasia in both eyes.

Macular telangiectasia can occur secondary to branch retinal vein occlusion, diabetic retinopathy, carotid artery obstruction, and other causes.8 It can also be idiopathic.9

In the absence of known causes in this case, it is possible that nutritional deprivation played a role in the degeneration of the retinal layers and could have been the triggering mechanism for this to develop – as this is thought to be implicated as a broader mechanism of damage for macular telangiectasia cases.

Thanks to Soojin Nam, Optometrist, for this case study. 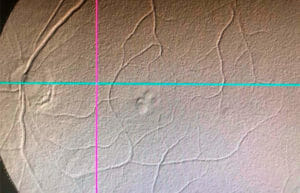 THE VALUE OF OCT IN CLINICAL PRACTICE

Patients with potentially missed pathology can benefit when a more comprehensive investigation with OCT imaging is integrated into their routine eye examination.

With increasing use of OCT in routine optometric practice, we will be more able to detect, diagnose and initiate management of ocular conditions earlier, and in doing so, achieve better patient visual outcomes.

Margaret Lam is an optometrist in theeyecarecompany practices in greater Sydney and Sydney CBD and an Adjunct Senior Lecturer at the School of Optometry and Vision Science at UNSW. She also works as the Head of Optometry Services for George and Matilda Eyecare.

Margaret practises full scope optometry, but with a passionate interest in contact lenses,retail aspects of optometry and successful patient communication and management. She has extensive experience in specialty contact lens fitting in corneal ectasia, keratoconus and orthokeratology and is a past recipient of the Neville Fulthorpe Award for Clinical Excellence.