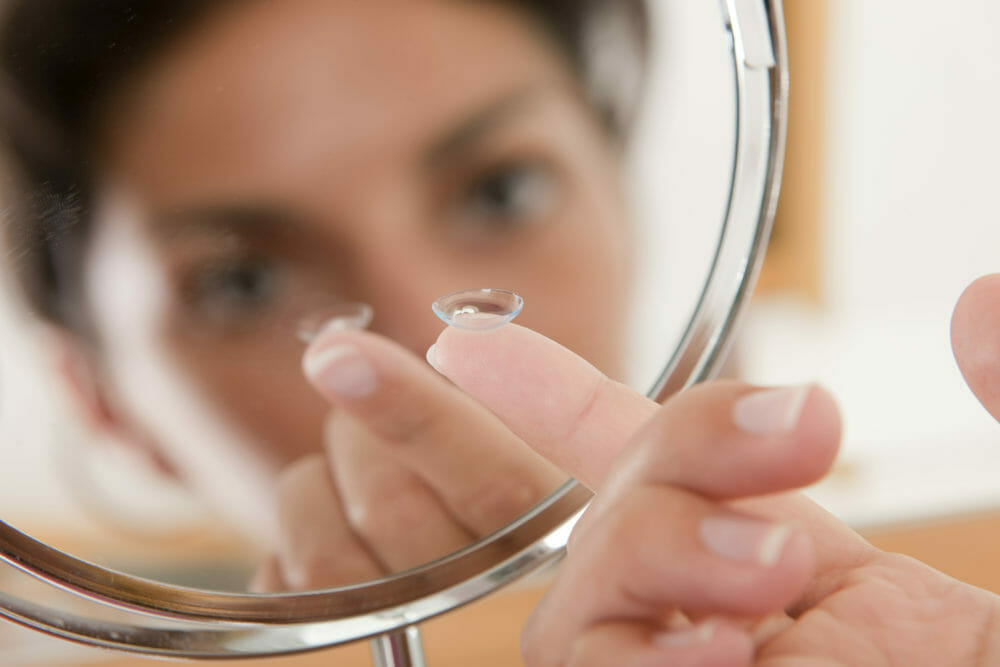 All contact lens wearers should be advised to minimise mixing contact lenses with water and improve standards of personal hygiene in an effort to reduce the risk of Acanthamoeba keratitis, according to a new study led by University of New South Wales’ (UNSW) Scientia Fellow Dr. Nicole Carnt.

Dr. Carnt led the study while on an NHMRC CJ Martin Biomedical Early Career Fellowship at Moorfields Eye Hospital, London before moving to the UNSW. Published this week in the British Journal of Ophthalmology, the study found a threefold increase in the rare, preventable infection Acanthamoeba keratitis since 2011 in South-East England.

Acanthamoeba keratitis is common in nature and is usually found in bodies of water such as lakes, oceans and rivers, as well as domestic tap water, swimming pools, hot tubs, soil and air. The disease causes the cornea to become painful and inflamed, due to infection by Acanthamoeba, a cyst-forming microorganism.

Although quite rare – usually affecting 2.5 in 100,000 contact lens users per year – the infection can severely affect patients.

The most severely affected (a quarter of the total) have less than 25 per cent of vision or become blind following the disease and face prolonged treatment. Overall, 25 per cent of people affected require corneal transplants to treat the disease or restore vision.

While more prevalent in the United Kingdom because of the country’s water supply methods, Dr. Carnt said clinicians in Australia should take the risk of Acanthamoeba Keratitis seriously and advise their contact lens patients accordingly.

“Anyone can be infected, but contact lens users face the highest risk,” said Dr. Carnt.

“Our research showed that the disease is more than three times greater amongst people who reported poor hygiene habits.

The researchers collected incidence data from Moorfields Eye Hospital, from 1985 to 2016. They found an increase dating from 2000–2003, when there were eight to 10 cases per year, to between 36–65 annual cases in the past few years. As Moorfields treats more than one in three cases of the disease in the UK, the researchers expect their findings are relevant to the UK more broadly.

Alongside these findings, they conducted a case-control study of people who wear reusable contact lenses on a daily basis (although the disease is also associated with disposable lenses), comparing those who had a diagnosis of Acanthamoeba keratitis to those who had come in to Moorfields Accident and Emergency for any other reason, from 2011 to 2014.

The case-control study included 63 people with Acanthamoeba keratitis and 213 without. They all completed a questionnaire, from which the researchers found that the risk of developing the disease was more than three times greater amongst people with poor contact lens hygiene, people who did not always wash and dry their hands before handling their lenses, those who used a lens disinfectant product containing Oxipol (now phased out by the manufacturer), and for people who wore their contacts while in swimming pools or hot tubs. Showering and face washing while wearing contact lenses are also likely to be risk factors.

More Needs to Be Done

“People who wear reusable contact lenses need to make sure they thoroughly wash and dry their hands before handling contact lenses, and avoid wearing them while swimming, face washing or bathing.

“Daily disposable lenses, which eliminate the need for contact lens cases or solutions, may be safer and we are currently analysing our data to establish the risk factors for these.”

Dr Carnt is also working with clinicians, contact lens practitioners and contact lens wearers to develop a strategy to reduce the incidence of this severe eye infection.

“Here at UNSW, School of Optometry and Vision Science (SOVS), we are conducting a Randomised Controlled Trial (RCT) to investigate the effect of a ‘no water’ symbol on contact lens paraphernalia on contact lens wearer attitudes, behaviours and storage case contamination.

“This symbol was devised by a patient advocate, Irenie Ekkeshis and has been supported by the CL industry. Preliminary data of the baseline results of this study will be presented at the American Academy of Optometry, San Antonio, US in November. Ongoing studies at SOVS and The School of Psychology, UNSW are investigating novel methods to improve contact lens wearer education and compliance.”

In the meantime, Dr. Carnt said, “It is absolutely imperative that regulators and those working in the optical sector take the findings seriously, and use the recommendations to take immediate and urgent action on prevention.

“Contact lenses are medical devices and should be supplied with warnings regarding safe use.”

The research was conducted in collaboration with colleagues from the Moorfields Eye Hospital, the UCL Institute of Ophthalmology and EpiVision Ophthalmic Epidemiology Consultants.

Allergan To Celebrate 50 Years with Pop Up Exhibition