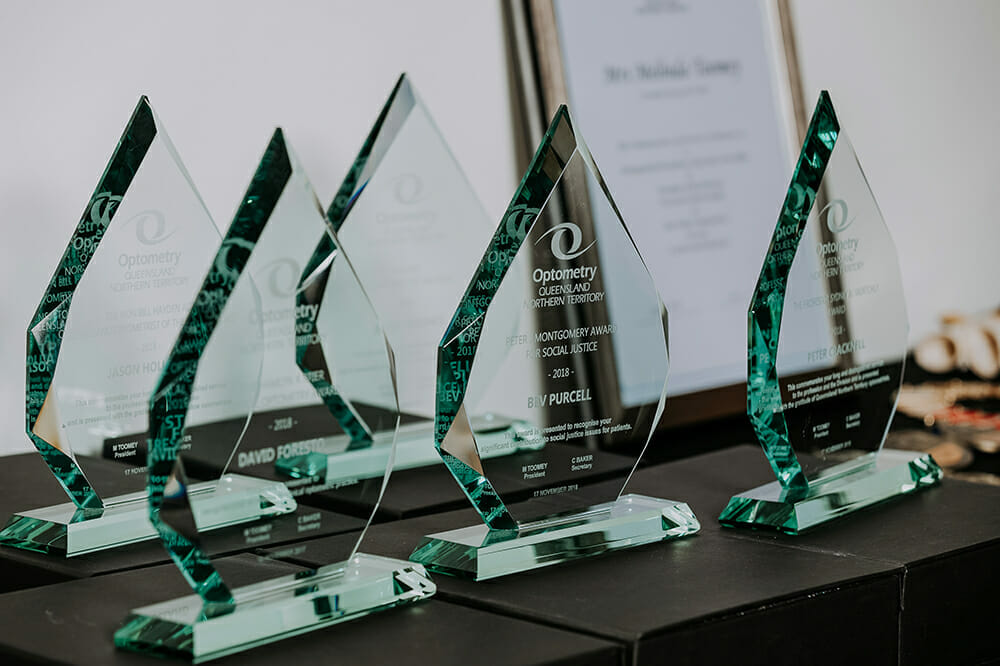 Optometry Queensland /Northern Territory has recognised a number of significant contributors to the profession of eye health at Visionaries, an annual awards evening  this year held at Moda, Hamilton. The event also celebrated 50 years of optometry at Queensland University of Technology, and the successes of recent University graduates.

This year’s award recipients were:

Jason Holland received the Hon. Bill Hayden AC Queensland Optometrist of the Year Award for outstanding contributions to the profession. The award recognises “members of the Division who have worked tirelessly to increase the standing of the profession and enhance the achievements of optometry to serve the community”.

Rohan Hughes received the Young Optometrist of the Year Award. This award is presented to an optometrist “who has graduated in the last five years and who during that period of time has displayed outstanding contributions to the profession”.

Peter Cracknell received the Professor Sydney B K Skertchly Award, which recognises outstanding contribution to optometry by a non-optometrist.

Bev Purcell received the Peter J Montgomery award, which recognises a practitioner who has made a significant contribution to social justice issues for patients.

in optometry, and particularly contact lens fitting, there is almost always a dividend to the patient for every bit of extra skill you have to put in

Improving The Lives of Others

“I tend to just look for hard things to do, that no-one else is doing, that will help patients. I’ve found in optometry, and particularly contact lens fitting, there is almost always a dividend to the patient for every bit of extra skill you have to put in. Whether it’s a vision gain, pain relief or cosmetic improvement, all of these things improve people’s lives.

“I’ve been very lucky to have the support of my wife Liz, who is also an optometrist, to find opportunities to up-skill and to do my best to educate others around the country so they can multiply the benefit to their own patients as well,” said Mr Foresto.

Exhibitors, Speakers, Line Up for O=MEGA19