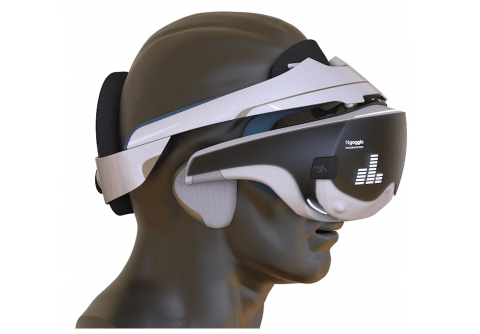 A wearable brain-based device called NGoggle that incorporates virtual reality could help improve glaucoma diagnosis and prevent vision loss. Duke University researchers funded by the National Eye Institute (NEI) have launched a clinical study testing the device in hope that it could decrease the burden of glaucoma.

The device consists of head-mounted virtual reality goggles that use light to stimulate targeted areas in patient’s visual field. NGoggle’s portability means it could potentially be used in a variety of environments such as in an eye care provider’s office, community centre, or at home.

Glaucoma poses a major challenge because its initial impact on vision is imperceptible, starting with subtle deficits in peripheral vision. As it progresses, these deficits grow worse, eventually leading to tunnel vision and irreversible blindness.

“Current methods for glaucoma screening and monitoring are relatively primitive,” said Dr Felipe Medeiros, a study investigator, co-founder of NGoggle, Inc., and a professor of ophthalmology at Duke University School of Medicine.

Standard automated perimetry (SAP), used to monitor glaucoma progression, requires patients to click a button when lights are randomly shown for a brief time in their peripheral vision, however reliability is a drawback. On average, seven years of annual testing would be needed to detect disease progression. Increasing the test frequency to three times annually cuts the time to five years. “That may be an improvement, but there are tremendous difficulties in bringing patients to be tested in clinic several times a year. In the meantime, the opportunity for treatment to preserve vision diminishes considerably,” he said.

In contrast to SAP, the NGoggle objectively assesses peripheral loss of vision without requiring subjective input from the patient. NGoggle gauges brain activity in response to signals received from the eyes. Diminished activity may indicate functional loss from glaucoma.

The virtual reality goggles are integrated with wireless electroencephalography (EEG), a series of electrodes that adhere to the scalp to measure brain activity. Within a few minutes, the NGoggle algorithm captures and analyses enough data to report how well each eye communicates with the brain across the patient’s field of vision.

Dr Medeiros said the device’s virtual reality capabilities can be greatly leveraged – people could be tested for glaucoma as they play a VR-based video game or explore a virtual art gallery for instance. “The possibilities are endless for making it an engaging experience, which would go a long way toward ensuring that people use it and receive the treatment they need,” he said.

In a partnership with Duke University, a study is being conducted to validate the diagnostic accuracy and reproducibility of the device. In addition to comparing NGoggle to SAP, they will look at how well NGoggle discriminates among different stages of disease by comparing its assessments of the neural damage in glaucoma with standard imaging techniques such as optical coherence tomography. The investigators also plan to conduct longitudinal investigations in which patients will be followed over time to validate the ability of the device to detect disease progression. Results will inform an application to the U.S. Food and Drug Administration to market the device.