Joseph Chakman has retired from the Board of ProVision after almost 30 years’ service with the organisation. Mr Chakman was the CEO of Optometry Australia for 35 years and during that time, was instrumental to the establishment of Australian Independent Optometrists, which later became known as ProVision. 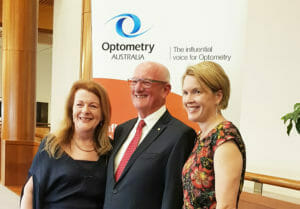 Reflecting on the history of Australian Independent Optometrists, Mr Chakman said its establishment was deemed necessary in response to an emerging presence of corporate optometry.

“The corporate entities had significant advantages over independent optometrists. They had the size and resources to market their outlets, skills in business management and systems that local optometrists did not have. They were able to purchase stock at prices unavailable to independent practices.

“The Council looked for a way to provide independent optometrists with a means to overcome their disadvantages and maximise their advantages over the corporates,” he said.

Mr Chakman explained that the Council decided that rather than discriminate against its corporate members, it would set up a separate organisation for independents. It also decided to differentiate it’s services from those provided by the Optometry Association.

“The Association’s business was of a professional nature – advocacy, standards and education – and the work needed was better suited to an organisation with a different focus and attitude,” said Mr Chakman.

“Council member Brian Layland had been urging the Association to provide marketing, business and group buying facilities to the members, but a mechanism for doing this could not be found. My involvement was in the nascent stages, finding a mechanism and structure to fulfil Brian’s ambitions.”

A steering committee was formed to set up the company, comprising Brian Layland, the late Gerry Wilson from Tasmania and Mr Chakman. The Association provided a loan of AU$50,000 as seed money.

“We quickly set up a Board which comprised Heather Waldron who was the inaugural chair, Andrew Thomas from South Australia, Brian, and Gerry. I was appointed company secretary. Other directors were added soon after. These people did wonderful work, particularly in establishing the culture of the organisation and recruiting members and suppliers,” said Mr Chakman.

While ProVision’s charter has not changed since its inception as Australian Independent Optometrists, Mr Chakman said the services it offers members have evolved remarkably.

“ProVision is so professional now – our efforts in the beginning seem amateurish in comparison. It has a much more refined understanding of what independent optometrists want and how to meet their needs,” explained Mr Chakman.

“We did not know what supply chains were or how to market independent optometrists without resorting to advertising supply chains and we had a rudimentary knowledge of how practices should be managed. We took the attitude that if you were polite to patients and delivered quality care, the business side would look after itself.

“Steven Johnston (current CEO of ProVision) and his team know better than that. The Board, too, is much more professional. They understand its job far better than we did.”

After 30 years with ProVision, Mr. Chakman believes the organisation’s most significant achievement is its contribution to keeping independent optometry alive.

“It has made most, if not all ProVision practices more successful. It has taught its optometrists and staff how to provide better service and has helped introduce systems into practices that have simplified life for the principals. This is exactly what it was set up to do.”

Reflecting on his experience with ProVision, Mr Chakman said, “It has been a wonderful experience having a role in ProVision’s birth and growth. Its birth was difficult, and its teen years were at times troubling, but it has grown into an admirable young adult. It has been a privilege and is a source of great pride to have been involved.”

Mr Chakman will be missed at ProVision. In a report to members, ProVision Chair Ian Bluntish, described Mr Chakman’s contribution to the organisation as “tireless” and said, “His wisdom and counsel as a nonpractitioner has added balance and insight and has been invaluable to the development and stability of the organisation.”

He continues to contribute to optometry as a member of the Board of O NSW/ACT.

Cataract and Refractive Surgery: The Role of the iStent Inject