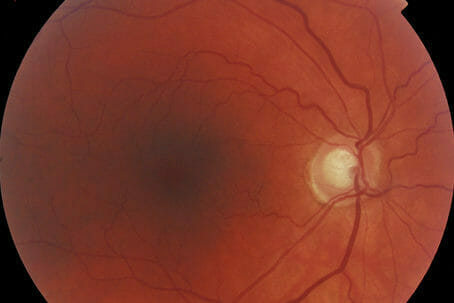 The cases of two non-compliant glaucoma patients demonstrate the need for optometrists to provide continuous education about the disease and its management.

Edward, a 65 year old male psychiatrist, presented to the practice for the first time in July 2015. His last eye examination was years prior. Until recently, his distance vision had been fine unaided, and he relied on readymade magnifiers for near. He had begun noticing difficulty seeing the golf ball and was interested in a distance correction. He had consulted with a glaucoma specialist more than 10 years prior due to elevated intraocular pressures (IOPs), however no treatment was required at the time. He had no significant family ocular history.

Despite being highly educated, and a medical professional, Edward assumed that comfortable eyes with clear vision meant healthy eyes 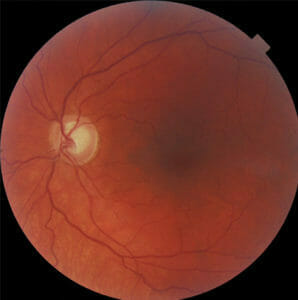 Mydriatic fundus examination revealed cup to disc ratio estimates of CD R 0.7 (figure 1), L 0.8 (Figure 2) with deep cupping in both eyes. There appeared to be superior excavation in the left disc.

Visual field testing revealed an early inferior defect (Figure 3). He was advised to return to his ophthalmologist.

Edward returned in February 2017 reporting no problems with his eyes.

He had not been back to his ophthalmologist as he had been busy.

Edward was advised strongly to return to his ophthalmologist. Edward was initiated on Xalatan treatment, which reduced his IOPs to R 13mmHg, L 14mmHg.

Fortunately, almost two years later, with compliant use of Xalatan nocte, Edward’s glaucoma has been stable. 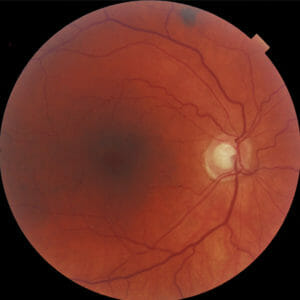 Chris, a male professional, has been attending the practice since 1995, age 28. He was diagnosed with mild myopia at the time, and has a family history of glaucoma (father).

He returned in 1998 and was fitted with daily disposable soft contact lenses. A review was scheduled for retinal examination however he was lost to follow up as he was “too busy”.

Chris returned in September 2005, aged 38, reporting distance blur. His myopia had progressed, and IOP was found to be R 23mmHg, L 29mmHg. Central corneal thickness were R 514 and L 512 microns. Cup to disc ratios were R 0.6 and L 0.7 with deep cupping noted. A glaucoma work up was scheduled, however the patient failed to attend despite stressing the urgency of review.

Chris returned in May 2006 and visual field testing revealed a superior defect in the left eye (Figure 4). He was referred to a glaucoma specialist and initiated on Xalatan eye drops every night. Chris returned in February 2010 as he reported further blur, and further myopic progression was noted. He reported compliant use of his eye drops, and IOP was R and L 16mmHg. 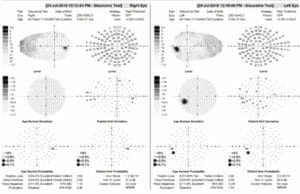 In August 2012, a report from Chris’ ophthalmologist revealed that he had been lost to follow up for the past two years (despite reminders), and had not been using his drops. IOP was elevated to R 28 and L 30mmHg. Cup to disc ratios were R 0.6, L 0.8, and there was now a superior nerve fibre layer defect. Xalatan was recommenced, and the importance of ongoing compliance with treatment and regular appointments was reinforced, as well as the consequences of not adhering.

Chris returned to the practice in October 2016 as he had run out of his prescription for his glaucoma medications. He had not consulted with his glaucoma specialist for more than three years. It was apparent that he had not used his drops for some time. IOPs were R and L 21mmHg. Cup to disc ratios were now R 0.7 (Figure 5) and L 0.8 (Figure 6), and the retinal nerve fibre layer loss had worsened in both eyes as seen by OCT. Visual field testing revealed progression in visual field loss. Xalacom was reinitiated, and fortunately, at his review appointment with his specialist, IOPs were reduced to R 15 and L 14mmHg. Again, the importance of adhering to treatment and attendance at appointments was reinforced, with warnings of the consequence of poor compliance. Glaucoma is a chronic, degenerative condition which causes irreversible damage to the optic nerve, resulting in reduced peripheral vision and eventually, blindness. It is the second leading cause of blindness worldwide, and it is projected by 2020 that 80 million people throughout the world will suffer the disease.1

Often referred to as the ‘silent thief of sight’, glaucoma is normally asymptomatic in the early stages. Consequently, it is estimated that half the people suffering from glaucoma are unaware they have the disease, though this is significantly higher in developing countries with rates as low as 10 per cent of those suffering being aware.1,2 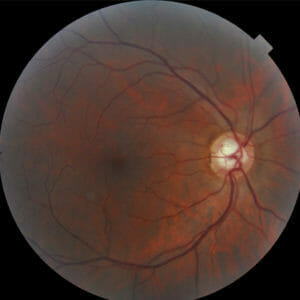 This was the case with our first patient Edward who was completely unaware of the condition. Despite being highly educated, and a medical professional, Edward assumed that comfortable eyes with clear vision meant healthy eyes. He had no family ocular history, and having excellent unaided distance vision for most of his life, did not have routine ocular examinations. He believed his ocular problems, i.e. presbyopia, were entirely resolved by readymade readers. It was only when his latent hyperopia became an issue for distance that he presented for examinations.

Adherence and persistence to follow up and treatment presents a real challenge in chronic, asymptomatic conditions such as glaucoma – it has been reported that 60 per cent of patients will drop out of glaucoma follow up in the first year of review. In the early stages, with subtle disease progression, patients may be unmotivated to present for follow up due to the perception there is nothing wrong. Other common reasons for not attending review include being too busy; difficulty making appointments, getting time off work or to the clinic, advanced age, and time spent at the clinic.3 Most patients do not enjoy being dilated and I’m yet to meet someone who likes performing a visual field exam.

Those most likely to drop out are glaucoma suspects, people with mild disease, younger, males, those less educated, and patients who do not perceive the seriousness of the condition.4

About half of diagnosed patients have been reported to be non-adherent to glaucoma therapeutics. Commonly cited reasons for non-compliance with therapy include forgetfulness, cost of medication, medication side effects, inability to instil eye drops, and inconvenient dosing.5

This was the case for our second patient, Chris, who being 38 at the age of diagnosis and asymptomatic, did not believe that his condition was serious and felt he was too busy to attend the review appointments. Fortunately, Chris had a symptomatic ocular condition (i.e. progressive myopia) which brought him back for examinations, otherwise he could have experienced far greater visual loss.

Glaucoma is often termed the ‘silent thief of sight’ as patients are only symptomatic when the disease is already very advanced, hence the importance of regular eye examinations to detect for and manage the disease. Early intervention can prevent irreversible damage, preserving sight for the individual. As eye care professionals, we play an important role in the diagnosis and management of glaucoma, and also in advocacy and education. It is important to stress the importance of adhering to follow up and therapy and to educate patients about the nature of disease, with emphasis on the irreversible damage it can cause. Patients should also be strongly encouraged to have family members tested.

Patients’ names have been changed.

Jessica Chi is the director of Eyetech Optometrists, an independent speciality contact lens practice in Melbourne. She is the current Victorian, and a past national president of the Cornea and Contact Lens Society, and an invited speaker at meetings throughout Australia and beyond. She is a clinical supervisor at the University of Melbourne, a member of Optometry Victoria Optometric Sector Advisory Group and a Fellow of the Australian College of Optometry and the British Contact Lens Association. Ms Chi writes ‘mipatient’ on alternate months with Margaret Lam.