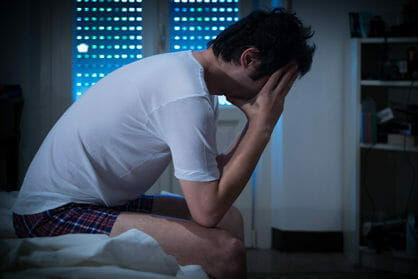 Low tension glaucoma (LTG) is a diagnosis of exclusion that is difficult to make and especially difficult in myopic patients with ‘myopic discs’, or those who have ocular co-morbidity. Being aware of specific systemic risk factors may allow for earlier diagnosis. 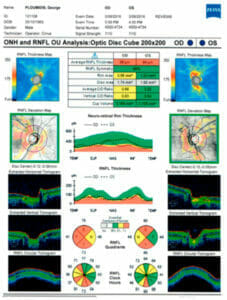 Figure 1. Significant RNFL thinning, greater in the right eye than the left

In 2016, 49 year old optometrist George Ploumidis elected to have an ophthalmic exam and ocular coherence tomography to assess his ocular health in view of his complex ophthalmic history: 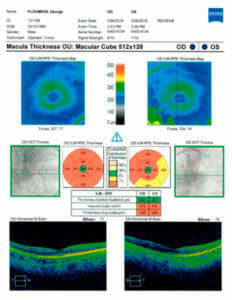 Figure 2. Significant thinning of the macular GCL, again greater in the right eye than the left

Swedish Interactive Testing Algorithm (SITA) fast perimetry (Figure 4) demonstrated field loss, which was greater in the right eye than the left, correlating with the above ganglion cell layer (GCL) findings. The field loss was close to fixation in the right eye. This defect may also be due to previous laser, however the laser had been performed more peripherally. These fields highlight the difficulty in making a definite diagnosis of glaucoma in a myopic eye with previous laser in a patient with significant known risk factors for LTG.

Best corrected vision was 6/12+2 and 6/9 in the right and left eyes respectively, with no improvement with pinhole in either eye. Anterior segments were normal and gonioscopy showed open angles. Cup to disc ratios were measured by OCT as right 0.66 and left 0.52. Intraocular pressure (IOP) was 14mmHg in the right eye and 13mmHg in the left, and central corneal thickness 536 microns in the right eye and 520 microns in the left. An MRI scan of the orbit and brain was normal.

Weighing Up the Findings

Various findings had to be weighed in order to determine whether a diagnosis of normal tension glaucoma could be entertained or not. 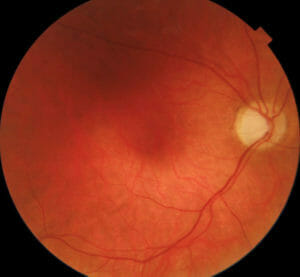 The visual field defects anticipated in LTG are thought by some, to be deeper and closer to fixation than those otherwise found in glaucoma. If there is a visual field defect in one eye, then there may also be a 40 per cent chance of a defect developing in the other eye in five years.

A diagnosis of LTG was tentatively made and treatment with a prostaglandin analogue was commenced, lowering intraocular pressures (IOPs) to 11mmHg in both eyes. An alternative approach may have been to monitor the fields for progression as 40 per cent of patients with LTG do not deteriorate after five years with follow up. 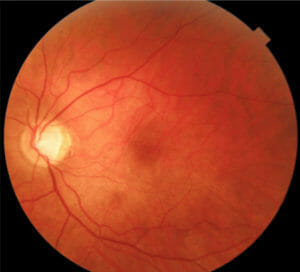 The decision to treat was made after a discussion weighing the perceived benefits and risks associated with ongoing medical treatment, especially taking into account both the obstructive sleep apnoea and ocular vascular disease.

Both blood pressure and cholesterol were assessed as being within normal limits and a further sleep study confirmed that the current treatment setting of the constant positive airway pressure (CPAP) was well within therapeutic targets. Pulmonary vein isolation, a surgical form of ablative surgery, was undertaken in June 2018, which effectively treated the existing atrial fibrillation.

Low tension glaucoma (LTG) is a condition comprising the classical glaucomatous features of disc and field changes in the presence of open angles and IOPs within the statistically normal range.1 In the absence of elevated IOPs as the recognised modifiable risk factor, vascular and pathogenic mechanisms other than IOP effects have been postulated, but the exact cause remains unknown.2

The Beaver Dam Eye Study previously identified the prevalence of LTG within a population as approximately 0.2 per cent of patients age 43 to 54 years, rising to 1.6 per cent in patients over 75 years of age.3 Vascular risk factors such as migraine, nocturnal hypotension, and disc haemorrhage are also associated with LTG. 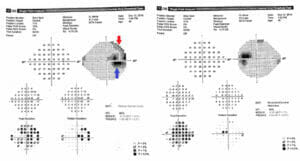 With respect to the incidence of LTG within the OSA literature, the presence of OSA appears to represent a significant risk factor with incidence rates between 5.7 per cent and 15.4 per cent across multiple studies.6-8 Furthermore, most studies suggest an additional correlation between LTG and an increasing severity of sleep apnoea. Against this however, in a large review of a medical records database, Stein and co-authors found no correlation between OSA and glaucoma. In that study there were confounding factors which may have underrepresented any connection.9

The ocular changes linked to OSA that lead to the development of glaucomatous disease include:

The clinical significance of these changes are multifactorial and hence differ between individuals. Measures such as retinal nerve fibre layer (RNFL) thickness and mean deviations in perimetry have been shown to correlate directly with OSA and AHI/RD. The literature also suggests a link between RDI and untreated IOP, field loss and the eventual diagnosis of glaucoma.13 There is a statistically higher mean deviation and pattern standard deviation in perimetry in moderate to severe OSA patients when compared to age matched patients.14

New knowledge about the effects of sleep apnoea on a patient’s ocular health should guide the clinician to suspect and look for a current or past history of OSA. 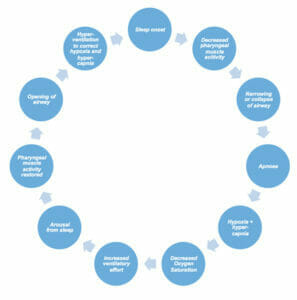 A positive history should initiate OCT and perimetry testing to document the presence of physical nerve changes and field loss.

A management plan with documented goals must be communicated to the patient’s general practitioner to allow for collaborative care.

In our case report, other systemic vasculopathic health issues may have predisposed the right eye in particular to glaucomatous changes. Indeed, the medical retina specialist who treated the BRVO in the right eye suggested increased vigilance for ocular comorbidity at the time of diagnosis.

Similarly, patients exhibiting RNFL and field loss akin to the above case should be referred to the patient’s general practitioner for investigation for OSA. Ongoing treatment with a prostaglandin analogue, regular ophthalmological reviews, and managing cardiovascular risk factors are at the core of successful management in this case.

George Ploumidis is a locum optometrist and an optometry committee member of Glaucoma Australia. He completed his Bachelor of Optometry and Certificate 1 and 2 in low vision at University of Melbourne, and a Masters of Health Administration at Monash University.

Dr Lewis Levitz practices from the Vision Eye institute in Camberwell, Blackburn South and Coburg, Melbourne. He has reviewed articles on cataract surgery for the Journal of Cataract and Refractive Surgery, Clinical and Experimental Ophthalmology and the Asia Pacific Journal of Ophthalmology. He also presents annual papers and audits at the Australian Society of Cataract and Refractive surgical meetings. He has an interest in oculoplastic surgery having completed a Fellowship in Cardiff, Wales.