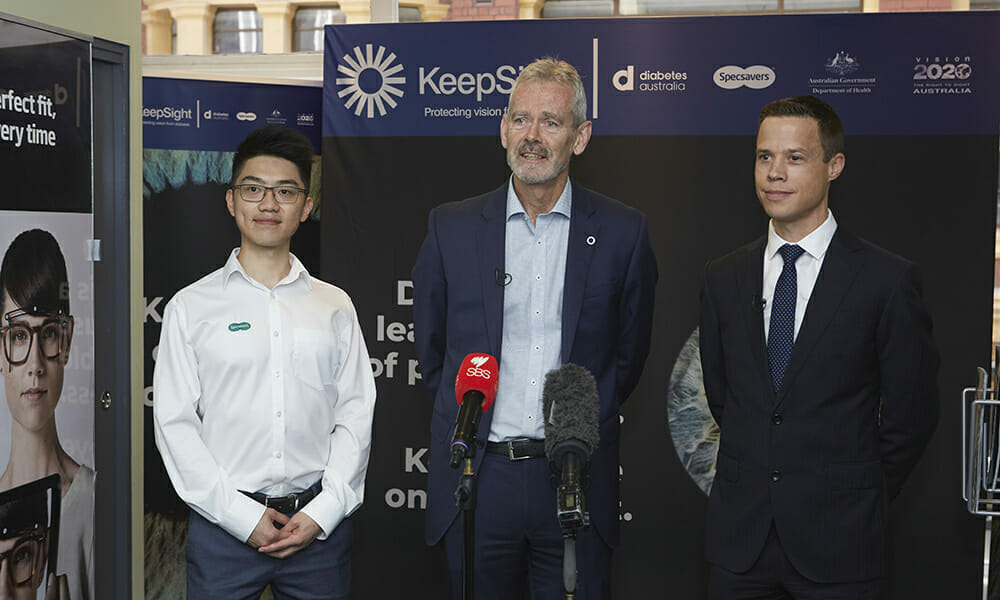 The KeepSight national eye screening program has been formally launched to the public at Specsavers Little Collins Street in Melbourne.

The program, which aims to ensure people with diabetes protect their vision, was attended by representatives from Diabetes Australia, the Centre for Eye Research Australia and Specsavers.

Specsavers has committed AU$1 million a year for five years to help KeepSight communicate the importance of regular, Medicare-funded eye tests to people with diabetes, and its network of more than 950 Australian optometrists are now signed up to the program.

Speaking at the launch event, Diabetes Australia CEO Professor Greg Johnson said diabetes was a leading cause of preventable blindness in working-age Australians, yet with regular eye checks, most vision loss is preventable. He urged people with diabetes to sign up to KeepSight, which is designed to make it easier for people to remember to have regular eye checks through a system of alerts.

KeepSight is a once in a generation opportunity to significantly reduce the rates of diabetes-related vision loss and blindness across Australia.

“Every person with diabetes is at risk of eye damage and vision loss because the diabetes can damage the blood vessels in the eye,” said Professor Johnson. “1.3 million Australians have diabetes and we think that about half, or around 630,000 people, aren’t getting their eyes checked, and this means eye damage is often identified too late when treatment is less effective and more costly. Early detection of problems and early treatment is the key to preventing vision loss and blindness.

“Diabetes is a complex condition and people with diabetes need to have a range of regular health checks and tests to manage their condition. It can be time-consuming and sometimes things get overlooked. Many people with diabetes are not even aware they need to have their eyes checked. Once people are registered with KeepSight they’ll receive reminders and prompts to have regular diabetes eye checks.

“If we detect problems early then people can get early treatment, damage can be prevented and they can keep their sight.”

The launch event marks the start of a new national awareness campaign about the risk of eye damage and blindness caused by diabetes, and the importance of registering with KeepSight to help reduce the risk. The national campaign will use television, radio, and digital advertising, and also target three key regions with high rates of diabetes including western Sydney, the Sunshine Coast and southeast Melbourne.

Associate Professor Peter van Wijngaarden, Deputy Director of the Centre for Eye Research Australia, said KeepSight was the missing link in Australia’s diabetes health system. “We have some of the world’s best eye care providers and an excellent health service, but people are still slipping through the cracks,” he said.

“The thinking behind KeepSight is already proven. The United Kingdom implemented a similar program and, for the first time in 50 years, diabetes is no longer the leading cause of blindness in working age adults there. We want to achieve that in Australia. KeepSight is a once-in-a-generation opportunity to significantly reduce the rates of diabetes-related vision loss and blindness across Australia.”

Specsavers Little Collins Street Optometry Partner Patrick Mac, who hosted the launch event on Sunday 24 March, said: “The whole Specsavers team is excited to be a part of the KeepSight initiative. The statistics on diabetes-related eye disease are finally becoming well understood, and our increasing focus on the condition is already having a measurable impact. By encouraging people with diabetes to have their eyes checked regularly, KeepSight will ensure my team, along with my colleagues in every Specsavers practice around Australia, has a greater opportunity to identify those with diabetes-related eye disease. We will then be able to refer them on for support and treatment when necessary.”

The new program has widespread support from leading diabetes and eye health groups, and is funded with the support of Specsavers, the Australian Government, Vision 2020 Australia, Oculo, Bayer and Novartis.