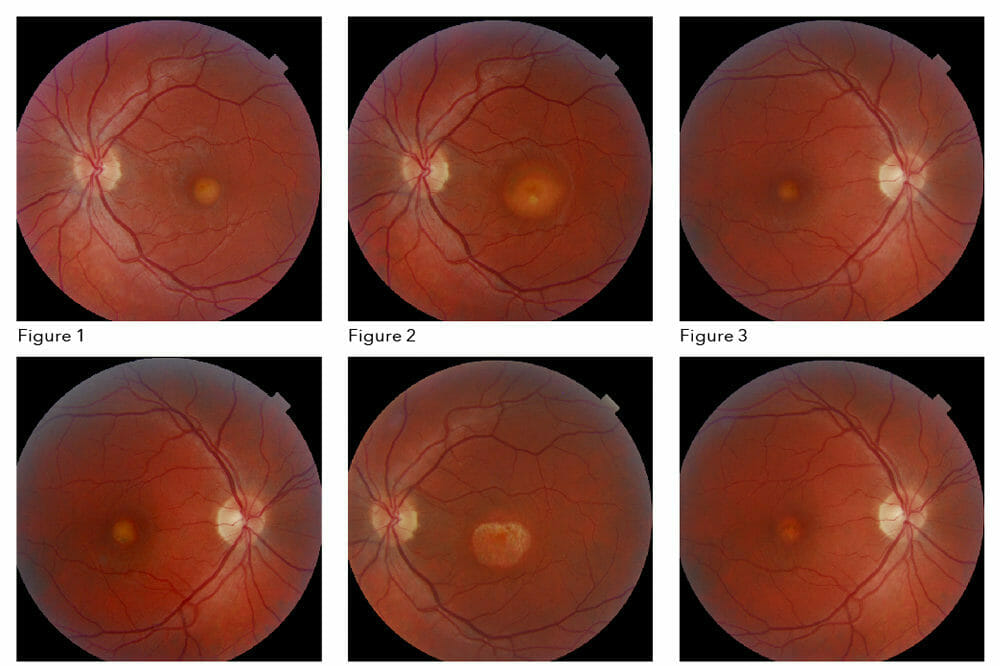 Best disease and adult onset foveomacular vitelliform dystrophy have similar presentations. While no treatment is available, careful monitoring is necessary to detect the onset of choroidal neovascularisation.

Stephen first presented aged 32 for a routine examination. He was wearing spectacles for mild myopic astigmatism and had a family history of glaucoma (father).

Unfortunately there is no treatment for either BVMD or AFVB, aside from treating any choroidal neovascularisation 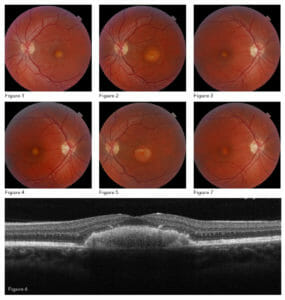 Fundus examination revealed a round yellow raised vitelliform lesion in the left eye (shaped like an egg yolk), measuring two thirds of a disc diameter (Figure 1).

Stephen returned four years later, aged 36. The size of the lesion had increased to one and a half disc diameters, and appeared more raised (Figure 2). There was also a raised yellow lesion in the right eye (Figure 3) measuring one third of a disc diameter. Visual acuities were R 6/6+ and L 6/7.5-.

Two years later, Stephen returned, aged 38, and the right lesion had pigment mottling in the centre (Figure 4). The yellow material at the left macula was broken up, resembling a ‘scrambled egg’ appearance (Figure 5). Optical coherence tomography revealed broken up vitelliform material at the macula (Figure 6). Visual acuities were reduced to R 6/9+ and L 6/24+.

Two further years passed. Aged 40, Stephen’s left macula appeared flat, and the vitelliform material had withdrawn in both right (Figure 7) and left eyes (Figure 8). There was a large area of atrophy where the vitelliform lesion had also been seen on the optical coherence tomography (Figure 9 and 10). Visual acuities were now R 6/9 and L 6/38=.

Stephen’s vitelliform lesions in both maculas are likely to be a result of either best vitelliform macular dystrophy (BVMD) or adult onset foveomacular vitelliform dystrophy (AFVD). However, his disease manifested in ways that were atypical of both conditions.

BVMD is a bilateral, progressive disease of the macula, presenting with vitelliform lesions at the macula, which appear yellow and raised. The disease evolves through the following stages;1

In some cases, choroidal neovascularisation (CNV) may occur.

BVMD is the second most common form of juvenile macular degeneration and makes up approximately 1% of all macular degeneration. The median time of onset of visual symptoms is in the early 30s, however this onset has been reported from age two to 78.1,2

AFVD is a heterogeneous maculopathy that presents similar to BVMD, and is also characterised by bilateral but asymmetric yellow, round, elevated subretinal vitelliform macular lesions, often with pigmentation in the centre. It is often misdiagnosed due to its widely varied presentations and rare nature. It differs from BVMD in that the lesions tend to be smaller (normally smaller than one disc diameter) and do not demonstrate evolutionary changes.3

The age of onset is later in life – normally the fourth to sixth decades, and vision loss is normally gradual and less significant than in BVMD. In BVMD, the EOG is highly abnormal, even in the early stages of the disease, however in AFVD, EOG is typically normal or slightly abnormal.3

Stephen was diagnosed with BVMD as his lesions showed that evolutionally, changes were larger and resulted in significant atrophy and visual loss, which is characteristic of BVMD.

Typically, the age of onset is in the first two decades of life, however there is variability between the onset of visual symptoms, even amongst members of the same family. Stephen’s onset of signs was later than typically expected in life, however early changes could have been present but undetected.2

BVMD normally follows an autosomal dominant pattern of inheritance, however sporadic cases such as Stephen’s may occur when there is no known family history.2 The mutations found in BVMD are found on the BEST1 gene (previously the VMD2 gene) which is located on chromosome 11q13.1 Given its pattern of inheritance, Stephen’s offspring have a one in two chance of inheriting the disease, making genetic counselling important for patients with this condition.

Unfortunately there is no treatment for either BVMD or AFVB, aside from treating any choroidal neovascularisation (CNV). Anti-vascular endothelial growth factor injections have been shown to be useful in these cases.1,3 Careful monitoring of these patients by both practitioner and patient is required for early detection of any CNV, and patients should be advised to test their vision at home using an Amsler grid.

The patient’s name has been changed.

Jessica Chi is the director of Eyetech Optometrists, an independent speciality contact lens practice in Melbourne. She is the current Victorian, and a past national president of the Cornea and Contact Lens Society, and an invited speaker at meetings throughout Australia and beyond. She is a clinical supervisor at the University of Melbourne, a member of Optometry Victoria Optometric Sector Advisory Group and a Fellow of the Australian College of Optometry and the British Contact Lens Association. Ms Chi writes ‘mipatient’ on alternate months with Margaret Lam.