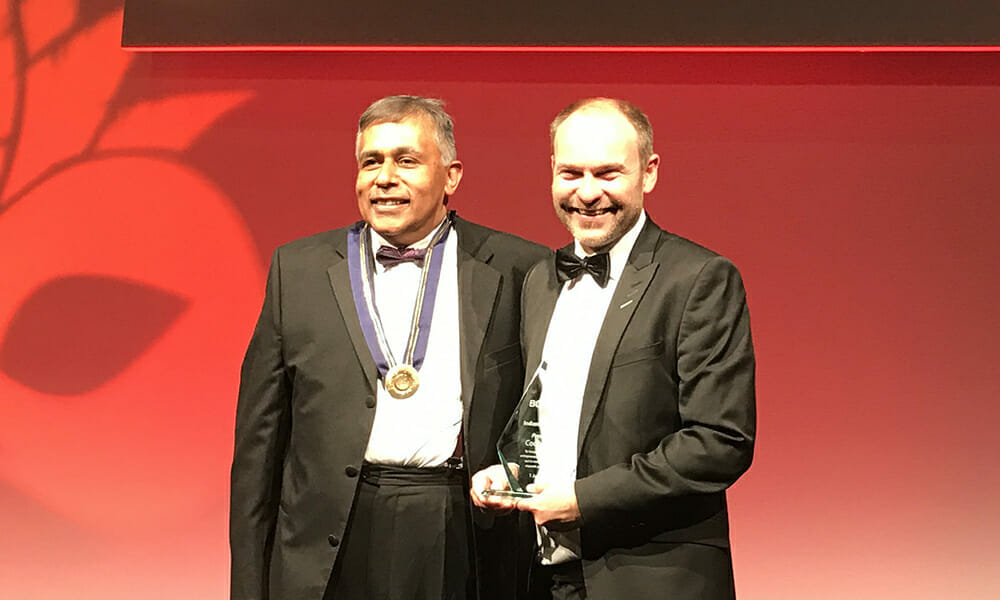 A trio of myopia management visionaries has been honoured with the prestigious British Contact Lens Association (BCLA) Industry Award for their work developing, researching and commercialising the innovative CooperVision MiSight 1 day contact lens. John Phillips, Stuart Cockerill and Paul Chamberlain were recognised at the BCLA Clinical Conference & Exhibition closing gala dinner, selected from a field of finalists who have all made immeasurable contributions to the field.

Myopia is projected to affect the vision and ocular health of approximately five billion people by 2050, more than doubling today’s numbers.1 The rising prevalence of this condition, also known as nearsightedness or short-sightedness, is sparking the need to go beyond solely providing vision correction, to also deliver accessible, effective methods to slow the progression of myopia in children.

The foresight and years of effort from John, Stuart and Paul are well deserving of recognition from their peers and the industry

These factors led the three pioneers to each play a substantial role in developing and commercialising the MiSight 1 day contact lens,2 which is now worn by more than 10,000 children around the world.

The story begins at the University of Auckland (New Zealand), where researcher John Phillips became aware of early experiments demonstrating that myopic defocus imposed on the retina slowed eye growth. He initiated human studies of monovision spectacle wear in children, which demonstrated that myopic defocus could also slow the rate of myopia progression in children. Mr Phillips translated these early experimental optical designs into a dual-focus contact lens with two simultaneous image planes: one focused on the retina to address visual acuity and the other deliberately creating simultaneous myopic defocus on the retina to slow myopia progression.

Mr Phillips’ firm belief in his technology, just as the world was starting to awaken to the increasing prevalence of myopia, led to the adoption of dual-focus technology by CooperVision. Now internationally recognised as a pioneer in the development of optical designs to slow myopic progression, he continues to work on this global challenge as Principal Investigator at the Auckland Myopia Laboratory and as Senior Lecturer in the School of Optometry and Vision Science at The University of Auckland.

In 2009, MiSight 1 day was the first contact lens introduced for myopia management.3 At the time, the pathological consequences of myopia were less well established. CooperVision’s Stuart Cockerill had the foresight to initiate the first industry-supported three-year study4 to assess the efficacy of the dual-focus design across three continents, with sites in Canada, Singapore, the United Kingdom and Portugal. This was critical to illustrate the benefits of myopia management to the ophthalmic profession, as well as to align commercial interests on the importance of myopia management for long-term paediatric vision and health.

The study is becoming recognised as a benchmark in its class, with its randomised, controlled, parallel, prospective design. Now in its sixth year, it is the longest continuous monitoring of soft contact lens wearers undertaken in children. The strong, robust evidence base derived from the clinical study continues to inform eye care professionals (ECPs) who are participating in myopia management. Mr Cockerill is now Head of Global Commercial Operations, Specialty EyeCare, CooperVision.

The third phase of the groundbreaking product’s evolution has been spearheaded by Paul Chamberlain as CooperVision’s research and development lead for myopia management programs. He directed the analysis of the MiSight 1 day three year study, ensuring a rigorous approach with data that was robust and generalisable to the targeted patient population, as well as suitability to support key regulatory pathways. He presented five year results in Manchester during the BCLA Conference.4 Understanding that the interest in this data would be without precedent, his efforts certified that the results and their presentation would withstand the warranted scrutiny.

Mr Chamberlain has also been instrumental in using the study data to translate the innovative technology into everyday practice, highlighting information and insights to assist implementation by ECPs. His work has led to a deeper understanding about the optical principles that underpin dual-focus technology. He is lead author on a forthcoming peer review publication describing the three year results as well as leading the continuation of the original study to prove continued efficacy, later treatment benefit and the understanding of the post-treatment effect from an optical intervention approach. Mr Chamberlain currently serves as Director, Research Programs, CooperVision.

“Myopia management has been described as the ‘next contact lens revolution’ –something more evident than ever at this year’s BCLA Conference. However, it takes inspiration, vision and dedication to integrate new technology into a commercially viable approach,” said James Gardner, Vice President, Global Myopia Management for CooperVision. “The foresight and years of effort from John, Stuart and Paul are well deserving of recognition from their peers and the industry. Yet they’ll be the first to tell you the honour is not about them – it’s about the thousands of children who are benefiting from that work every day. It’s this attitude that gives us hope that we can truly make an impact, working alongside ECPs to take on myopia.”

Joe Tanner is the Professional Services Manager at CooperVision.