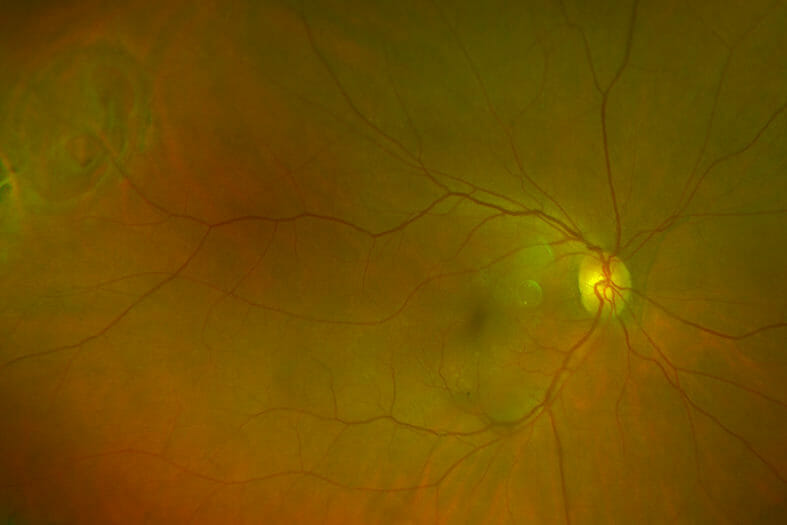 We know that acute symptoms of posterior vitreous detachment can be related to a number of sequelae including Weiss ring formation, retinal tears or vitreomacular traction… so when a patient presents with an apparently uncomplicated symptomatic PVD at the baseline examination, what is the best path forward?

As primary eye care practitioners, we recognise that a panicked ‘google-educated’ patient, noticing recent-onset flashes or floaters, requires a prompt dilated fundus examination. Our current approach of squeezing in the symptomatic patient at 4pm on Friday afternoon is justified when we consider that up to 50% of symptomatic eyes with an untreated retinal tear will develop a retinal detachment.1,2,3

But what are the chances that a patient, initially diagnosed with an uncomplicated acute PVD at the baseline examination, will develop a retinal tear in the near future? Is it necessary to re-examine them in six weeks as we were taught as an undergraduate? Do our experiences in general practice align with the research?

Posterior vitreous detachment (PVD) is considered a normal age-related process where there is separation of the posterior vitreous cortex from the internal limiting membrane of the retina. It begins posteriorly at the macula, and typically progresses anteriorly to the vitreous base. The acute symptoms of PVD most frequently occur in the final stage, when the posterior vitreous pulls away from the optic disc, sometimes involving formation of a Weiss ring. This process typically takes years from onset to completion.4 Symptoms may also occur at earlier stages of PVD, and provide clues about the presence of sequelae, such as retinal holes, tears or detachments, associated with the PVD.

SIGNS AND SYMPTOMS OF PVD

Symptoms of photopsia are caused by tractional forces on the retina. Floaters result from vitreal opacities, made up of either condensed collagen, or more sinister substances such as blood or pigment, casting shadows on the retina.

Between 8.2% to 27.1% of symptomatic PVDs have been found to be associated with retinal breaks or detachments.5-10 This risk is further increased with the discovery of blood or pigment in the vitreous.10 Other signs and symptoms, which may increase the risk of retinal tears, include a subjective decrease in vision,5,10 multiple floaters, or a perception of a curtain or cloud in one’s visual field.11 The presence of abnormal vitreoretinal disorders, such as lattice degeneration or vitreoretinal tufts, also increases the risk of retinal detachment associated with PVD.12

Patients that present within the first 24 hours of symptoms have a higher incidence of retinal tears; this is believed to be because retinal tears may be associated with more acute, visually bothersome symptoms that prompt urgent attention to be sought.10

When no retinal pathology is found at the baseline examination in a patient with symptomatic PVD, the risk of discovering new retinal breaks at follow up is considered to be low, calculated at an average of 1.8% across multiple studies.9 Some studies have argued that in the absence of vitreous haemorrhage or tears at the initial examination, follow up is unnecessary unless symptoms worsen.13 Conversely, it has been suggested that delayed retinal tears may not be associated with a change in symptoms.11

So how do we decide when a follow up examination is necessary? While the reported rate of new tears is low, it should be remembered that most studies involved consultations performed by ophthalmologists in hospital clinics incorporating scleral indentation at the initial consultation. As a result, these studies may have had a higher sensitivity of detection compared with techniques used in standard optometric practice. A follow up examination provides an opportunity to detect cases of new tears as well as tears that may have been missed at the initial visit. It also provides the patient extra peace of mind and screens those patients who may not be good at articulating or identifying changes in their vision. Patients with haemorrhage or pigment in the vitreous, or patients presenting with new symptoms, a large number of floaters, or visual reduction, are at higher risk of retinal breaks and referral should be considered. Change in symptoms prior to six week follow up should also prompt immediate review.

As busy clinicians, we need to balance the allocation of our finite time and resources while keeping in mind the potentially visually devastating outcomes of a missed retinal tear. Detailed history taking, thorough clinical examination and careful consideration of relevant signs and symptoms at baseline and six week follow up will maximise your diagnostic potential in these challenging cases.

Rebecca Tobias BOptom (Hons), MOptom, GradCertOcTher has worked at CFEH since 2011, in a position that has allowed her to advance her clinical expertise as well as engage in research and education endeavours. Throughout her time at the Centre, Rebecca has taken a particular interest in both macula and vitreous pathologies.

Gonzalo Jacome BOptom, GradCertOcTher worked in full scope private practice for many years and brought a wealth of experience to the CFEH when he commenced in 2016. His professional interests include diabetic eye disease, dry eye disease, glaucoma detection, management and improving access to diagnostic imaging and management services for the general community.

For references please go to www.mivision.com.au