Optical Dispensing Moves Ahead to Create a Stronger Association 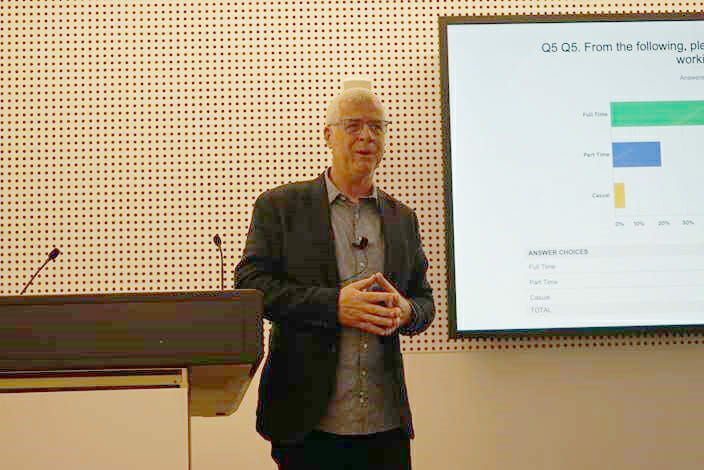 At a forum conducted at O=MEGA19, industry members voiced their concern about the current well-being of the sector, and expressed interest in furthering education standards and professional respect for those within in.

The proposed stronger, more active association was applauded by attending optical dispensers and various sector members who attended the forum

The forum was moderated by Paul Clarke, a past president of the International Opticians Association, having been encouraged by several members of the eye health sector.

Mr Clarke presented a brief history of optical dispensing in Australia, and described the current sector as “not going wonderfully well” and “an unsophisticated profession in Australia”.

He said it was important not to apportion blame for this, but rather to find a way to move on.

Highlighting the importance of the occupation to patient eye health and the practise of optometry, Mr Clarke said “I think we’re becoming more significant because there is a much more complex need for glasses – we’re selling lens types never available before, people are engaged in much more close up work, and I think it will be a long time before technology is able to take our jobs.”

Mr Clarke presented findings from a survey conducted in the lead up to the forum, which generated 216 responses from eye health sector members.

The overwhelming feedback from the survey was that people were interested in being part of an association, and want to participate in a recognised program of professional education. The majority felt they were not getting enough benefit from the current optical dispensers association which is run in a voluntary capacity.

Breaking the Responses Down

When asked whether they would be happy to volunteer to help advance an active association for optical dispensers, 135 respondents said yes and 81 said no.

Mr Clarke said based on his experience, interest in volunteering assistance was outstandingly positive, however he acknowledged that to ensure an active and sustainable association, it would be necessary to engage a person to run the association.

He announced that Ron Baroni, who has 20 years’ experience in the eye health sector and recently left Optometry Giving Sight, had agreed to steer the formation of the Association in a voluntary capacity. All going well, it is anticipated that this role will become paid in the future.

The proposed stronger, more active association was applauded by attending optical dispensers and various sector members who attended the forum.

“Dispensing can’t do without optometry and optometry can’t do without dispensing – we are very supportive of what’s happening today and I’m thrilled to see such a collection of great minds and thinkers,” he said.
He said the OA board would support the formation of a stronger association by providing resources, intelligence, data, and any required assistance. Reflecting on the recent launch of Optometry Australia’s 2040 project, which sets out a future direction for the next 20 years, he cautioned the need for an optical dispensers association to do the same.

“The primary operation of an association is to strategise… to think progressively, think far ahead, what’s it going to look like in 20 years’ time?”

One attendee suggested a stronger association should move to initiate a change to the Federal government act governing the occupation, so that optical dispensers can be called opticians, in line with their international counterparts.

Philip Rose from Eyecare Plus noted the generational change happening in eye care and said it was necessary to attract “smart young people – to bring them out of retail and fashion and train them”.

Steve Daras, teacher, optical dispenser and course coordinator for TAFE Digital reflected on industry changes and deregulation which have dramatically reduced investment and interest in training optical dispensers. He said education and training is needed and that the workplace is not equipped to train dispensers as “it does not have the time, expertise or resources”.

“No-one should be able to see a customer until they have done this,” he said.

Optical dispensers who are interested in being part of a stronger more active association are invited to submit their details to the President of the Australian Dispensing Optician’s Association, Amelia Roberts (email adoa.ltd@outlook.com). All details will be forwarded to Ron Baroni.