The Low Down on High Altitude Retinopathy A spontaneous retinal haemorrhage can be frightening for a patient, at any time. Determining the cause will direct the treatment.

Tara, a 35 year old female commercial pilot, presented to the practice having just returned from two weeks hiking Everest Base Camp. She had noted blurred right vision at the peak of her hike, which was 5,400m above sea level. Days later, she had been seen at an ophthalmology department in Bangkok where she had been diagnosed with retinal haemorrhages in both eyes, affecting the macula in the right. Her blood pressure, when measured at the Bangkok hospital, was 145/80. Tara suffers from moderately high myopia, which she manages with spectacles and contact lenses. 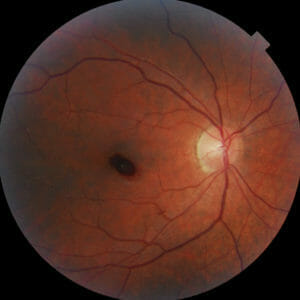 At presentation, a very distraught Tara described the vision in her right eye as blurry – as if looking through red cellophane. Vision with her spectacles, of prescription R -5.75DS and L 5.25DS, was R 6/15= and L 6/4.8. 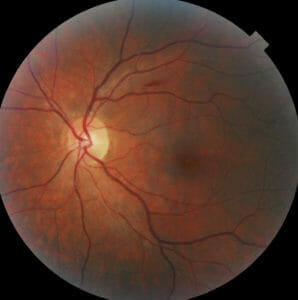 Tara returned two weeks later, reporting a slight improvement in vision. Vision with her spectacles was R 6/12-. Fundus examination revealed the haematoma had reduced in size and pigmentation (Figure 5). The flame haemorrhage in the left eye had completely resolved. OCT revealed the lesion was less raised – now 373 microns (Figure 6).

One month after initial presentation, Tara returned, reporting a dramatic improvement in her symptoms. Vision with her spectacles was now R 6/7.5. Fundus examination revealed that the haematoma had significantly reduced in pigmentation and size (Figure 7), which was confirmed with OCT (Figure 8). 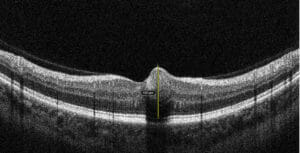 Altitude illness, which includes high altitude retinopathy (HAR), is a common phenomenon experienced by nonacclimatised individuals at high altitudes, as a result of hypobaric hypoxia. 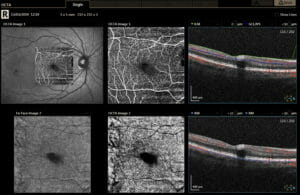 Retinal haemorrhages experienced from HAR are thought to occur from systemic hypoxia. This causes an inadequate autoregulatory response of the retinal circulation, increasing venous pressure and blood viscosity, which results in damage to the blood vessel walls and subsequent leaky blood vessels.

A more common delayed consequence of hypobaric hypoxia than previously thought, one study found retinal haemorrhages occurred in 79% of their cohort of high altitude climbers.3 However they often go undetected and undiagnosed because, like most retinal haemorrhages, HAR does not occur at the macula. 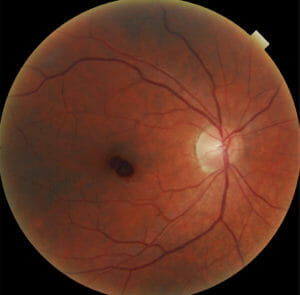 The consequences of HAR depend on the extent and location of the haemorrhages, however most cases are transient and resolve spontaneously with no consequence. There is no known medication for treating the retinal haemorrhages, and treatment with corticosteroids, acetazolamide and nonstoroidal anti-inflammatory drugs have shown to be ineffective at modifying the course of the condition.3

It is important to differentiate HAR as a cause of a retinal haemorrhage from other causes such as diabetic retinopathy, hypertensive retinopathy, retinal vein occlusion and leukaemia, which may require intervention. 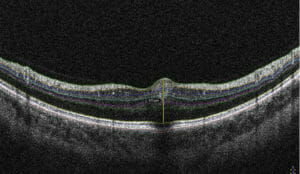 HAR does not appear to be predictive for assessing the risk of life-threatening complications. However, extreme cases of altitude illness may progress to high altitude cerebral oedema or high altitude pulmonary oedema, which can be lethal if not treated. These conditions will present with symptoms of disorientation, nausea, altered consciousness and ataxia. Treatment involves descending to lower altitudes, oxygen and steroids. 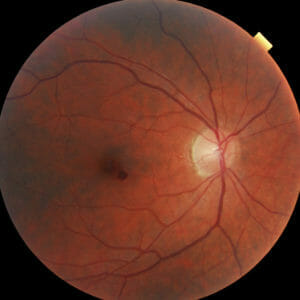 Being a commercial pilot, Tara was unable to work until her right visual acuity resolved to meet the visual standards required for flying. Fortunately for Tara, her retinal haemorrhages resolved spontaneously and she is back at work.