The Femtis Extended Depth of Focus intraocular lens (EDOF IOL) by Oculentis facilitates predictable lens positioning and a study shows it can eliminate unwanted visual phenomena. Although the need to use Femtosecond laser adds expense to the procedure, alternative approaches are imminent.

Modern IOLs have transformed cataract surgery from an operation that cures disease to a sight enhancing procedure. With more than 200 lenses available in Australia, guiding the patient toward the correct choice of lens is an important role of the surgeon and optometrist. The range of optical lens technologies now available gives patients excellent cutomised visual outcomes, but also presents the question of why we still need more lens designs and what features are needed. 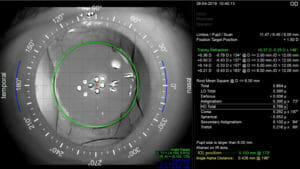 Current lens designs perform remarkably well but could be improved by better controlling the final lens position in the eye. Better and more consistent alignment with the visual axis is desirable and more predictable effective lens position will improve refractive outcomes. The other area of concern with presbyopia correcting IOLs (multifocal and EDOF) is the incidence of patients experiencing unwanted visual phenomena after lens implantation in the form of halos and glare at night, and negative dysphotopsias.

Oculentis has addressed these issues with a new lens design – the Femtis. The Femtis IOL modifies the existing refractive segmental presbyopia correcting IOL by allowing it to be attached to the edge of the anterior capsulorhexis, thus giving a predictable and constant lens position in the eye. 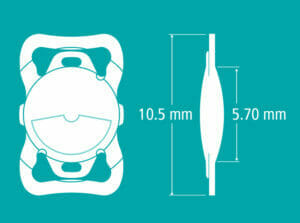 The Femtis EDOF lens uses the existing Oculentis presbyopia correcting – segmental asymmetric and pure refractive – technology. This lens behaves as an EDOF IOL and has the benefit (when compared with diffractive multifocal and EDOF IOLs) that night halos are virtually non-existent, so patients have a functional range of vision without unwanted visual phenomena.1

THE FEMTIS IOL AND PROCEDURE

Femtis is a hydrophilic acrylic EDOF IOL, with a full refractive optic, using a segmental near element with a nominal add equivalent of 1.5D at the lens. It is a plate haptic design with four additional flanges located on the anterior surface of the lens at the optic edge for capsular fixation. The EDOF optical design of Femtis has been in clinical use for several years, both as a full strength multifocal IOL and as an EDOF lens. We have previously demonstrated that this refractive design is well accepted by patients due to the minimisation of unwanted visual phenomena (Figure 2).

Cataract surgery with Femtis implantation is performed using the Femtosecond laser with a standard technique. Key to Femtis implantation is an intact and circular capsulorhexis of between 4.8 and 5mm diameter. The lens is injected initially into the capsular bag through a 2.2mm incision under viscoelastic. Viscoelastic is removed from behind the IOL prior to attachment of the enclavation flanges to the rim of the capsulorhexis. Enclavation typically takes around 45 seconds. The enclavation points are inspected to ensure the iris is not trapped and viscoelastic is removed from the anterior chamber (Figure 3).

We have now completed a prospective study of the Femtis lens, which looked to demonstrate both the performance of the EDOF IOL when used with capsular fixation and the stability of the IOL position over time. Twenty-five patients were enrolled with 44 operated eyes. Most cases were bilateral implantations of the Femtis lens using the Catalys femtosecond laser (Johnson & Johnson) to create a 4.9mm capsulorhexis centred on the equator of the capsular bag. 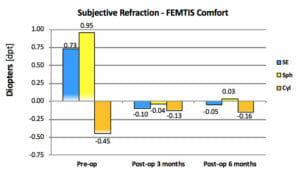 Excellent refractive predictability was demonstrated with 91% of patients being within 0.5 D of intended outcome (Figure 4). The toric version of this lens is not yet available, so patients predicted to have more than 0.75 D astigmatism were excluded. Of the patients implanted, 66% could see 6/6 and N6 without glasses – so they had spectacle independence. A subjective questionnaire, as devised by Kohnen et al and applied at six months post operation, showed 56% of patients never wore glasses, 25% sometimes used reading glasses and some occasionally used glasses for computer work. The binocular defocus curve demonstrates the lenses behaviour as an EDOF IOL (Figure 5).

IOL positional stability was determined using sequential slit lamp images that showed the IOL optic edge and limbus. Images were analysed to determine the optic centre at each visit from surgery to month six. The median shift in IOL position over six months was 0.095 +/- 0.09mm. This lens shift of around 90μm is clinically insignificant and demonstrates that once the lens is placed on a given axis in the eye with attachment to the capsulorhexis, this position will be maintained long term. This is an important outcome as it could be envisaged that with a deliberate offset of the capsulorhexis from the geometric centre of the anterior chamber, the uneven amount of anterior capsule on either side of the IOL could shift the IOL as capsular fibrosis occurs. We observed no cases of capsular phimosis or lens movement/de-enclavation.2 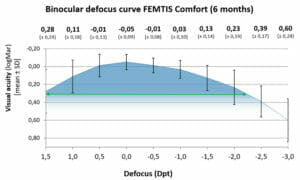 Unwanted visual phenomena (glare, haloing and shadowing) were studied subjectively with a questionnaire and objectively with quantitative outcomes using a computer based simulator (Eyeland design network GmbH) (Figure 6). Typical scores for halo and glare were zero on the simulator. This compares very favourably with diffractive EDOF and multifocal IOLs, where 100% of patients will score for halos, even if these are not clinically impactful (Figure 7).

Posterior capsule opacification requiring YAG capsulotomy occurred in 18% of patients. This incidence of YAG capsulotomy is similar to that seen for other EDOF and multifocal IOLs used in our practice and fits with the higher capsulotomy rate generally observed with presbyopia correcting IOLs.3

Negative dysphotopsia was not reported by any patient. By controlling the relationship between the lens and the anterior capsulorhexis, the capsulorhexis margin sits at the plane of the optic edge rather than overlying it. Additionally, the space between posterior iris and anterior lens surface is minimised to less than 600μm. As a result of these features, the Femtis fulfils the currently held surgical concepts for minimising or eliminating negative dysphotopsias.4,5 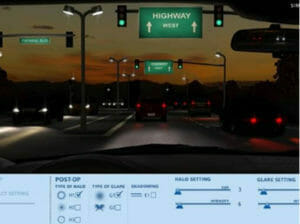 CAPSULAR FIXATION OF THE IOL

Capsular fixation of the IOL offers the benefits of precise alignment of the lens optic and lens position in the eye and control of negative dysphotopsias. Other designs of capsule fixated IOLs exist but are little used as they are either complex to use – for example, the ‘Bag in the Lens’ IOL requires a primary posterior capsulotomy – or do not offer EDOF/multifocality – for example, the Masket ND IOL. A newer design with swivelling haptics has recently been described by Ganesh et al.6

Femtis is approved by the Therapeutic Goods Administration and prosthesis schedule listed in Australia, and available for clinical use as either a monofocal or EDOF IOL. A toric version is soon to become available and capsular fixation should allow precise toric alignment and stability as the lens can be rotated after attachment to the capsulorhexis.

APPLICATION OF THE FEMTIS EDOF

Capsular fixation of the IOL makes sense and this concept opens other possibilities for IOL design. Predictable alignment with the visual axis is not possible with other lens designs as the lens will find its own position in the capsular bag. Many surgical manoeuvres are described to modify the IOL position but none gives complete control of the final alignment and position of the IOL. Alignment with the visual axis becomes more important in eyes with a larger angle alpha (displacement of the visual axis from the geometric centre of the capsular bag) and for more complex optical designs such as EDOF and spherical aberration correction. The optical design of lenses can become more precise if they do not need to allow for possible decentration from the visual axis.7 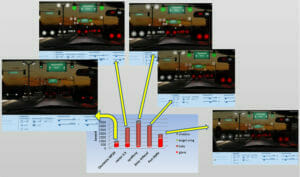 Femtis EDOF is my lens of choice for the predictability of the final IOL position and absence of unwanted visual phenomena – the only barrier is the need for Femtosecond laser capsulotomy – which is an expense for the patient.

The Femtis EDOF IOL is shown in this trial to give excellent refractive results with high patient satisfaction due to the functional range of vision and absence of unwanted visual phenomena. A perfect capsulotomy is key to success with capsular fixation and while access to a Femtosecond laser may be a barrier to wider use of this lens, alternate automated capsulotomy techniques such as Zepto and Capsulaser will offer wider access to this improved lens design.

Dr Patrick Versace is a specialist refractive and cataract surgeon currently on sabbatical leave in Europe. He has one of the longest established refractive surgery practices in Australia based in Sydney’s Bondi Junction where he offers Laser Vision Correction, LASIK, SMILE, Lens implant and Laser Cataract Surgery. Dr Versace has an appointment at the UNSW as a Clinical Lecturer in the faculties of medicine and optometry and at Prince of Wales Hospital as a Senior Staff Specialist. Dr Erica Darian-Smith is an ophthalmology trainee at the Prince of Wales Hospital, Sydney Australia. Dr Darian-Smith has an interest in corneal and cataract surgery.