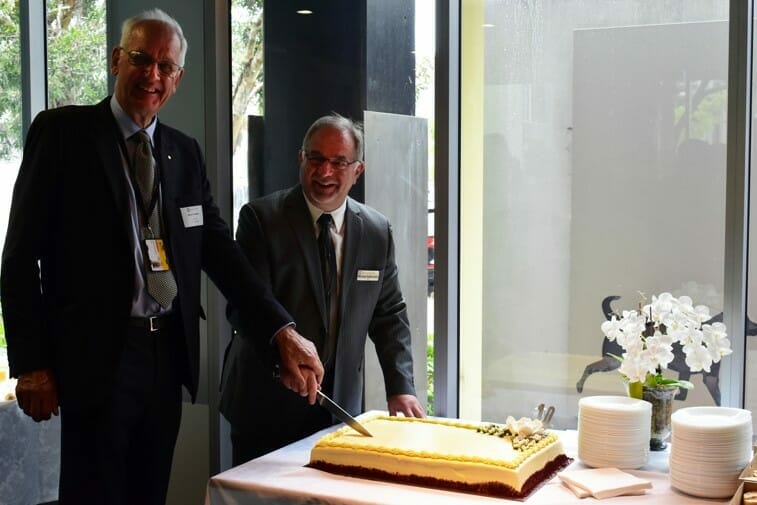 The Centre for Eye Health (CFEH) continued its 10th Year anniversary celebrations with a commemorative lunch and speeches presented by influential figures in the Centre’s success. As a joint initiative of Guide Dogs NSW/ACT and UNSW, CFEH provides state-of-the-art diagnostic and disease management services with the goal of reducing preventable blindness. Additionally, CFEH is providing a nexus to link patients with vision loss with a range of vision rehabilitation through Guide Dogs NSW/ACT and other patient support services.

Andrew McKinnon, Optometry NSW/ACT CEO, welcomed the attendees with a retrospective look at the Centre, and the extent to which the profession of optometry has benefited from its support over the years. From its early genesis in 2006 through to its current position in the eye health community, CFEH has evolved to provide “world class management clinics for glaucoma, retinal disease, and diabetic retinopathy which help practicing optometrists manage their patients with chronic non-urgent ocular disease,” said Mr McKinnon. 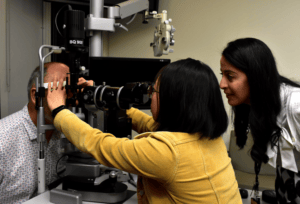 Mr McKinnon also acknowledged CFEH’s imminent position as an educator of undergraduate and practicing optometrists and as a leader of research in the optometric field.

In his address Barry Stephen OAM, President of Guide Dogs NSW/ACT, reflected on the early days of CFEH’s inception where the concept for the Centre emerged from recognition of the emerging problems caused by the intersection of a stressed public health system and an aging population. 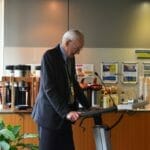 “There was a realisation at the time that if nothing changed there could be a tsunami of demand for the mobility services which Guide Dogs provides,” said Mr Stephen.

“The aim of the centre was, and continues to be, to reduce the incidence of preventable vision loss.”

Mr Stephen said that anecdotal evidence accumulated over the past 10 years shows “that the vast majority of our referrals are those that would have otherwise joined the waiting list at a public hospital. We have achieved our original aim of making it easier for ophthalmologists in the public system to focus on those most in need of their expertise.”

“Over this 10 year period the centre has examined over 65,000 clients and our analysis indicates that around 9,000 required ophthalmological or medical intervention. Around 16,000 were discharged back to their referring practitioner and around 34,000 required continued monitoring as they were at high risk of disease.” 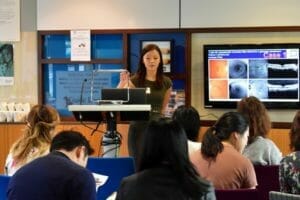 This data highlights the problem of non-essential referrals to public ophthalmology from GPs and community optometrists and CFEH’s significant role in alleviating this burden. Mr Stephen also said that such data suggests “roughly 50,000 people would have been referred to either public or private ophthalmology when they did not require this service”.

Professor Simon Killcross, Deputy Dean Education of the Faculty of Science, spoke of UNSW’s strategic partnership goals and the significance of the relationship with Guide Dogs NSW/ACT.

Professor Killcross recognised the main endeavour of UNSW to “make really significant contributions to national and global prosperity”. He acknowledged the impact CFEH has had on helping alleviate the burden of vision loss, hence fulfilling the goal of bettering the community. 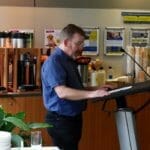 Recalling the opening of CFEH in 2009, Professor Lisa Keay, Head of the School of Optometry and Vision Science, also recognised the mutual benefits of the close collaboration between CFEH and the School, which are co-located on campus.

“The Centre For Eye Health contributes to our teaching. They teach pathophysiology and diagnosis of ocular disease to our third year cohort. They also provide a six week clinical rotation to our final year students.”

Prof Keay acknowledged the importance of this program in engaging students with state-of-the-art facilities, familiarising them with the latest instrumentation and how to interpret imagining and analysis techniques. 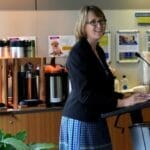 “They’re really placing our students in great stead to practice at the forefront of our profession,” she said.

Professor Michael Kalloniatis, Centre Director, concluded the celebration by thanking the donors and supporters of Guide Dogs, acknowledging that funding through Guide Dogs has allowed the Centre to remain operational during the previous 10 years. 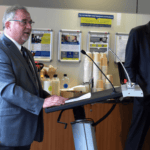 Prof Kalloniatis also discussed the significance of “developing pathways to allow fair and equitable access to eye care for all members of our community”. He said that the Centre is also working on “putting in place evaluation processes so we can show that they are even better than current pathways”.