Now in its 30th year, Blind Golf Australia continues to welcome players new and old into its supportive community of vision impaired golfers. Regular tournaments, both locally and interstate, provide players with an opportunity to enjoy the sport and reap it’s many social benefits.

Blind Golf combats the common misperception that the vision impaired are unable to participate in the sport they love. There are only very minor modifications to the traditional game, most of which are centred around the role of the caddy in assisting the player.

It doesn’t matter where you go, you can get in touch with people and make new friends 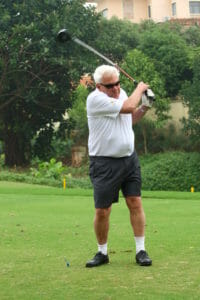 Acting as the “eyes” of the golfer, the caddy responds to players individual needs by watching where the ball goes and letting them know what’s happening around them in terms of obstacles and distances. Unlike in sighted golf, the caddy can stand directly behind the flag and, in the case of totally blind players, can also position the club for the player to ensure each swing makes contact with the ball.

Doug Sloan, President of Blind Golf Australia and Blind Golf Victoria, said the important message is “you don’t have to see it to tee it.”

After losing his sight in a car accident, Mr Sloan was unable to take part in many of his favourite sports. After a highly commendable 17-year stint playing Blind Cricket, Mr Sloan took up Blind Golf, a passion which has lasted 20 years and counting.

“It’s a lot of fun and social wise, it’s terrific. Every time we go interstate we meet new people – fellow golfers, volunteers, caddies. It doesn’t matter where you go, you can get in touch with people and make new friends,” said Mr Sloan.

As well as the social benefits, Blind Golf keeps people healthy both physically and mentally. While a high level of fitness is not required, Mr Sloan says an 18 hole course requires persistence and isn’t always a walk in the park. Although considered a difficult sport to play for the visionally impaired, Mr Sloan said it’s very rewarding and anyone can get involved.

“It’s sad when you hear from someone who thinks they can no longer play golf because of their vision impairment. People are often unaware of Blind Golf, and private golf clubs often don’t have the mechanisms to support their vision impaired members,” he said.

Mr Sloan’s message to golfers is “don’t give up, come and join us” and, for those new to the sport, Blind Golf Australia can provide training. In Victoria, lessons will even be paid for, courtesy of Blind Golf Victoria.

To find out more about Blind Golf Australia contact Doug Sloan on (AUS) 0418 344 243 or visit blindgolf.com.au.