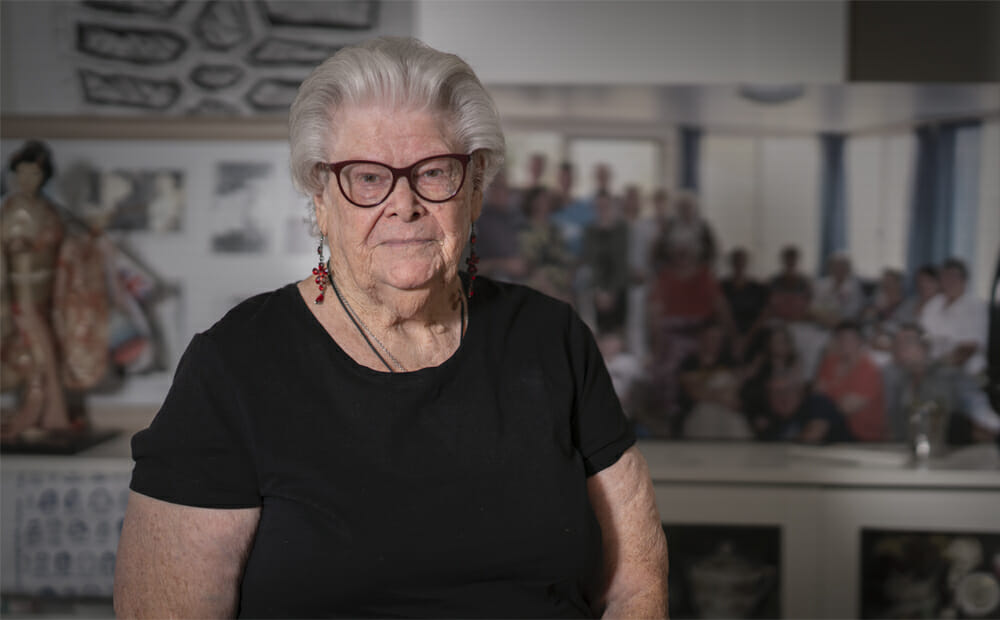 The ability to recognise faces and expressions is crucial to our social interactions. People living with age-related macular degeneration (AMD) find this difficult, sometimes impossible, leading to reduced confidence and quality of life. Dr Jo Lane and her colleagues from the Australian National University (ANU) have interviewed people living with AMD to understand their experiences and provide tips for family, friends, carers and health care professionals to help improve social interactions for people living with AMD.

Imagine sitting at a table at a social function for two hours and not knowing who the people at the table were, or passing a close friend in the street without saying hello. Perhaps worrying you have offended someone because you could not see they were joking, or that people might think you are rude or unfriendly because you ignored them. These are some of the experiences people with age-related macular degeneration (AMD) have reported because they find it difficult to see faces, and as a consequence, have poorer social interactions and reduced confidence and quality of life.

Age-related macular degeneration (AMD), is a progressive disease that causes central vision loss and is the leading cause of legal blindness in Australia.1

62% said their problems with seeing faces had reduced their confidence

Comparative baby portraits depicting how faces appear to a person living with AMD including blurring, distortions and a ‘black blob’ (scotoma).

AMD damages central vision and therefore affects a person’s ability to do everyday tasks requiring fine vision, including reading, driving, cooking, hobbies,2-3 and face perception.4-9 Until recently, little research had been conducted on the impact of reduced face perception on social interactions in AMD. Now researchers at the Australian National University have interviewed twenty-one people living with AMD, ranging from mild vision loss (still driving) to severe vision loss (legally blind). The participants were asked to describe how faces looked to them and how their reduced face perception impacted their social interactions and quality of life.

HOW FACES APPEAR IN AMD

The typical depiction on vision websites, of how faces appear for people with AMD, is with a big ‘black blob’ in the central vision. However, this was not what many people in this study experienced. Rather, participants described faces as appearing blurry, which meant they often could not see the internal parts of the face clearly. As an example, one participant said a person had “two holes for the eyes”. They also described distortions and missing parts in the face: “one side the mouth goes up and the eyes keep disappearing”, and “I can see the right-hand side of you … not the left”. One third of participants described other general visual disturbances e.g., black flecks, lights and floaters. Only three participants described seeing a “black blob” in the centre of their vision and, rather than seeing a “black blob”, another participant described their vision as “looking through a screen”, or “looking through black tulle”.

Face perception is vital for social interactions. Faces help us identify who a person is, how they are feeling, if they are engaged or making eye contact, and they help with facial speech via lip-reading. Before this study, it was anticipated that only people living with severe vision loss due to AMD would find it difficult to see faces. All participants, however, including those with very mild vision loss (visual acuity 6/7.5) said AMD had made it harder to see faces – both to recognise a person’s identity and to see facial expressions.

Participants said they often made mistakes recognising others. This included failing to recognise people they know. Comments made included, “The other day, I didn’t even recognise my son… he was within a yard or two of me and I didn’t recognise him.”

Another person described accidentally saying hello to someone they don’t know. “I went up to someone [I thought] I knew very well and started having a conversation with them. They looked at me blankly, and I realised they were not who I thought they were. It was very embarrassing!”

People living with AMD often described difficulty interpreting social situations because they could not see facial expressions. “I thought my doctor was upset with me and I couldn’t work it out, but my daughter said he was having a joke just to crack the ice.” Participants also said group situations were particularly challenging, “I find crowds uninteresting … if I can’t see and can’t place people, then it’s a bit of a waste for me”.

IMPACT OF LOSS OF FACIAL PERCEPTION

In addition to finding it hard to see faces, people living with AMD said people around them did not understand how AMD impacts their vision and they worried what other people thought of them. One person commented, “I worry people think I am faking. They say ‘your eyes look perfectly normal’”. Another person reported, “I know I walk past people and ignore them because I don’t recognise them… I am sure that I upset people… what they think of me I don’t know; it worries me”.

The impact of reduced face perception on people living with AMD in social situations included feeling like they were missing out. Comments included, “You can’t feel completely part of what’s going on”, and “you’re not with the rest of the crowd”. As a result, they reported withdrawing and being passive in social situations; “when you make a mistake recognising others, you want to go back and put yourself in a corner or in your room somewhere away”, and “I’m more passive, definitely less interactive, and tend to stay in the background”. They were also less willing to have social interactions, with one participant stating, “I don’t socialise anymore… I would think I would hurt people’s feelings… they thought you were getting on famously and then next time you don’t recognise them… it’s easier not to put yourself in that situation”.

Of participants in the study, 62% said their problems with seeing faces had reduced their confidence: “I am more mousey now… I go up to the social area and sit down quietly, whereas one time I would have been the president”. Additionally, 76% said it had reduced their quality of life: “It used to be my pride, I could recognise people and give him the name… [now I can’t do that anymore] it feels as though it’s not me”.

The findings from the first interview led to the development of community resources to improve understanding of how reduced face perception affects social interactions and quality of life for people living with AMD. Participants provided feedback on these resources in a second interview and input was also provided by Macular Disease Foundation Australia.

The resulting information sheet provides tips for people living with AMD, including how to tell others they find it difficult to see faces; ask people to move closer; and remind people about this difficulty, as they can forget.

It is important to remember that AMD affects each person differently. With this in mind, a Conversation Starter tool has been designed to encourage conversations with a person living with AMD. The tool aims to help provide understanding and insight into what they experience and what other people can do to help in social situations.

You can download the resources at ANU Open Research: openresearch-repository. anu.edu.au/handle/1885/155649 The full research paper can be accessed at: journals.plos.org/plosone/ article?id=10.1371/journal.pone.0209218

Dr Jo Lane is a Research Fellow and a Cognitive and Clinical Psychologist in the Research School of Population Health at the Australian National University. Her PhD research focussed on improving face perception and quality of life in age-related macular disease.