The Council of the Royal Australian and New Zealand College of Ophthalmologists (RANZCO) has appointed Clinical Professor Nitin Verma as President-elect. He will formally take up the role of President on 10 October 2020.

While he is not currently a Director, Clinical Prof Verma has been a long time member of the RANZCO Board and was Vice President over the period 2018–19. He currently chairs the RANZCO Future of Ophthalmology Taskforce and has been a member of many RANZCO committees. 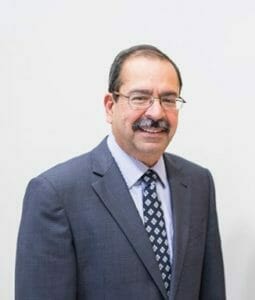 Clinical Prof Nitin Verma AM has been a part of Hobart Eye Surgeons for 15 years.  He is actively engaged in the management of macular degeneration, and heads a number of research projects concerning new drugs and treatments for the disease, as well as diabetic macular oedema. He was awarded the Meritorious Service Award for Prevention of Blindness (Asia Pacific Academy of Ophthalmology) in 2009.

He leads the East Timor Eye Project, coordinating philanthropic, eyecare work in East Timor, by doctors, optometrists and nurses from almost all states of Australia. For his work, he was awarded the Order of Timor Leste in 2010, and was appointed Honorary Consul to East Timor, in 2006.

Clinical Professor Nitin Verma AM is on several Academic committees and Boards of Philanthropic organisations including Macular Disease Foundation Australia.