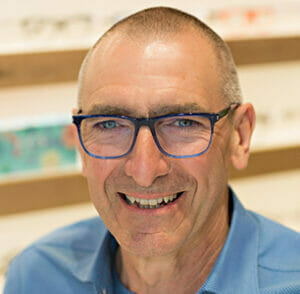 Mr Fuller, who is the ACO’s 25th recipient of life membership, received the award at its annual general meeting, held as a virtual event this year due to COVID-19 restrictions.

A Fellow of the ACO (FACO), he is the owner of Horsfalls Optometrists in Echuca and Kyabram, Northern Victoria, where he has practised for 35 years. It is one of the largest rural optometry practices in Victoria.

ACO Honorary Life Membership is presented to someone who has provided distinguished and meritorious service to the College or to the profession; who is held in high esteem for their work and contributions both in and outside of the ACO, and has been influential in the community, having earned the respect and recognition of their colleagues.

Mr Fuller has an ongoing involvement in the optometric profession at a state and national level, being a member of Optometry Victoria/South Australia and a past councillor of the Australian Optometric Association (Victorian Division.)

He has been a Board member and past vice-president of the Australasian College of Behavioural Optometrists (ACBO).

He contributed greatly to the Australian College of Optometry as a councillor, honorary treasurer and member of various committees over the years.

Mr Fuller serves on the Board of independent practice group ProVision Eye Care, where he has been a director for 15 years and held the position of chair of the Finance Audit and Risk Committee.

He graduated from the University of Melbourne in 1979, and has a keen interest in children’s vision, having completed a Fellowship in Behavioural Optometry in 2000. 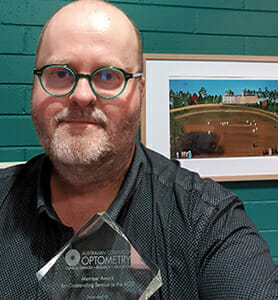 The ACO Member Award for Outstanding Service awarded to a member who has contributed actively to the governance of the ACO, either on a committee and/or council, and who has consistently and generously provided support, time and advice beyond the expectations of a committee/council, was awarded to Rod Baker, FACO from Melbourne.

The National Vision Research Institute Fellowship for researchers who have made a significant contribution to the practice and profession of vision science and are held in high esteem, was awarded to Associate Professor Ulrike Grünert.

ACO Fellowships awarded to ACO members who have been a member for the past three years and who have made significant contributions to the practice and profession of optometry and to the community were awarded to Melbourne optometrists, Elisse Higginbotham, recently appointed as Lead Optometrist, Paediatric Services at the ACO, plus Optometry Australia’s Policy and Standards Advisor, Clinical Editor of Pharma, and teaching scholar in the Deakin University School of Medicine (Optometry), Kerryn Hart.

The Nicola Family Travel Grant to support young professionals as they begin their career in vision research was awarded to Jason Jung from Queensland.

The ACO Outstanding Graduate Award for ACO Certificate in Ocular Therapeutics award granted in recognition of the candidate who has achieved the highest score across all assessments for their graduating year of the ACO Certificate in Ocular Therapeutics was awarded to Kenneth McLaren who practises in Beerwah on the Sunshine coast, Queensland for Specsavers.

‘Having graduated quite a few years ago, doing therapeutics was a means of staying up to date with the rapidly changing face of optometry,’ he told Optometry Australia.

ACO Outstanding University Graduate Awards for the most outstanding optometry graduate, nominated by their universities, were awarded to:

This article was published with the permission of Optometry Australia.