Endorsed by ophthalmologist and Australian of the year, Dr James Muecke, Check My Macula is a short online quiz to learn the risk factors for macular disease and book an eye exam with an optometrist accordingly. As one in seven Australians over the age of 50 have early signs of age-related macular degeneration (AMD), the campaign aims to raise awareness of the disease and potential for sight-saving treatment.

A YouGov Galaxy polled commissioned by MDFA reveals only one in 10 Australians aged 50 to 59 can identify the major risk factors for AMD, and although more than 80% know they should have an eye exam every two years, almost 40% gamble with their sight by skipping them. 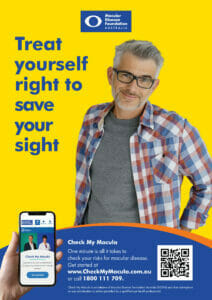 Entertainer Shane Jacobson joined the campaign to caution people that, “If you’re over 50 and you don’t know your risk factors for macular disease, you’re at risk of going blind. It’s that serious”.

MDFA Ambassador Jean Kittson, who has family experience with macular disease, has also joined the campaign. Her mother has lived with AMD for more than 30 years, therefore increasing Jean’s chance of developing AMD by 50%.

“Now I’m in my 60s, there’s a lot to check: my hearing, my skin, my eyesight, the list keeps growing. However, because of my family history, I do make sure that I get an eye test and macula check every year,” says Jean.

Broadcaster Chris Smith, who was diagnosed at age 52, also shares his experience with AMD, demonstrating the importance of regular eye exams.

“That was a shock. It obviously upset me a lot, but it’s stabilised, and that’s a good thing. The earlier they can get in and help you, the better it is,” he said.

Brendan (Jonsey) Jones also describes of a motorbike incident that taught him to never take good eyesight for granted. In the campaign he shares his story about the resilience of eyes and that, if you get on to things earlier, there’s a good chance of avoiding serious vision-impairment.

The campaign, which will include a television commercial, is set to feature these Australian celebrities and more. The Check My Macula quiz is available at www.CheckMyMacula.com.au.