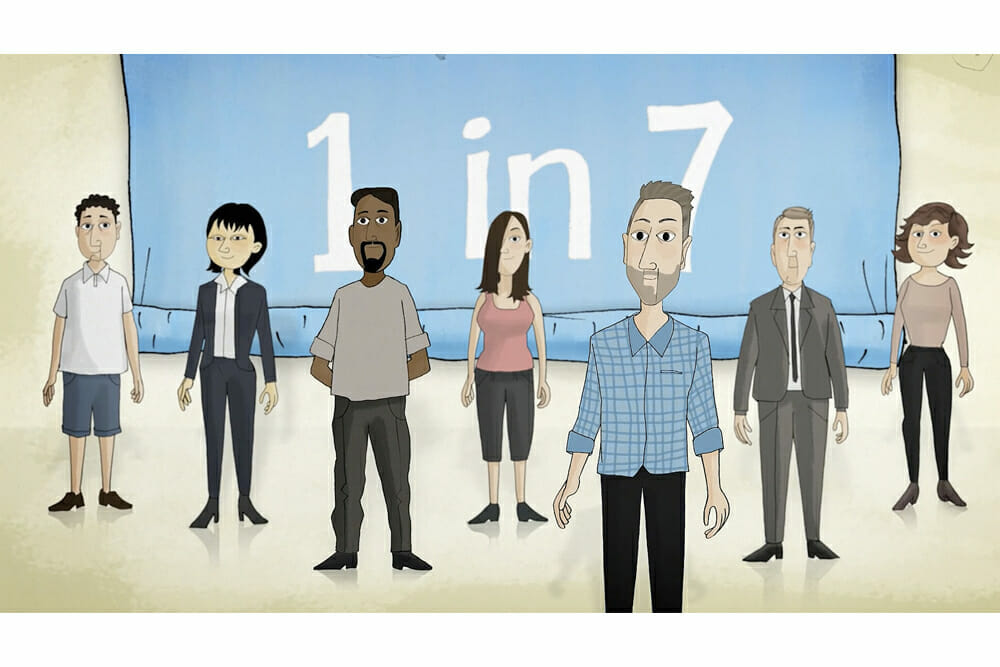 Macular Disease Foundation Australia is hoping for a significant spike in the number of people booking eye examinations, with the launch of a nationwide Check My Macula publicity campaign.

MDFA is urging eye health professionals to join the starstudded list of names who have thrown their support behind a new Check My Macula initiative, which is aimed at Australians in their 50s.

Australians in their 50s are putting themselves at risk of going blind, with a new survey revealing only one in 10 are able to properly identify the major risk factors for age-related macular degeneration (AMD), Macular Disease Foundation Australia (MDFA) has warned.

It’s all about getting people to have an eye exam in a timely fashion, because as we all know, early action can save sight 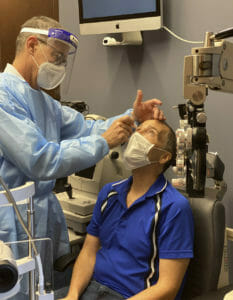 Nelson Aspen with his ophthalmologist.

The YouGov / Galaxy poll commissioned by MDFA found that only one in 10 people aged 50–59 can accurately identify the major risk factors for AMD: age, family history, smoking and lack of regular eye exams.1

One in seven Australians over 50 have the early signs of AMD – Australia’s leading cause of blindness and severe vision loss – but may not know until it’s too late.

MDFA CEO Dee Hopkins said the new survey also showed that more than 80% of people in their 50s know they should have an eye exam every two years.

“But even though they know this, almost 40% gamble with their sight by skipping out on these exams,” Ms Hopkins said.

“Check My Macula aims to remind Australians to add an eye exam, including a check of the macula, to the ‘shopping list’ of other health tests we’re told to tick off when we turn 50.

“We’re hoping optometrists will see a significant spike in the number of people coming in for eye examinations as a result of this campaign.”

WHAT IS CHECK MY MACULA?

Check My Macula is an online quiz, available at www.CheckMyMacula.com.au, supported by a national publicity campaign.

“People who complete the quiz are then encouraged to visit their optometrist for a comprehensive eye examination, or schedule a reminder for an eye exam, as appropriate,” Ms Hopkins said.

The campaign, which launched on 27 October, is endorsed by the current Australian of the Year, Adelaide ophthalmologist Dr James Muecke AM.

“The Check My Macula consumer campaign is speaking directly to Australians in their 50s and is designed to help them identify their risk factors for macular disease,” Ms Hopkins explained. 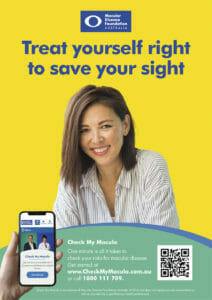 “As well as receiving the endorsement of our Australian of the Year, we’re using star power to reach a younger audience in their 50s who might not know they’re at risk of macular disease, despite their age being a key risk factor,” she added.

For 57-year-old Aspen – the US-based show business editor of Channel Seven’s Sunrise – his annual eye exam in September was the first time he’d hopped on the New York subway since the COVID-19 pandemic shut down the city in March.

“It’s an important part of my life, just like going to the gym or exercising,” he said.

“And it’s important that even when your vision doesn’t change, you’ve got to go anyway – I always have.”

Brendan Jones – who hosts the toprating Jonesy and Amanda breakfast show alongside Amanda Keller on Sydney radio station WSFM – also opened up on a “debilitating” eye injury that enhanced his appreciation of good vision.

“I just don’t think we should take for granted how important our eyes are,” ‘Jonesy’ said.

“If you look after them, if you find something early, there’s a good chance you’ll be able to head it off at the pass.”

“Fifty-year-olds don’t feel old, and while they’re aware of AMD, they associate the disease with the elderly,” Ms Hopkins said.

“It’s also the age when a lot of other health tests are required. Unfortunately, eye exams often get pushed to last on the list when people are time-poor.

“We hope that by using our celebrity influencers to start a conversation about the importance of regular eye exams, particularly after turning 50, we will reach Australians that don’t usually tune in to our regular ‘Macula Month’ campaigns.

“Check My Macula gives these people the information they need quickly. In less than one minute, they can find out their risk factors. They are then encouraged to book in with their own optometrist, or find a nearby optometrist and book an appointment straight away.

“It’s all about getting people to have an eye exam in a timely fashion, because as we all know, early action can save sight,” Ms Hopkins said.

Tom Smith is the marketing and communications coordinator at Macular Disease Foundation Australia.

How you can support Check My Macula

MDFA has developed a digital toolkit to help eye health professionals support its Check My Macula initiative. The toolkit contains social media imagery and messaging that can be tailored to individual practices, as well as an order form for free MDFA resources such as in-store posters, Amsler grids and patient resources.

Throughout November, MDFA will be rolling out different aspects of the Check My Macula campaign via its social media channels.

Luxottica Commits to Growth in Care

To Grow and to Flourish: Effective Graduate On-boarding