Motilin – a peptide hormone traditionally associated with being a gut receptor that resides in the stomach and duodenum – may become a new target for dry eye disease treatments. This comes following the first discovery of the motilin receptor (MR) in the lacrimal gland, by researchers at Save Sight Institute Sydney and Douglass Hanly Moir Pathology.

“The role of the motilin receptor has traditionally been ascribed to stimulating the contraction of the gall bladder and the sphincter of Oddi,1” explained Dr Richard R Sadig, Save Sight Institute, Sydney, who led the study. “However, this theory was revised when motilin receptors were also found in the brain – prompting many to ask the question – what else can motilin do, where else could it be located?”2

Dr Sadig described discovering MR in the lacrimal glands as being “like Christmas in July”.

“I looked down the microscope, and saw the red stain light up everywhere – it was like Christmas in July. In science, and particularly in medical research, you very rarely get the chance to see something that no one else has seen before. All the low hanging fruits are almost always already picked, and most of your research ends up on a shelf – this is what one of my undergraduate honours professors once warned me about.”

Dr Sadig said he instantly knew this discovery was different. “This was the first time this receptor had been found in this organ and I was looking at it raw, untouched, undiscovered – impossible you would think in the 21st century. I wondered how others before me had missed it.”

While many people describe a first time discovery as an “aha moment”, for Dr Sadig, the experience was like a “golden silence… a sort of tranquillity –like the silent dance of life.”

“I experienced the feeling that Sir Alexander Fleming or James Watson probably felt when they discovered penicillin and the double helix structure of the DNA molecule respectively. It’s an intimate feeling – unique unlike any other measurable milestones of life such as marriage, the birth of a child, or financial success.”

When Dr Alexandra Allende from Hanly Moir Pathology and her team confirmed that all lacrimal glands had the MR, Dr Sadig said it became clear that the discovery was not an anomaly or a fluke finding.

Armed with this confirmation, he and his team postulated that it may also be involved in tear film physiology.

This idea was spearheaded by the eminent ophthalmologists, Dr Kenneth Ooi and Professor Stephanie Watson, who were principal investigators of this project, together with prominent ophthalmology researcher A/Prof Michele Madigan,” he explained.

The results were very convincing, with all lacrimal gland specimens (100%) showing evidence of MR expression. Most lacrimal tissue (77%) contained MR in a relatively sparse and punctate distribution (+1); with a small number of specimens demonstrating dense distribution with a grade +2 or a grade + 3 distribution. These specimens usually tended to have intercurrent pathology. Low level grade1+ MR staining was also seen within the accessory lacrimal glands of one specimen and within the meibomian glands of one specimen in a focal distribution. However, on the whole, the remaining specimens containing meibomian glands (5/6; 83%) were conclusively negative for MR.

Other eyelid structures, such as the glands of Zeis, glands of Moll, eccrine glands and cutaneous sebaceous glands), did not express any MR. The limitation of this study was that the majority of specimens analysed were diseased specimens (84.6% were basal cell carcinomas) – the significance of which is currently unknown.

The parasympathetic innervation of the lacrimal gland is the primary medium for lacrimal stimulation and the release of vesicular contents that contribute to the tear film (predominantly the aqueous component).3-5

“Thus, the postulation is that motilin may potentially play a supporting role in lacrimal output – either through post synaptic influences or through central presynaptic influences – this is the main clinical reasoning behind this research paper,” said Dr Sadig.

“If motilin is present in the gut and in the brain, and is now found to be present in the lacrimal gland as well, then logically we postulate there might be a cross talk between these systems – a kind of ‘gut/brain/lacrimal axis’ – akin to the famous Pavlov Dog’s scenario, where the sight of food was enough to stimulate salivation, as well as pre-emptively prepare the digestive system for incoming food.7

“Furthermore, we postulate that targeting motilin might be a new way to treat dry eye disease if motilin proves to be pivotal in tear film formation,” he said.

Having made this initial discovery, Dr Sadig is excited to go further:

“The issue with first time discoveries is that they quickly become an addiction. You want to know more about it, the structure, the function, and you want to do a 101 things with it, because in your mind, it’s an untouched marvel like Antarctica.

“I think the implication of this finding is to hopefully find a better understanding of the gut/brain/lacrimal axis and how tear film may be regulated [or dysregulated] by changes in brain/ gut dysbiosis or autoimmune conditions like Sjögren’s Syndrome. 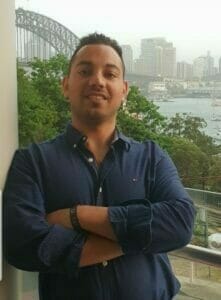 “I do acknowledge that I am riding on the shoulder of giants in the field – namely Dr Kenneth Ooi and Professor Stephanie Watson – who ought to be wholly credited for the brainchild of this project and for giving me this unique opportunity to experience an imperishable memory. In regards to their visionary minds, I cite the famous quote that, ‘the seeds of great discoveries are constantly floating around us, but they only take root in minds well-prepared to receive them’ (Joseph Henry).”