A recurrent patient case highlights the need to differentiate between episcleritis and scleritis then treat accordingly.

Eric,* a 29-year-old male teacher, presented complaining of redness and mild discomfort in his right eye with an onset two weeks prior. He reported no discharge or light sensitivity, but was aware of slight distance blur after a year of lockdown. He felt this had happened gradually and was not correlated with the onset of his red eye. He could not recall his last eye examination and had not experienced any episodes such as this in the past. He was in good health, had no previous ocular prescriptions, and his family ocular history was negative for any disease.

Episcleritis is usually benign and self limiting, however care should be taken in diagnosis and management 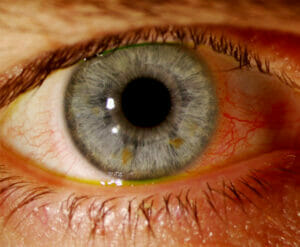 Examination revealed conjunctival hyperaemia nasally in the right eye (Figure 1), with mild associated staining. No corneal involvement was noted, and the anterior chamber was quiet.

He was diagnosed with diffuse episcleritis, prescribed Fluromethalone eye drops to be used three times daily, and was reviewed five days later. Upon review he reported that his symptoms had subsided after the second day of treatment. Treatment was ceased, and Eric was advised of the possibility of recurrence and that episcleritis could be related to a systemic condition. He reported no health issues and denied any joint or back pain, and had no family history of any autoimmune conditions.

Eric returned two months later, reporting that his eye had flared up two weeks prior, and had been consistently red. He was prescribed Fluromethalone eye drops to be used three times daily, and as with the previous episode, his symptoms subsided promptly after treatment was initiated. He was also counselled that oral non-steroidal anti-inflammatory drugs (NSAIDs) could hasten recovery. Given the recurrence, he was advised to return to his general practitioner to have a blood work-up to rule out a systemic aetiology. His results returned a negative HLA-B27 result, along with normal red cell, white cell and platelet and iron parameters.

Three months later, he returned yet again, having woken up with a very red right eye three days prior. He had experienced an episode six weeks prior, which had responded to oral Ibuprofren within three days, but this time taking oral Ibuprofren had not alleviated his symptoms. He was prescribed Fluromethalone eye drops to be used three times daily and his symptoms subsided after two days of treatment.

At each review, intraocular pressures were in the range of 14-16mmHg in both eyes, and ocular health was otherwise unremarkable.

Episcleritis is a benign inflammation of the episclera, the layer of connective tissue that lies between the conjunctiva and sclera. It presents with episcleral injection and discomfort. Episcleritis is typically benign, posing no threat to vision, with only approximately 3% of cases having any associated ocular complications.1 It is self-limiting, usually lasting approximately 21 days.1 Most cases are idiopathic, with approximately a quarter of patients having an associated systemic disorder – normally autoimmune disorders, with the most commonly associated systemic disorders being ulcerative colitis and Crohn’s disease.2,3

Episcleritis is further subclassified into either simple or nodular, with simple manifesting as diffuse inflammation. Nodular episcleritis presents as a welldefined area of elevation, indicating a localised process, tends to be more painful, and lasts longer. It may also present with epiphora.

While episcleritis is usually of no consequence, it needs to be differentiated from scleritis, which may present similarly but has far more serious implications. Unlike episcleritis, scleritis is more likely to be associated with other ocular complications – approximately half of the eyes develop complications including anterior uveitis, keratitis, cataract and ocular hypertension.1 Scleritis tends to present with a severe pain and eye tenderness, which can extend to the face, scalp or jaw. The pain may also be disproportionate to the clinical findings, and is often exacerbated by eye movements. Other symptoms may include photophobia and lacrimation.

Systemic investigation is crucial for scleritis patients as more than half the patients will have an associated systemic disorder, of which rheumatoid arthritis is the most common

Anterior is further subcategorised into diffuse, nodular and necrotising. Diffuse scleritis results in dilation of the deep epislcleral vessels and scleral oedema, and may affect a portion of the sclera or the entire sclera. Nodular scleritis, as with nodular episcleritis, presents with a distinct nodule of sclera oedema. Necrotising scleritis is the most devastating form as it may result in severe vasculitis, necrosis and scleral perforation. Nectrotising scleritis may be with or without inflammation – when it presents with inflammation it is accompanied by severe pain and tenderness, however necrotising scleritis without inflammation, or scleromalacia perforans, presents without pain, and the sclera becomes white, avascular and thin.

Systemic investigation is crucial for scleritis patients as more than half the patients will have an associated systemic disorder, of which rheumatoid arthritis is the most common.2,3

Treatment for episcleritis is not usually required as it is self-limiting in most cases. Before initiating any treatment, a diagnosis of scleritis should be ruled out. Topical steroid eye drops and oral NSAIDs have been shown to be effective in hastening the rate of recovery, however these may result in potential side effects.

Topical steroids may result in increased intraocular pressure and cataracts, and as they suppress the immune system, increase the risk of infection. Oral NSAIDs can have a negative impact on the gastrointestinal system, leading to peptic ulceration. Although systemic NSAIDs have been shown to be effective for treating the signs and symptoms of episcleritis, topical NSAIDs, which have far less risk of systemic side effects, have been shown to be no more effective than artificial tears.4

Being a teacher, Eric was quite conscious about having a red eye so elected to have treatment to speed the recovery. While treatment with topical steroids and oral NSAIDs is effective, it is not without side effects, so patients who are prescribed medication should be monitored. Patients should also have a systemic work up to ascertain any systemic associations.

As recurrence is common, patients should be counselled for the potential for recurrence in the same or both eyes. With time, episodes become less frequent until they cease completely.