Jilpia Nappaljari Jones AM,  a pioneering nurse and Foundation Life Member of The Fred Hollows Foundation has passed away.

Ms Nappaljari Jones was a Walmadjari woman and one of the first registered nurses to work at the Redfern Aboriginal Medical Service (AMS) in 1971. She was a key member of the National Trachoma and Eye Health Program, where she worked closely with Fred and Gabi Hollows. 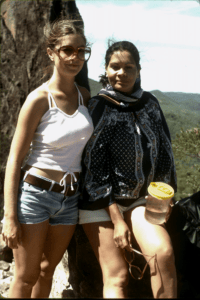 Ms Nappaljari Jones graduated in general nursing, midwifery and ophthalmology and obtained a Churchill Trust Scholarship to study and work at Moorfields Eye Hospital in London.

While on the program, she was unexpectedly reunited with her mother Penny Luck in Fitzroy Crossing, who she was forcibly removed from her as a young child.

In 2008, while being interviewed for a book about the National Trachoma and Eye Health Program, Ms Nappaljari Jones spoke fondly of her experiences.

“My time with the National Trachoma and Eye Health Program was a very influential part of my life,” she said.

“I got the job at the AMS and so began a strong and committed relationship towards the provision of community-controlled health care to my people. 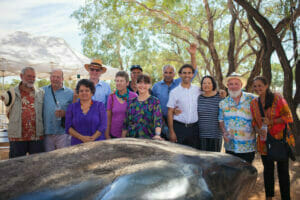 “Fred Hollows taught me to believe in myself and to be equal among all people, even if you walked where others feared to tread.

“The ophthalmologists who worked with the team taught me a lot and I like to think that we in turn taught them about us. It was encouraging how many were willing to learn from us, and that they respected our culture. This was reconciliation in action.”

Gabi Hollows paid tribute to her great lifelong friend. “Jilpia was a darling friend and a beautiful sister who had an amazing life. She was godmother to our daughter Ruth and a member of our family,” she said.

“Jilpia was a trailblazer who paved the way for improving health outcomes for Aboriginal and Torres Strait Islander people. She was also one of The Fred Hollows Foundation’s original Life Members. 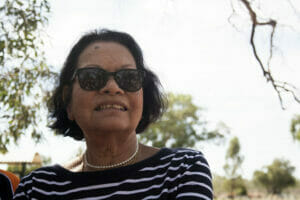 Jilpia Nappaljari Jones in 2016, while on a trip to Bourke to commemorate the 40th anniversary of the National Trachoma and Eye Health Program.

“[During the National Trachoma and Eye Health Program] we often camped under the stars on the side of the road, recapping our day’s work whilst sitting around the campfire.

“Jilpia helped awaken in me, and in those who knew her, a deeper understanding of our First Australians.

“She will be missed by everyone who knew her.”

The Foundation and the Hollows family expressed their sincere condolences to Ms Nappaljari Jones family and friends.