Orthokeratology: Changing the Scope of Optometry 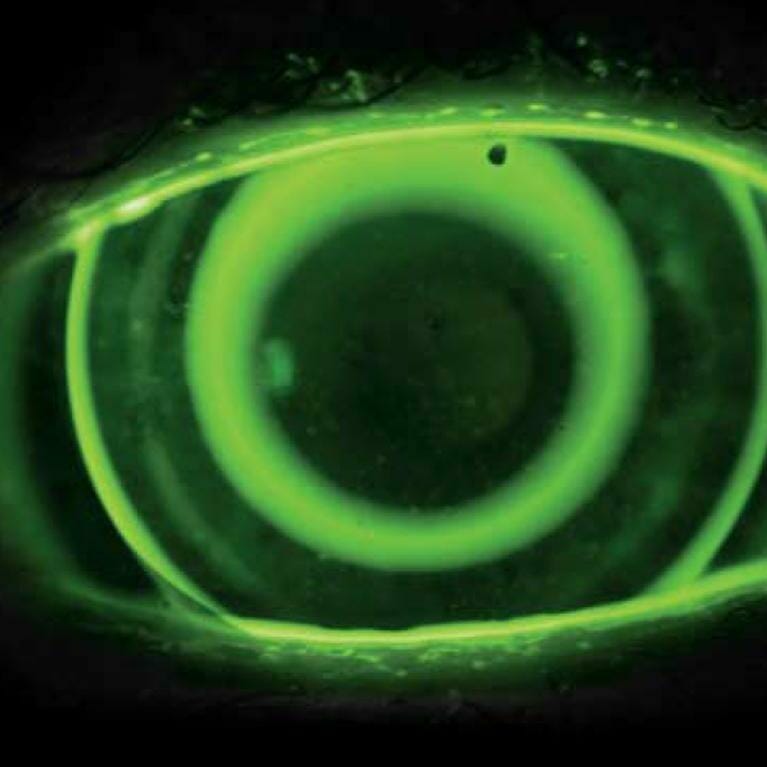 Improve your patient’s vision overnight, literally, and expand your scope of practice with orthokeratology by providing patients with this safe, stable and trouble-free alternative form of vision correction. Following is an overview of modern OK techniques and a discussion of the issues surrounding this innovative, important option for vision correction.

The basic principles of orthokeratology have been around since the ancient Chinese who, according to tradition, slept with sandbags or small weights on their eyelids to improve vision for the next day. The foundations for this technique were first described by George Jensen, who presented a paper on what he termed ‘orthofocus’ in 19621.

Orthokeratology (also known as OrthoK, OK, corneal reshaping, corneal refractive therapy (CRT), or vision shaping treatment (VST)) involves designing and fitting a high-Dk rigid gas permeable contact lens to reshape the cornea to temporarily modify or eliminate refractive error2. OK is an innovative way of wearing contact lenses – custom lenses are worn overnight, temporarily altering the shape of the cornea enough to produce clear, lasting vision after removal and throughout the day. The modern success of OK goes hand in hand with both the advent of the reverse geometry lens and improvements in corneal topography measurement, discussed later.

Who is a Candidate?

Patient selection is critical in ensuring long-term success and a happy patient. Clinical studies into myopic OK have shown that low to moderate amounts of myopia of up to -5.00D respond most effectively.

In addition, corneal astigmatism of less than 1.50DC with-the-rule and 0.75DC against-the-rule increase chances of success. Nonetheless it is not uncommon to hear of successful OK treatments on myopia up to -6.00D3. So far, no studies have directly investigated the safe upper limit of refractive change that is achievable with current lens designs used in OK2.

There are obvious contraindications to this procedure. Patients presenting with corneal pathology such as keratoconus, epithelial basement membrane dystrophy, endothelial dystrophy, recurrent epithelial erosions or severe dry eye are unsuitable candidates for OK.

Communication is the key to success, as is it in other contact lens fitting. Patients need to be informed of the possible visual disturbances of flare and glare, which are related to pupil size, in addition to being taught correct lens care and maintenance. Furthermore, patients must be given realistic expectations. It is a fairly common misconception that at some point the usage of theses lenses can cease and the treatment will remain permanent. Patients need to be reminded that OK is a fully reversible process.

Numerous clinical studies have documented the efficacy of myopic OK and the resulting improved unaided vision4-8. These recent studies show that the large majority of subjects achieve 6/6 or better after treatment. While the main refractive changes induced by OK occur within the first week of lens wear9, statistically significant changes in refraction, unaided vision, unaided contrast sensitivity and unaided low contrast visual acuity occur after only one night of OK wear10.

With these results in mind, it is not surprising that Swarbrick2 found high levels of patient satisfaction with overnight OK in a number of qualityof- life (QOL) surveys. Swarbrick2 also comments that, “Unlike refractive surgery, if patients fail to achieve a subjectively successful outcome, they can cease lens wear and return to other corrective options, such as spectacles or conventional contact lenses.”

How Does it Work?

Conventional rigid lens designs involve a central alignment (back optic) zone which is surrounded by a series of concentric curves, each one progressively flatter than the central alignment curve. In comparison, the reverse geometry lens for myopic OK features a central optic zone fitted flat relative to central corneal curvature, surrounded by one or more steeper secondary or ‘reverse’curves2. Following this is the alignment curve for appropriate lens centration, and finally the peripheral curve for edge lift and tear exchange (see Figures 1 and 2).

In myopic OK, the combination of a centrally flat and mid-peripherally steep contact lens shape induces hydraulic forces in the post-lens tear film, which redistributes corneal tissue to mimic the lens shape. The central flattening, specific to the level of myopia, brings about the change in refraction and allows for clear unaided vision during waking hours. Many previous scientific works have been dedicated to the mechanisms and models occurring during OK treatment; the general consensus is that the thin tear film created beneath the centre of the lens creates shear forces which move tangentially across the corneal epithelium11. The resulting compression12 of the corneal tissue produces a central epithelial thinning together with midperipheral epithelial/stromal thickening.

Optimally fitted reverse geometry lenses used in myopic OK produce corneal topography changes resembling that of myopic refractive surgery such as PRK and LASIK. The change in refractive error after lens wear is described by difference maps. The aim in myopic OK is to produce a central flattened zone, known as the treatment zone. This zone is surrounded by a mid-peripheral ring of steepening which is a result of the reversecurve zone of the reverse geometry lens.

In Figure 3 you will see an optimal myopic OK scenario known as a ‘bulls-eye’, which indicates a lens fitting centrally under the closed eyelid. In this example, after one week of lens wear, the central corneal curvature has become flatter by 3.5D.

The change in corneal curvature achieved in myopic OK is achieved by central epithelial thinning and this has raised concerns about compromise of the epithelial barrier to microbial infection2. Epithelial bacterial binding, considered a risk factor for corneal infection is more likely under hypoxic conditions, which can occur in the extended wear (overnight) contact lens wear situation.

It is disconcerting that patients may feel that OK is unduly risky with reports of more than 100 cases of infectious keratitis since 20012, 3. While this figure makes the practice OK seem rather dubious, there is more to the story. The majority of these reports of microbial keratitis originated in the East Asian region, in particular in China and Hong Kong, where contact lens fitting was previously less regulated. Since these reports emerged, these countries have actively intervened to regulate the practice of OK and to improve safety through both practitioner and patient education.

Now consider over a similar eight year period, an Australian-based study in 2007 conducted by Watt and colleagues13 found only a total of nine cases of presumed microbial keratitis associated with OK, out of which two resulted in a loss of BCVA. Ultimately, safety is more likely to be achieved with ethical and knowledgeable practitioners and educated patients.

Here’s food for thought: can OK be considered any more unsafe than disposable extended wear silicon-hydrogel contact lenses? In the OK overnight-wear modality the lenses are removed during waking hours, rather than worn 24 hours per day as silicon-hydrogel lenses can be. It could be anticipated that the OK wearing pattern could mitigate the safety concerns of overnight lens wear by allowing a waking-hours ‘recovery’ period as compared with an extended or continuous lens wear regimen2.\

Above – Topography analysis showing preand post- treatment on the left. The difference map shows a change of -3.5D of the anterior corneal power.

Another emergent yet controversial topic with OK is its usage in children. Firstly, in terms of lens handling and care there needs to be a clear understanding of associated risks between the patient, parents and the practitioner. Clinical experience has shown those children particularly keen to wear contact lenses are motivated to comply with proper care and maintenance. The age limit varies according to practitioner confidence and patient skill. Soft lens wearers, particularly young teenagers are able to make to smooth transition to OK as the desensitisation to wearing contacts is well established. Comfort is rarely an issue as there is no daytime lens wear and the care and maintenance regimen is analogous to that of a soft lens regimen.

The second part of the issue is myopia control. Large amounts of anecdotal evidence suggest that when correctly fitted, these lenses have shown to slow or halt the progression of myopia, and this is the newest area of scientific contribution to the topic of OK.

Cho and co-workers14 found after six months, the OK lens-wearing subjects already showed a decrease in myopia progression compared to the control group and this effect was consistent throughout the two-year study period. This is certainly a contentious issue amongst clinicians and researchers, however one thing is certain; more rigorously controlled, prospective, randomised and masked clinical studies are required in order to make an educated conclusion.

OK certainly has a bright and promising future. Advances in corneal topography and lathe design are allowing lenses to successfully correct astigmatism, hyperopia and high myopia15. Further advancement may lead to aberrationcontrolled corrections, akin to that in refractive surgery2. In fact, at the 2008 Orthokeratology Society of Oceania (OSO) Congress, delegates were given an insight into the extensive application of OK in post-LASIK, high myopia and keratoconus which is already being practiced in other countries.

With an estimated 2.5 billion people worldwide predicted to be myopic by 2020, optometrists have an opportunity to truly give their patients freedom from their glasses and improve their quality of life. OK has been proven to work effectively and is extremely safe when completed in a conducive environment.

Vijay Mistry is an optometrist in private practice who works with Kate Johnson at Gerry & Johnson Optometrists in Brisbane. He has an interest in rigid lens fitting, particularly orthokeratology. For any queries or comments, please email vijay@gjo.com.au.