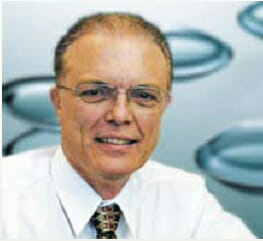 When I was a student the diagnosis of glaucoma was very simple. Most reliance was placed on the IOP measurement and anything over 20mm Hg was considered very suspicious. Looking back at how unreliable Bjerrum Field Screening was, this is perhaps understandable.

The diagnosis of glaucoma is still not always cut and dried but, with the range of armamentarium that the modern practitioner has at his or her disposal, this is now much easier.

One of the first clues that presents itself during a routine eye examination is the appearance of the Optic Disc. Characteristics of a glaucomatous optic nerve include:

Most normal cups have a cup:disc rat of 0.3 or less. A normal cup:disc ratio greater than 0.7 is present in about 2 cent of the population according to K (Clinical Ophthalmology).

It is important to bear in mind that glaucomatous expansion of the glaucomatous optic cup will be superimposed upon the amount of physiological cupping prior to the onset of glaucoma. For example, if an eye with a small cup develops glaucoma the cup will increase, but in its early stages its dimension may still be smaller than that of a large physiological cup. An estimation of cup size alone is therefore of limited value in the diagnosis of early glaucoma unless it is found to be increasing. Nevertheless, glaucomatous cups are usually larger than physiological cups although a large cup is not necessarily pathological. 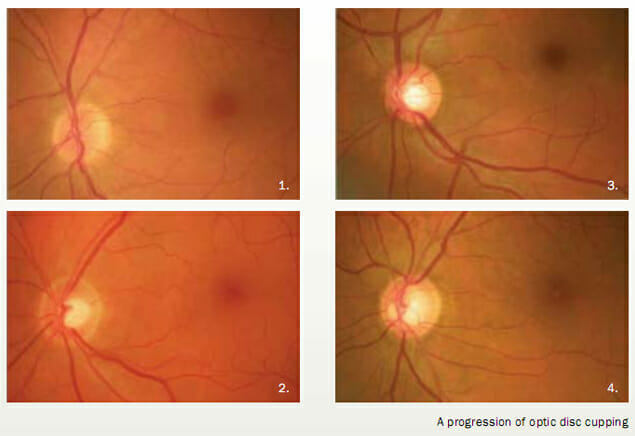 It is also important to stress when assessing the disc cupping that this also depends on the size of the disc itself. Small discs may develop glaucomatous cupping with a small change in the nerve fibre layer and this can be masked because the cup is small relative to a small disc. Similarly, large discs tend to have proportionately large cups which are not always glaucomatous. 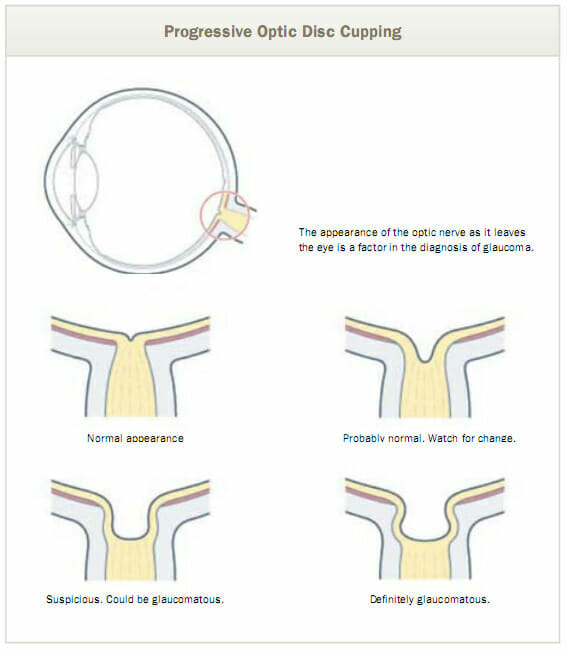 As stated above, the spectrum of disc damage in glaucoma ranges from highly localised tissue loss with notching of the neuroretinal rim to diffuse concentric enlargement of the optic cup. In the detection of early cupping, particular attention should be paid to neural tissue loss, especially in the vertical sectors of the disc. Infrequently, a splinter-shaped haemorrhage may also be present on the disc margin.

By regularly noting the appearance, colour and C:D ratio the practitioner will be more able to detect an abnormal change. This may be by simple notes and sketches or, increasingly, by digital photography with stereo pictures being ideal.

Although this should be done on a reasonable regular basis, a major problem is getting the patient to understand the importance of this and your possible concern in suspicious cases. At a time of heavy advertising by the larger companies on the cheapness of their appliances in order to gain market share, the importance of the eye examination is often denigrated to that of secondary importance. This is to the great detriment of both the profession and, more importantly, to the eye health of the nation. Sadly, everyone loses out.

In the accompanying pictures from the Manual I have shown a progression of optic disc cupping as viewed by the optometrist and also examples of the disc in cross-section to help patient understanding. A one minute explanation of the two extremes of cupping and then pointing out that (typically) your patient lies somewhere between the two will make them understand why you are sufficiently concerned about their ocular well-being that it will be in their interest to return for monitoring when advised. A simple pictorial example and explanation tailored to the particular patient will engender a high degree of compliance – to everyone’s benefit!

Tony J. Phillips, MPhil., FBOA, HD, FAAO, FBCO, FVCO, FCLSA, DCLP, Department of Ophthalmology, Flinders Medical Centre and The Women’s and Children’s Hospital, Adelaide, Australia. Tony is the author of The Optometrist’s Practitioner-Patient Manual which has been designed to help optometrists illustrate to their patients’ procedures and illustrate procedures and conditions to their patients.