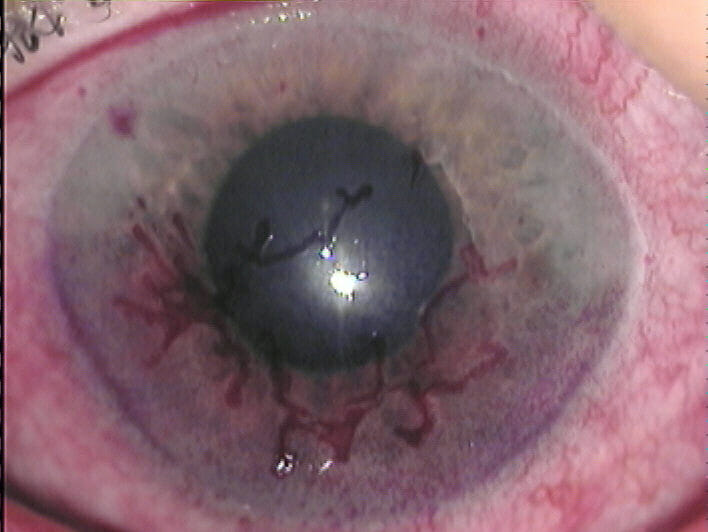 Herpes simplex eye disease is the most common infection of the cornea, but can affect any part of the ocular structures. It affects approximately one third of the world population, with an incidence rate estimated at 8.40 per 100,000 population per year. Here we bring you the second of the two-part series on this highly prevalent disease.

After the primary infection, the virus spreads from the infected epithelial cells to nearby sensory nerve endings and is transported along the nerve axon to the cell body located in the trigeminal ganglion. Recurrent ocular HSV infection has traditionally been thought of as reactivation of the virus in the trigeminal ganglia, which migrates down the nerve axon to produce a lytic infection in ocular tissue.

Reactivation occurs in over a third of patients. Risk of recurrence increases with time – ten per cent at one year, and 63 per cent by 20 years. Bilateral ocular HSV is less common with estimates between three to 19 per cent but more likely in immune suppressed and young patients.

Primary herpes simplex virus infection can cause blepharitis, conjunctivitis, and episcleritis. The pre-auricular lymph nodes are often swollen with associated fever. These manifestations are usually benign and self-limiting in nature.

This initially presents with corneal vesicles that coalesce to form classic dendritic ulcer, characterised by branching terminal bulbs with active infected, swollen cells around the edge of denuded ulcer. The ulcer stains fluorescein and Rose Bengal. The ulcer can enlarge to become a geographic ulcer. The corneal sensation is reduced. In this setting, slow healing geographic ulcers can turn into neurotrophic ulcers. The ulcer edge becomes smooth rather than rolled and swollen.

A variable period after epithelial keratitis, some two per cent will develop ensuring necrotising stromal keratitis or interstitial keratitis which are thought to be immunologic response to direct viral invasion. The antigen-antibody complex manifests as focal, multifocal or diffuse infiltrates, and sometimes forms an immune ring or induces corneal neovascularization.

This is a unilateral anterior granulomatous uveitis (iritis) associated with sectorial ischaemic iris atrophy. The pupil is atonic, mid-dilated and distorted giving classic iris transillumination. Ocular hypertension is common due to trabeculitis.

Herpes simplex retinitis is caused by direct infection of the retina. The clinical presentation includes acute retinal necrosis or progressive outer retinal necrosis. This can affect both immunocompetent or immunocompromised subjects and present with large white peripheral retinal infiltrates associated with vitritis and retinal vascular sheathing. The lesions spread circumferentially and leave large atrophic retina, often complicated by rhegmatogenous retinal detachment. The second eye becomes involved within one to six weeks in two-thirds of cases.

Although there are reported cases of herpetic optic neuritis, more commonly optic neuritis is due to herpes zoster (varicella virus). It typically presents with unilateral optic discs swelling associate with splinter haemorrhages.

Diagnosis of herpetic epithelial keratitis is made by demonstration of a corneal dendritic ulcer. Unilateral iris transillumination with anterior uveitis is highly suggestive of herpetic anterior uveitis. Stromal keratitis with reduced corneal sensation in a setting of recurrent keratitis suggests herpes simplex origin. Diagnosis of acute retinal necrosis is made clinically in most cases but biopsy can identify the virus by direct visualisation with Giemsa stain, viral culture, antigen detection and PCR (polymerase Chain reaction).

The clinical criteria include:

In addition clinical findings of optic nerve swelling, scleritis, and pain all support a diagnosis of ARN.

Neurotrophic ulcer, may lead to corneal perforation or secondary corneal abscess. Long-term use of topical steroid also exacerbates cataract formation. Finally, secondary glaucoma to uveitis is difficult to control even with filtering surgery.

The first line of treatment is anti-viral therapy with either topical, systemic (oral or IV) and local injection of anti-viral agents. Choice of treatment modality depends on severity, extent of tissue involvements and subject immune status.

In herpes simplex keratitis, topical aciclovir is prescribed five times a day to reduce viral load. This could be supplemented with simple debridement of the infected epithelial cells. Additional oral aciclovir is shown to reduce frequency of occurrence. Oral treatment is also indicated in more severe disease, such as necrotising stromal keratitis. Disciform keratitis, endotheliitis and interstitial keratitis are more results of immunologic reaction and responds well to adjuvant topical steroid.

NEI sponsored clinical trials of 700 patients to evaluate effectiveness of oral Aciclovir in stromal keratitis. Some of the important findings are:

Generally, systemic steroid is only used in conjunction with systemic anti-viral treatment in acute retinal necrosis syndrome, with the aim to reduce associated inflammation.

Studies have not shown any significant benefit from corneal debridement versus no treatment, but may enhance anti-viral drug penetration into the cornea.

Due to atonic iris and corneal scarring, intraoperative complications such as iris prolapse, injury and corneal wound leak are more common. Post operative ocular inflammation flare up is difficult to control and requires more intensive topical steroid with risk of HSV reactivation. Finally, capsular contraction is more pronounced and may lead to capsular intraocular lens capture, lens decentration and capsulophimosis.

Glaucoma is one of the more difficult sequelae of herpetic uveitis to manage. Due to ocular inflammation and reduced corneal sensation, corneal epithelial defects are more common and prone to infection. Conjunctival scarring is more pronounced in inflamed eye and leads to bleb failure.