The (generous) Spirit of Ralph Anderl 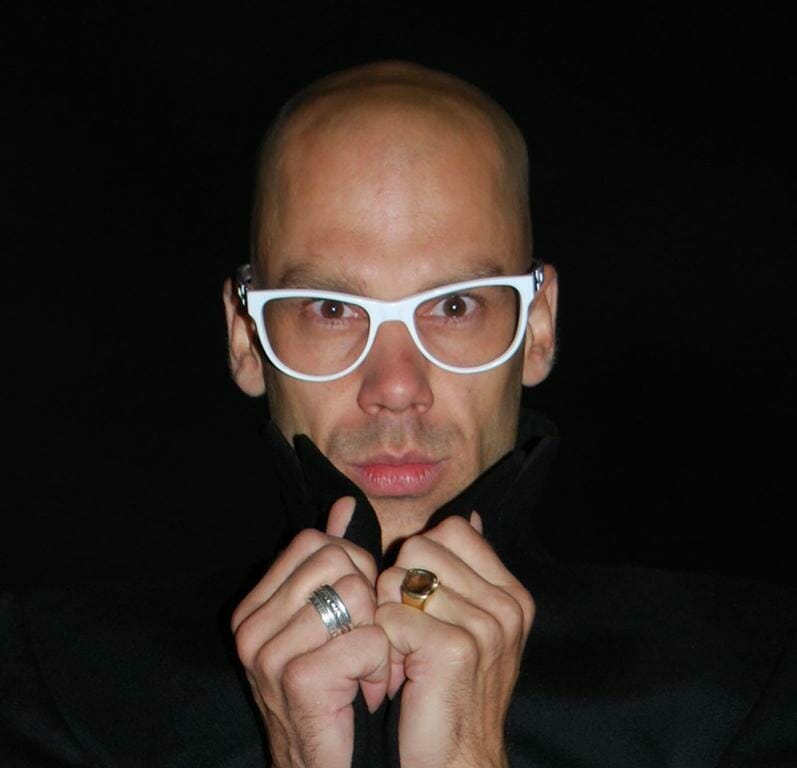 Ralph Anderl, the designer of ic! berlin, is a charismatic entrepreneur and risk- taker who challenges the status quo and surrounds himself with liked-minded people who think outside-the-box. Understanding the importance of generosity as both a way of life and as a business principle, his world is a playground that is both attractive and addictive.

Ralph Anderl’s approach to life and business is based on ‘Cultural Pedagogy’ – the study of the breakdown of culture and its impact on education, literature, politics, music and philosophy.

One of the concepts Ralph studied that he struggles with is that in times of flux, culture dissolves. Rather than the lethargy identified in this, he saw an opportunity to create a sense of community through action.

From this opportunity, the story of ic! berlin was born and has become eyewear folklore …

The Story of ic! berlin

Two of Ralph’s friends had designed a prototype eyewear frame from sheet aluminium with a special integrated hinge and they wanted to approach some manufacturers to sell their idea – and asked their fellow student Ralph to model the frames for them. When the proposals were unsuccessful, Ralph was thrilled as he had immediately seen the frames’ potential and this gave them the opportunity to go into business for themselves.

Ralph readily credits some of eyewear’s ‘royalty’ for assisting in the ic! berlin journey. Robert La Roche, Alain Mikli and Lindberg have all praised his avant-guard styling as has the rest of the industry in Paris when he received a Silmo d’Or for design which ultimately cemented the designer’s credibility.

When asked about past mistakes he has learnt from, he immediately identified a time the company moved away from physical design, to hiring creative designers who had no real understanding of what was possible. Ralph says that he sees that many traditional fashion brands have fallen into a trap of being only focused on what’s on the surface – where beautiful frames are produced in attractive offices in front of a CAD computer.

Now, Ralph employs engineers to create, leading to a more organic approach. They feel and respond to the metal sheets and understand both the limitations and possibilities, drawing also on what they have created in previous collections, so the range has a f low rather than being governed by outside trends.

Empowerment is the Key

Ralph is the type of designer who seeks to empower people with his philosophy. Whilst creating the ‘Très Chic’ collection, he had identified that the brand had a strong male clientele and he wanted to see whether there was also a market for feminine frames. However, he took a step beyond simply having the frames designed by women. Rather, he employed women to work on every facet of the collection.

Another example is Ralph’s collaboration with Jerome Mikli, son of legendary Alain Mikli, who initially approached Ralph for work experience. Whilst young man had no experience whatsoever, having grown up with his mother and not his optical designer father, Ralph identified his potential from a one-off frame that he had created.

Ralph is a keen singer and put his talent on show on a recent visit to Sydney where he sang “Winterreise” by Schubert in a rousing barratone, complemented by an electronic keyboard!

At this party, I discovered Ralph’s nature to be animated and full of energy. One minute he was spontaneously taking a girl’s photograph and posing for images for his upcoming catalogue, the next minute he was tinkering on the keyboard and practising his scales. His enthusiasm is all encompassing and within this forum, I could gauge that eyewear would only be one of many passions and projects.

Naturally he is working on providing fresh designs to the ic! berlin collection, but he also has three yet-to-be published books. In addition, he is in the process of designing mens’ and womens’ jeans – black, simple and comfortable – much like his approach to eyewear. When asked why people would spend several hundred dollars on one of his frames over a brand with a more obvious fashionably credible logo – he immediately states “comfort”.

Many of the designs require special machines to be made in order to manufacture the frames, such as the new milling machine that was created to make the shield sunglasses in the latest collection. Ralph sees this as an investment, feeling that it is far better to invest in having something available in-house rather than outsourcing to potentially unreliable third parties.

He says that in order to guarantee distribution, he always has at least two suppliers for all the materials required, and that while many did not think it commercially viable to have a frame manufacturing factory in the middle of Berlin, he thinks this is what has enabled ic! berlin to enjoy such a great reputation.

A strong political statement has been made with his latest collection. Ralph said he has been very disturbed by what is happening to journalists in Russia and has named each of his frames after a journalist who has gone missing or is in jail.

Ralph believes people on the street are the best models for his brand they are far more able to sell a frame than a supermodel. From this, he is constantly capturing images of people with interesting faces from around the world – adding to the global relevance of the brand. This contributes to his approachability whilst also giving people another layer of ownership. He strongly believes that ic! berlin owners are the best brand ambassadors.

Ralph sees beyond the hype of brands that place extreme emphasis on their own brand identification, and who spend a large amount of time and money shipping their artwork and brand trademarks around the world, to provide a sense of uniform identity at trade shows.

By contrast, Ralph created his latest tradeshow stand entirely out of cardboard. He said at an optical trade fair, the essence of the brand extends beyond the trimmings so he scaled back everything, right back to just a few tables and chairs made out of cardboard which were then recycled afterwards – without the cost of shipping!

He also credits the brand’s success with his own accessibility.

Ralph is the ‘face’ of ic! berlin and often appears in the company’s marketing campaigns. He etches his private mobile number onto each frame he designs (encouraging wearers to contact him) and authors his much anticipated and regularly updated online blog, in which there are several references to his recent Australian trip at: www.ic-berlin.de/blog.php

“To live our vision was, is and always will be one of the most important aims of ic! berlin as we continue to live life with open eyes and recognise the new. And we will, as in the past, target interesting, open-minded individuals, who aren’t afraid to strike out in new directions,” says Ralph.

“Our philosophy has always been to focus on an unconventional concept of a conventional object – such as eyewear – allowing it to evolve into a friend and close partner – a daily companion.”

Sharon Smith is mivision’s fashion writer. Her eyewear columns in Australia and New Zealand have become a ‘must-read’ for both fashion-forward optical retailers and fashion editors.