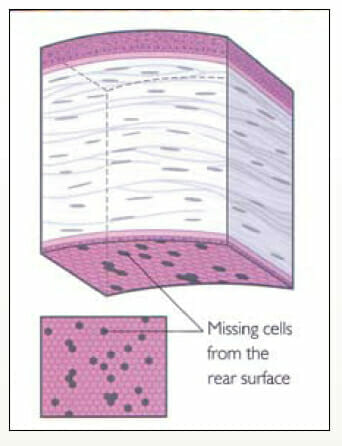 In this third article of the series from The Optometrist’s Practitioner Patient Manual, author and optometrist Anthony Phillips describes the corneal condition of Fuch’s Dystrophy and how to explain it to the patient.

These other signs may include pigment dusting on the endothelium, stromal oedema and thickening and occasional epithelial changes such as microcystic oedema, bedewing and bullae.

Advanced oedema may also produce sub-epithelial connective changes which may be permanent.

Cause of the Condition

As stated above, the root cause of the condition is the slowly progressive formation of guttata lesions between the corneal endothelium and Descemet’s membrane. These wart-like excrescences are said to be abnormal elevations of the basement membrane and fibrillar collagen by distressed or dystrophic endothelial cells. As the lesions enlarge, the covering endothelial cells initially become stretched and eventually fall off. The remaining cells enlarge to cover the gaps but eventually holes appear in the layer.

A stage comes when, because of the reduced number of functioning endothelial cells, the barrier and pump functions fail to maintain the delicate balance and excessive hydration of the cornea begins (decompensation).

Growth of corneal guttata progresses from the centre of the corneal to the periphery. As the endothelial cells are lost, the remaining cells enlarge to cover the gaps. With an increasingly reduced number of endothelial cells, the pump suffers. Endothelial cell attrition rises with increasing number and size of the guttata lesions. The condition is often asymmetric.

As well as the late onset, Fuch’s Dystrophy is also atypical in that there is a much higher prevalence in females, its possible extension to the corneal periphery with age, and the multilayer involvement. Fuch’s Dystrophy may be more common in milder forms than traditionally reported. It should be noted, however, that by age 70, around 70 per cent of the population will show small numbers of guttata but that only 0.1 per cent will have epithelial oedema and bullae formation.

A fairly new surgical approach to the treatment of severe Fuch’s Dystrophy is that of endothelial layer keratoplasty. This very delicate surgery involves excising a thin lamella of posterior stroma carrying normal endothelial cells and Descemet’s membrane from a donor eye, and using it to replace the diseased Descemet’s membrane and endothelium which are stripped from the recipient. The new lamellar graft is held in place by using an air bubble for the first 24 hours with the patient lying supine.

Endothelial keratoplasty has the advantages of not requiring sutures, a much more rapid recovery than full thickness grafting and often a better optical result because of reduced astigmatism. Should complications occur during surgery, a full thickness graft can still be performed. At the moment, only a few surgeons are performing this delicate and highly skilled surgery.

Because of the age group involved, patients with Fuch’s Dystrophy may also need cataract surgery. Great care must be taken by the surgeon in cases of mild dystrophy in order not to damage the fragile endothelium during the cataract surgery. In more advanced cases, a ‘Triple Procedure’ may be performed i.e. a combined lens extraction, IOL implantation and keratoplasty.

General prognosis for Fuch’s Dystrophy is that the majority of cases remain stable or progress minimally and respond to simply anti-oedema therapies.

Keratoplasty, either full thickness or endothelial, usually works well in relieving symptoms and improving vision. There is a more guarded prognosis in the more advanced peripheral cases. One of the major problems for the optometrist is explaining to the patient exactly what is happening. They should be reassured that they will not go blind and that there are therapies that will help. Photochromic lenses will frequently help for general dayto- day activities with clip-on tinted lenses or fit-overs for the brighter days.

In the Manual, I have provided simple pictures that I hope will allow the clinician to explain in simple terms just what is happening. A cross-section of the cornea is shown to scale with three dimensional pictures of the condition and the slit lamp picture seen by the optometrist. An explanation of the pump action of the endothelium is shown in the right-hand set allowing a simple explanation of the symptoms of photophobia and haze.

Further pages (not shown here) illustrate the corneal oedema at various levels to further aid patient understanding. Other pages show corneal grafting. A patient recently seen by the writer, and who had had keratoplasty for Fuch’s Dystrophy, said that this was the first time that she had really understood what was happening – I hope you find it equally useful!

The Optometrist’s Practitioner-Patient Manual is available from the publisher Butterworth Heinemann Elsevier, through the OAA bookshop, or online http://www.elsevierhealth.com.au/Health-Professions/specialty/book/9780750675390/The-Optometrists-PractitionerPatient-Manual/

The writer wishes to thank Dr. Richard Mills for advice on Endothelial Grafting.

Anthony J. Phillips, MPhil., FBOA, HD, FAAO, FBCO, FVCO, FCLSA, DCLP, Department of Ophthalmology, Flinders Medical Centre and The Women’s and Children’s Hospital, Adelaide, Australia. Tony is the author of The Optometrist’s Practitioner- Patient Manual which has been designed to help optometrists illustrate procedures and conditions to their patients.

As I See It: Fair Game

As I See It: The Rural Challenge